Noelle Xie doesn’t believe in impossibilities. When her sister came from Shanghai to visit her on a UNICEF assignment in Zambia, the pair hoped to see Victoria Falls.

Then the driver called out sick. He had the car at home, and it looked like the trip would be canceled.

But Noelle isn’t one to take no for an answer, and she has no patience for hesitation of any kind.

She procured a new car and drove the six hours to the falls herself.

This anecdote tells you almost everything you need to know about Noelle Xie: headstrong and passionate, she is a fiercely determined global citizen who seeks out spectacular and beautiful experiences around the world, no holds barred. Her exquisite taste in art and fashion, as well as her relationships, have been cultivated throughout an extraordinary life, equal parts timing, luck, aesthetic prowess, and sheer determination.

After all, as she said sometime later, “If you want to do something, you can always do it.” 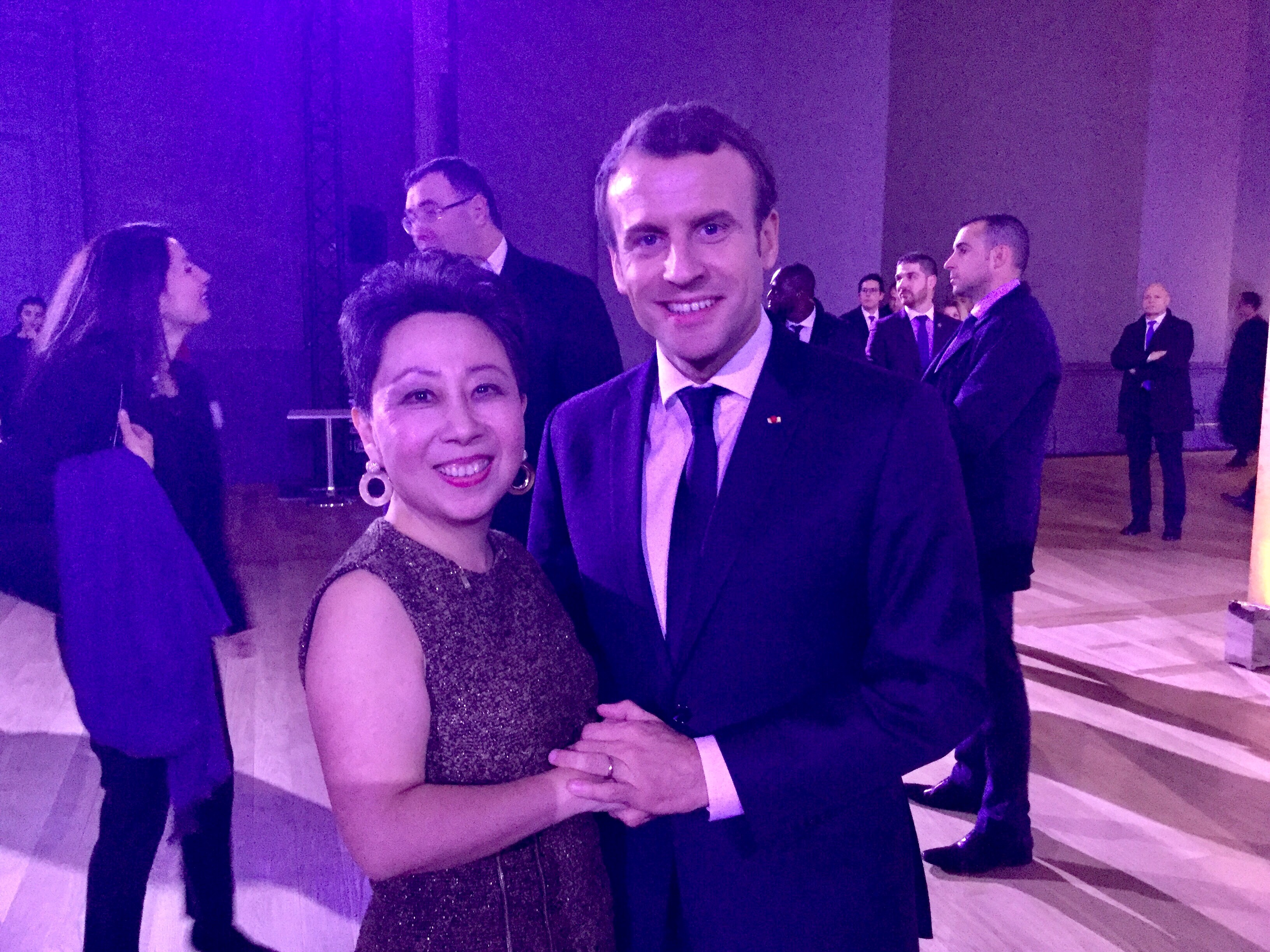 Noelle Xie and President Emmanuel Macron at the One Planet Summit in Paris, 2017.

On March 15th, Noelle Xie will be awarded a Legion d’Honneur, the highest form of recognition in France for military and civil merits. She is the first Chinese-American woman to receive the award. Although she has been a lifelong Francophile, Noelle’s journey to becoming an important supporter of French life and culture that she is today was complicated by seismic historical changes.

Born the second daughter of a government official in Maoist Shanghai, she attended a prestigious school with privileged access. The programming was divided into English and French, and Noelle chose the French track. She met important French personalities who had come to China on exchange (including the future journalist Francois Lenglet) and became increasingly curious about culture in the West.

This only amplified after Chairman Mao Zedong passed away in 1976. Western art and film quickly trickled into China, and audiences hungrily devoured the content—Noelle, of course, among them. She remembered the long line outside a Picasso exhibition, wondering what it would be like to see Western art at museums in Europe.

To that end, the world of Parisian film and art was a treasure trove, “richer and more splendid”. Inspired by Victor Hugo and Honoré de Balzac, alongside American films “Roman Holiday” and “Gone with the Wind,” the flavors and colors of the West delighted her, propelling her forever-after to a life of beauty and adventure. Paris represented a window into a world where art and culture were more than just hedonistic, trivial pursuits. They were the foundations to an identity.

“Paris is the perfect harmony of architecture and the human spirit,” she said. In order to live her most joyful life, she was determined to get there.

Given her education, French was her strongest language after Chinese, so she went after programs in Paris, the city of her dreams. Noelle was fortunate enough to receive a scholarship to attend Sorbonne-Assas, studying international law. It was a huge achievement, not just in terms of how selective it was to receive a scholarship at that time, but for Noelle to pursue her passions.

“You have several milestones in your life,” She explained, “And that was my first.”

Paris, in many ways, was everything Noelle had imagined. The joie de vivre she had aspired to was instantly real, and she marveled at her ability to see incredible Western masterworks with such immediacy at local museums for the first time. But more than becoming a true French woman in many quintessential ways, Noelle’s unique understanding of the Chinese language and culture served her enormously well in her new home.

The year she moved to Paris, 1987, she re-connected with Chen Zhen, whom she had taught French in Shanghai. In Paris the emerging artist studying at the Ecole des Beaux-Arts, and began staging Chinese contemporary exhibitions for him alongside others, bridging cultures from this very young age. Curating and connecting immediately became passions which continue to present day, instrumental in her recognition this month.

From there, it only escalated. After Noelle completed her studies in law, she began traveling the globe for UNICEF and WHO work—first in Geneva, then New York, and then to Zambia, Zimbabwe, and back to the United States. Her knowledge of the French language aided enormously in her international development work, particularly during her travel in Francophone Africa.

She saw firsthand the effects of the tragic AIDS crisis, bearing witness to many deaths and instrumental in other immunization efforts. There were challenges, no doubt, but Noelle did her best to incorporate aspects of each culture she had come across: “Chinese origin. French education. American optimism. African sunshine.”

She believed firmly in keeping a balance between the different cultures in multilateralism. Yet while some compared French visits to an affair with the country, for Noelle, French culture remained her lifelong passion.

As a strong-willed and self-sufficient woman, she faced challenges in professional spaces, often traveling as the only female on delegations. When she needed resilience, she once again turned to French culture: the writings of Simone de Beauvoir and Colette were trusted friends. She found solace in their empowering doctrine, and in its universality.

“The contribution of French culture to our civilization is incomparable…” she said. “French humanism has served many people.”

This mentality ensured that Noelle would never stop pursuing her love of culture and art. She attended art exhibitions wherever her schedule took her and maintained connections with important Chinese artists from her time in Paris for many years. While it was a strong part of her identity to be involved with the art world, for most of her life, she noted, “Art for me was not only about having fun but also finding meaning.” 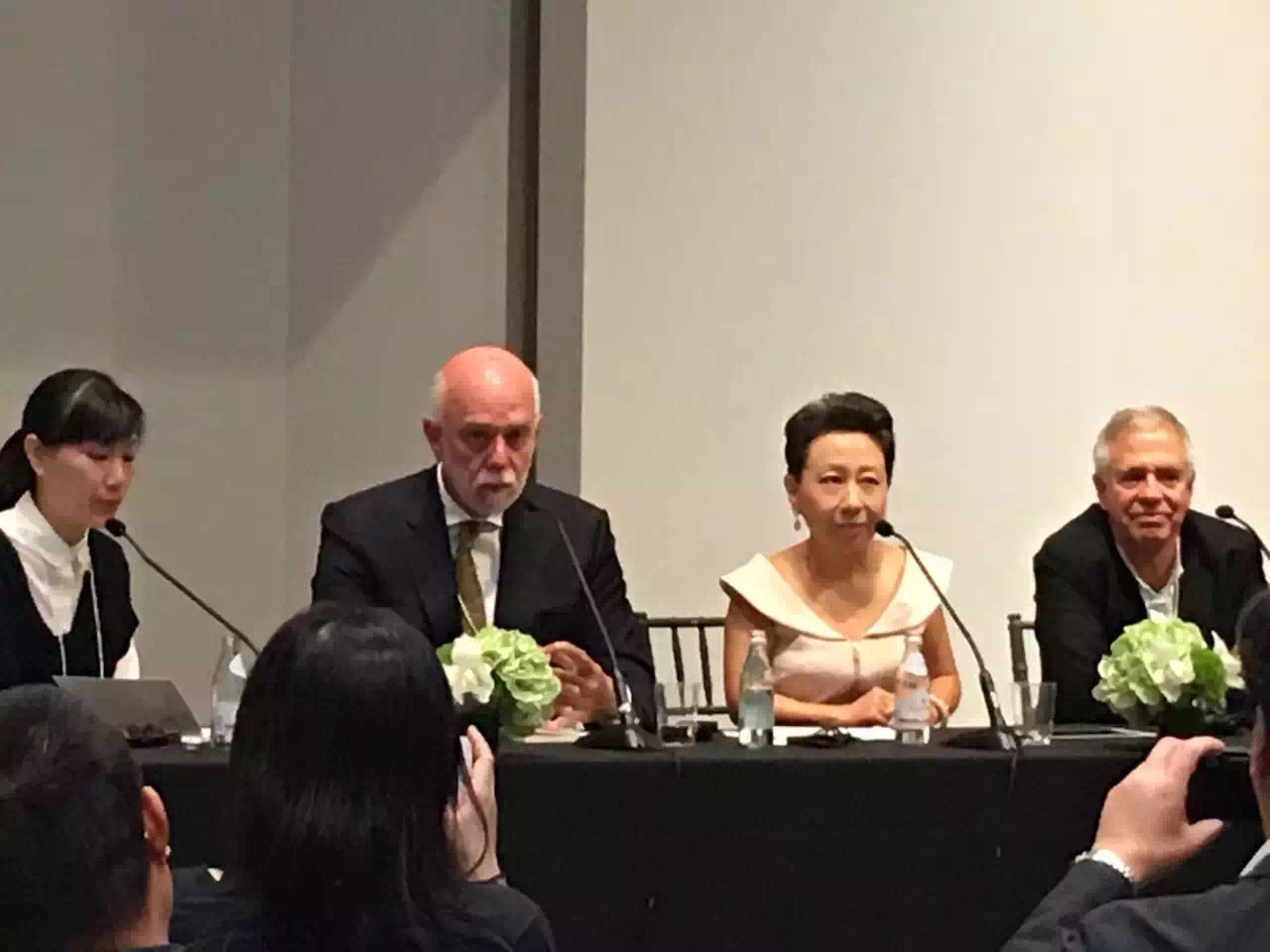 But once again, the changing tide of Chinese history served Noelle timely. As the Chinese economic boom began in the 2000s, Noelle’s artistic bridges became invaluable on both sides of the increasingly globalizing world. Her experience in international development was a further advantage in the high-profile art world. Therefore, the aesthetic aspect of her career took off. She worked as a curator and art advisor, then advised Poly Group in New York, and by 2016, was chairing art panels at the US-China Museum Summit.

Her connections through fundraising in response to the AIDS crisis, such as Princess Eugenie and Ndaba Mandela, also connected Art Basel to benefit UN AIDS. With her multilingualism, multiculturalism, and the same ferocity that drove her to take herself to Victoria Falls, she mobilized resources to raise funds to support United Nation’s health programs.

Noelle recognized the importance of this intersectionality. “In today’s world many things are interrelated… You don’t look at art as an isolated thing,” she said. “They also need support from both the government and business world…It is too hard to work alone.”

With this in mind, Noelle is a facilitator. “My role is just trying to bridge my knowledge and my network to take initiative and to make things happen,” she says.

Her ability to do so has now caught the eye of French government officials, seeking to honor her a contribution to make the world a better place and to promote French culture, art, and language globally.

The plan for the future is to continue to promote cultural exchanges through lectures and exhibitions on the value of her experiential life. She has already spoken at the China Institute, the Harvard and Columbia Clubs in New York, and many international conferences. She hopes that the value of having both an adventurous spirit and artistic ideas comes across.