During the past few days, public outcry and abortion advocacy have surged since POLITICO leaked an initial draft majority opinion repudiating federal constitutional protections of abortion rights. Images of abortion advocacy from the 1970 and ’80s have been circulating on social media – ranging from Barbara Kruger’s iconic “Your Body is a Battle Ground” to the devastating photograph of Gerri Santoro who was found dead in a hotel room after trying to administer a home-abortion. Visual and creative advocacy is a vital tool to raise awareness of the importance of access to reproductive care.

In an election editorial published in 2017, Annabel Keenan uses the resurfacing of images to draw attention to the cyclicality of social and political issues surrounding women’s rights and bodily autonomy.

This weekend, May 6th-8th, the reproductive health festival Abortion Stories will take place in Tompkins Square Park and Cindy Rucker Gallery. The festival encourages participation – Christine Clifford will be taking ‘interior photographs’ of volunteers. A tagline of the project is: “everyone is pink inside.” StoryCorp will be recording abortion stories. Both at Cindy Rucker Gallery. There will be a tent in Thompson Square Park with material allowing participants to thank abortion providers and conversations will take place led by clinicians. Illustrating the despair many feel, but also offering a way forward festival director Cassandra Neyenesch, a writer, holds a handwritten sign stating: “It makes me feel more powerful and hopeful when I am doing something” in a photograph on the website.

The gallery will present a group show and zines by Becky Bailey, Christen Clifford, Lena Chen, Morgan Cousins, Rebecca Goyette, Rachel Gita Karp, Darryl LaVare, Lydia Nobles, Shout Your Abortion BK, and Cat Tyc will be on sale. Molly Gaebe and Jacey Powers will do readings. Limiting access to abortion is a devastating attack on our civil rights. It will affect gender equity and will thereby have a negative impact on the whole population.

As many advocates remind us, politicians have been chipping away at access to abortion for several years. Fifty-nine states passed abortion restrictions in 2019 and Texas banned abortion rights after six weeks earlier this year. Thereafter, Florida, Kentucky, and Mississippi also attacked abortion access curbing women to make choices about their reproductive health. These limitations are not supported by the majority of the country’s population.

In an article published by ARTnews on Thursday, Marilyn Minter highlights that less than 30% of the general population wants to see Roe vs. Wade overturned. She encourages folks to raise money for Democratic candidates to who will support abortion rights while asking voters to turn up at the polls in November. Others encourage donations to local organizations that help provide women care in states that are hit by restrictions. Minter is a long-term supporter of Planned Parenthood and reproductive health advocacy.

Across the world, abortion is normalized in many contexts. In response to the leak, women – public figures and others – are pushing through the noise to share their stories in support of abortion rights. #Myabortionstory and #ihadanabortion are trending on Twitter. Creative advocacy, sharing stories, and showing support is a means to continue to expand normalizing abortion and painful, relieving, or neutral sentiments surrounding them.

The development in the U.S. is counter-acting global trends. Argentina legalized abortion in 2020 and Northern Ireland in 2018. There, advocates are pushing for accessibility to services. It is important to remember that abortion still is legal in many U.S. states and Abortion Stories will be offering information about obtaining the legal abortion pill and have a licensed psychologist available to support those in distress.

Visual culture has played a large role in advocacy – banners, signs, and printed t-shirts help identify and amplify rallying cries for the abortion advocacy debate. More recently cultural workers have instrumentalized the exhibition format to advocate for the cause. In 2019 Jasmine Wahi and Rebecca Jampol of Project for Empty Space organized two exhibitions “Abortion is Normal” featuring over sixty artists at Eva Presenhauber and Arsenal Contemporary. 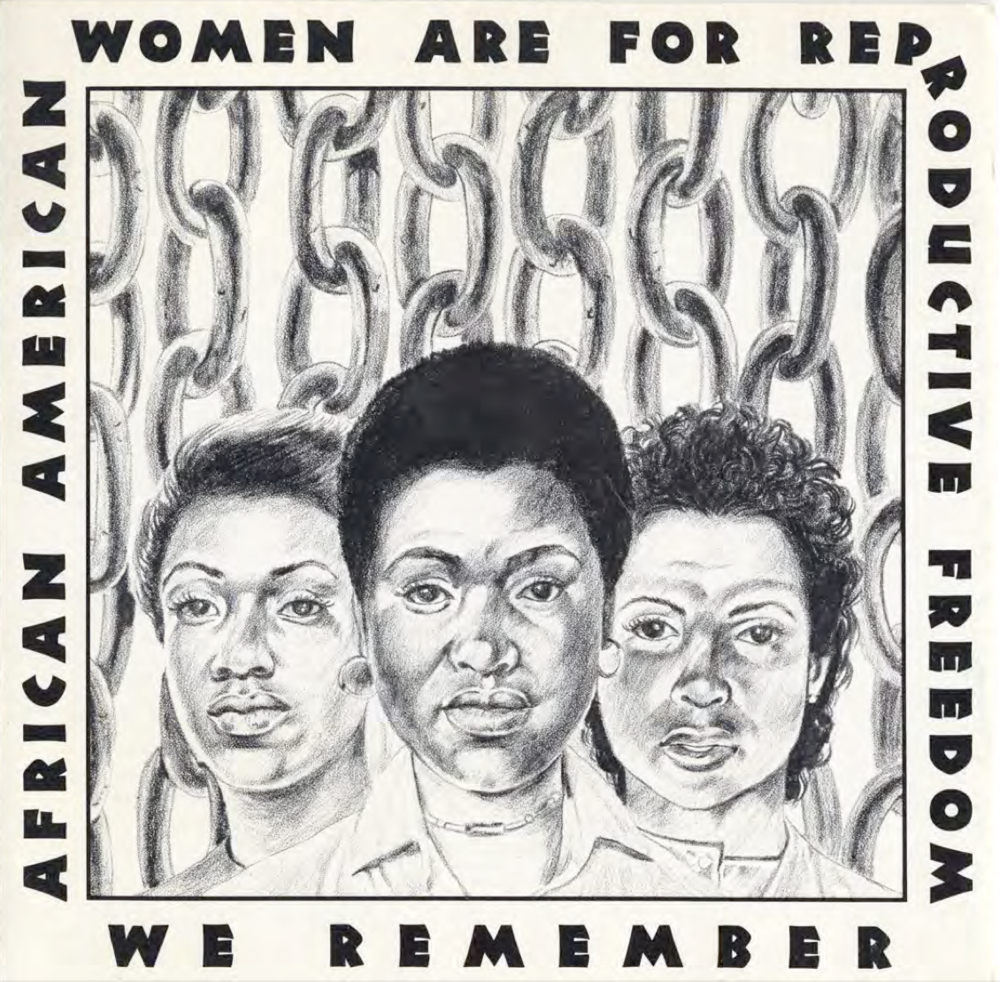 In 1989, 16 black women published a collective statement advocating for equal access to abortion. This followed Faye Wattleton, the first black woman to serve as president of Planned Parenthood, condemnation of the Supreme decision on the abortion rights case Webster v. Reproductive Health Services. Tatyana Fazlalizadeh’s “To Be Without Choice” (2019) referenced the cover of the pamphlet in the exhibition.

Wahi and Jampol are together with a number of artists planning a new exhibition to take place outside of the liberal context of New York City.

Roe vs. Wade is the 1973 decision that guaranteed federal constitutional protections of abortion rights and the 1992 decision – Planned Parenthood vs. Casey, confirmed these rights. If Roe and Casey are overturned it will have devastating consequences for women and (and men’s) physical, emotional, and financial well-being. Furthermore, criminalizing abortion would lead to a rise in incarceration amongst women and abortion providers. About half of the states in the South and Midwest are set to immediately impose abortion bans. In many states abortion will still be legal, however, limiting access to abortion will impact groups who cannot afford to access out-of-state care more than others.