In June, the Princess Estelle Cultural Foundation will present a new sculpture by British-Nigerian artist Yinka Shonibare in the royal public park Djugården in Stockholm. The foundation is named after the Swedish crown princess Victoria and her husband Prince Daniel’s ten-year-old daughter, Estelle. It is supported by private donations. Shonibare is widely recognized for his signature sculptural work and has a history of working in the Northern country.

In 2004, while Shonibare was an artist-in-residence at The Swedish Art Grant’s international studio program (IASPIS) in Stockholm he created works inspired by Sweden’s military and colonial history. For a piece that is now in the collection of the Modern Museum of Stockholm, he created a large ship-in-a-bottle modeled after the Wasa ship, an infamous Swedish warship. It was built between 1626 and 1628 and advertised as the country’s strongest but was overladen with defense equipment leading it to sink on its maiden voyage. In 1961 the ship was salvaged, largely intact, and now serves as a popular tourist attraction housed in a museum on the island of Djurgården. Greed, overconsumption, and gumption are all linked to the fate of the ship, but seafaring also has ties with cross-cultural connections and global trade. Shonibare’s version of the ship dons Ankara textiles as sails. In the 17th century, many of the patterns exported as African were actually Indonesian designs traded to the Dutch and mass-produced in England. The work skillfully weaves these stories together.

A second video work reimagines the masked ball where King Gustaf III was shot. A pattern and dance-heavy resplendent riff off Giuseppe Verdi’s “Un Ballo in Maschera” filmed in buildings originally erected by the king. Adding layers to Shonibare’s thematic, Gustaf III secured one of the few Swedish colonies, Saint Barthélemy, from the French in exchange for their access to the Swedish port city of Gothenburg.

Shonibare’s new commission is more abstract than his previous work in Sweden. “Wind Sculpture in Bronze I” is a towering piece that resembles fabric caught in the wind. The sculpture is folded into an abstract shape and its surface will be covered in the wax pattern that is a result of global trade. It is set to be unveiled in the royal park on June 2nd.

Alice Aycock´s “Hoop-La,” a whirl-wind-inspired sculpture in aluminum and stainless steel from 2014, was the first permanent sculpture to be installed by the foundation in the park. In 2020 it was presented alongside six of her sculptures in the same series. This body of work would serve as the genesis of the new sculpture park initiative on the island. Aycock’s sculptures embedded in the greenery showed how contemporary art and the natural environment could meet. For an art-loving public, it was easy to see the potential of the park for art but also evident that it would require a skillful creative team to manage its creation behind the scenes.

The foundation’s creative director Sara Sandström has an extensive experience with outdoor sculpture and the art market. She opened the gallery Andersson/Sandström in 1980 in the northern city of Umeå, together with Stefan Anderson. A pioneer in public art, Sandström became involved in Umedalens Skulpturpark, a sculpture park in Umeå, in 1998. The collection includes work by Louise Bourgeois, Tony Cragg, Antony Gormley, Anish Kapoor, and Sweden-based Clay Ketter, among others. “Since then, I find that the interest to include art in the public realm has kept growing and many interesting projects have been initiated around the country,” says Sandström.

Continuing to bring an international flair to the Swedish art world, and vice versa, Sandström and Andersson also started Market, Stockholm’s art fair for contemporary art in 2005. It is now the headlining event of Stockholm Art Week.

Shonibare’s work will be installed alongside Aycock’s and Danish and Norwegian artist duo Elmgreen & Dragset whose work was added to the park and the foundation’s permanent collection in 2021. The work “Life Rings” is an almost eight-meter-tall tower of red and white lifebuoys. Made in stainless steel the buoys defy gravity on the shoreline. It is a striking sculpture, in contrast to its surroundings, but also lighthearted and joyful, which is typical for the artist duo.

An ambitious program around Shonibare’s work will take place in the park and with participating institutions –Modern Art Museum, Liljevachs, Magasin III, National Museum, Museum of Ethnography, Museum of Technology, Royal Garden Rosendahl, Royal Theater in Drottningholm, Stockholm School of Economics, University of Arts, Crafts, and Design, as well as the Nigerian and British Embassies– throughout the year. When the monarchy brings art to the public I will happily take a walk in their park to support the cause. 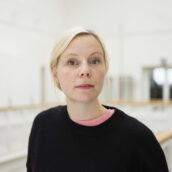 Writer, Cultbytes Anna Sörenson is a Swedish artist based in Stockholm. A sporadic art critic, her writing has been published in Omkonst and Painting is Dead, among others. She graduated with an MFA from Pratt Institute in New York and holds a Post Master from a.pass: advanced performance and scenography studies at Posthogeschool voor Podiumkunsten in Brussels. She is represented by the New York-based gallery Ed Varie and has exhibited her work in Stockholm, Brussels, Berlin, Paris, Mexico City, Miami, and New York. l igram l

Piecing Together the Stories of Art Lost During 9/11