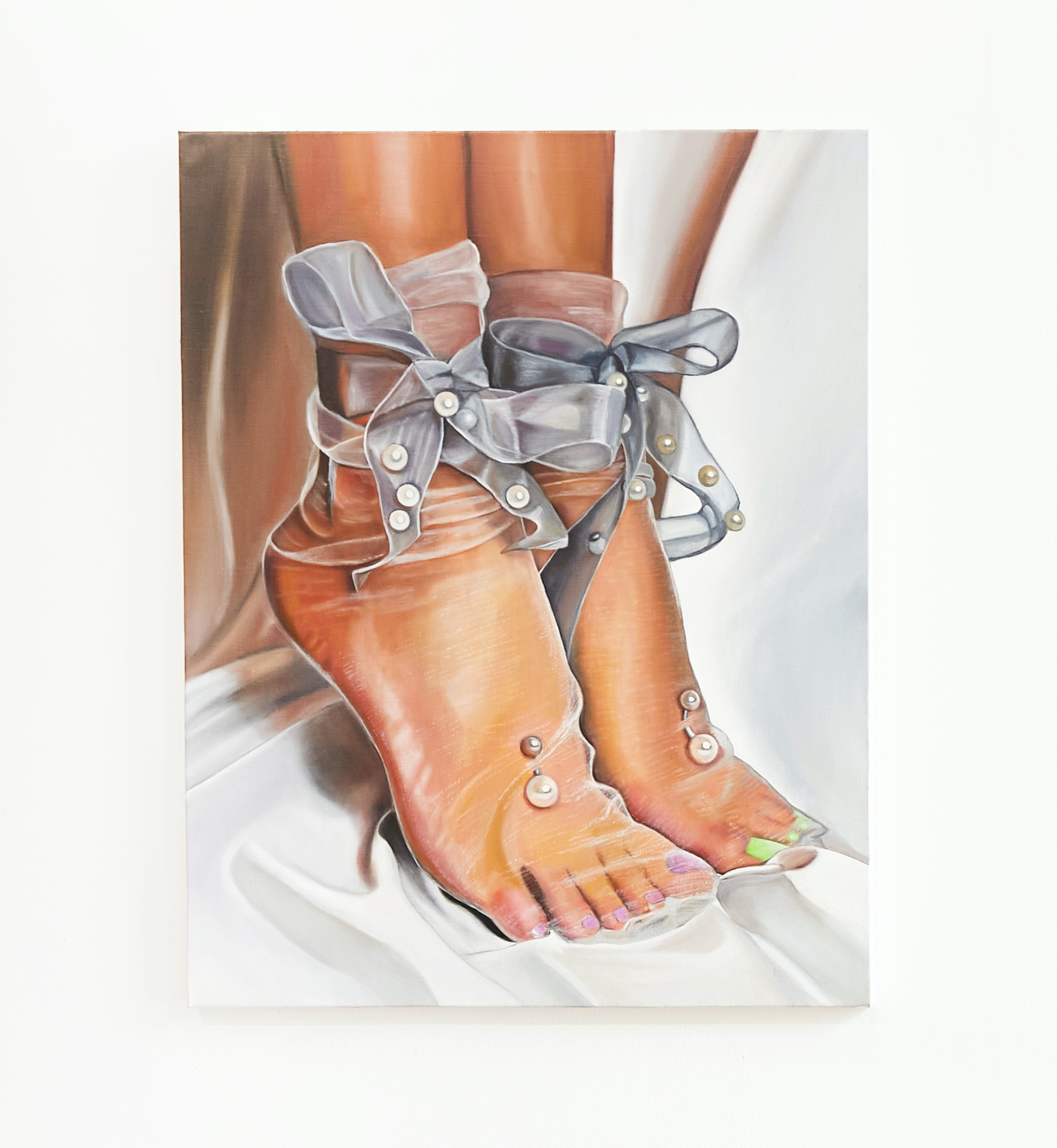 Any occasion in which multiple institutions explore the same subject seemingly out of the blue is worth noting. In the last few months, several gallery and museum shows have emerged asking what exactly ‘fem’ means. The latest to join this investigation is Alchemy Gallery, which is currently hosting a group show that underscores the diversity of approaches to the concept of fem. Featuring Heather Benjamin, Kelly Shami, and Christina Allan, the aptly titled show, Fem, celebrates how three artists define their own interpretation of fem.

A new addition to the ever-growing stable of art institutions in the Lower East Side, Alchemy Gallery first opened its doors in May of 2022 with The End of Play and Infancy, a solo show of voyeuristic, Francis Bacon-esque paintings and mixed media collages by Karim B. Hamid. The gallery’s founders, Jess de la Hunty and Sean Thomas, are former art advisors with over 25 years of experience in the industry.

They started Alchemy after reflecting on the state of the industry. “Sean and I had talked about it for years, but only as an abstract idea based on gaps we saw in the representation of artists we wanted to see showing in New York and that we’d been bringing to the attention of our clients,” said de la Hunty.

Fem is Alchemy Gallery’s second exhibition and first group show. In organizing Fem, de la Hunty wanted to push back against a narrow view of female artists. “Another advisor once commented to me that a male artist we were discussing ‘painted like a woman,’” she said. “This got me thinking about what a “feminine” aesthetic actually meant. Of course the idea of gendered painting is pretty narrow, but I couldn’t help but feel that each of the women in this show bucked any notion of what a female-identifying painter is. They have fresh, bold and unique aesthetics that celebrate the nuanced complexities of the female experience today.”

Included in Fem are four new paintings by Christina Allan. Made with spray paint on canvas, the works feature skeletal, grim reaper figures in vibrant pinks, blues, and reds. Each giant, otherworldly figure is shown zooming by in a cartoonish car. Their creepy smiles and piercing eyes are arresting. The figures appear to be on a mission, staring with determination as they drive by. The titles of Allan’s work, like No Looking Back and Take a Ring Off It, suggest liberation and transformation, the latter perhaps referring to a canceled engagement. Though unsettling, the images are all triumphant, as if the figures are on a journey to somewhere better.

Allan embraces fem as edgy and fierce. Her figures wear chain necklaces with giant pendants and bejeweled rings. In No Looking Back, the skeletal figure holds a flaming cigarette between fingers with sharp, pristine blue nails. A bright sparkle emanates from their ring finger, perhaps given by the person they’ve left behind. No looking back indeed, Allan’s protagonist celebrates their new stage with confidence, leaving hazy fumes and flames in their wake.

The figures in Allan’s work set a triumphant tone for the show and point to a key quality of the word fem: it’s constantly evolving. Interpretations and connotations of fem change in synchronicity with taste and aesthetic. Something fem can be seen as weak, fickle, untrustworthy, excessive, and superficial. At the same time, it can be strong, elegant, loyal, and confident. Fem can be sexy, but it can also be objectified. Perhaps this fluctuating quality of fem is precisely why the term is so fascinating to explore.

Evidence of this variability, very few symbols and aesthetics connect the works in the show. Like Allan, Heather Benjamin explores fem through figuration, though with a very different approach. Benjamin’s highly detailed paintings celebrate the female body with nude, superhero-esque figures who are adorned with tattoos, collars, and thick hair braids. Each figure is depicted in positions that prominently feature their breasts and vaginas. While there’s no denying these are very raw images of naked women, the figures are unapologetic and appear to not care about the viewer. There are no seductive glances or invitations to gawk or even admire. They pose in stances to emphasize their strength and power, owning and celebrating sex and sexuality in a matter-of-fact way. They face the viewer with eyes shielded by sunglasses and set in backgrounds of dense drawings including depictions of luscious greenery, lightning bolts, and clouds. Strong and confident, the women appear fearless.

Benjamin’s background in printmaking and zines comes through in her graphic style. Resembling a dense ink drawing, the figure in Star Girl is a female warrior who poses with her legs widely spread. Across her body are intricate tattoos painted with thousands of small, thin lines, a pattern one would find on an etching plate. She wears cat eye sunglasses and a collar with giant, sharp studs. A locket dangles from the collar, sitting just above her bare chest. She appears poised and powerful, emphasizing the strength of the female body. The work features several butterflies, a symbol associated with growth and transformation that Benjamin commonly uses.

Butterflies also appear in Kelly Shami’s work. In First Time, Shami has painted an anthropomorphized, purple orchid. The shape of the flower is exaggerated in order to closely resemble the shape of a vagina. The flower appears to be floating in space with a green, glistening field behind. The dreamy scene connects Shami with the Surrealist artists she was drawn to growing up. As an Arab woman, she found a connection between the restraints of early Surrealist female artists with the restraints of her own society.

The flower in First Time has several metallic piercings, expertly painted to emphasize the reflective surface. Studs, rings, and charms weave in and out of the delicate petal. At the center, a smiling cat charm dangles, staring right at the viewer. Piercings feature prominently in Shami’s work, a sign celebrating the control of one’s own body. Shami herself experimented with piercing at a young age to express autonomy and creativity. Her works are both self portraits and a continuation of the artist’s creative exploration.

Piercings are also seen in Lucid Dream, a portrait of feet appearing to be propped into a pointed position by invisible high heels. Both feet have manicured toes, purple on the left and green on the right. Two thick posts pop through the top of the foot, an unexpected and slightly unnerving spot. Large studs adhere to both ends of the posts, metal on one side and pearl on the other. The pearls mirror decorative beads that adorn lustrous, silver ribbons on each ankle. A drapery of diaphanous fabric covers the feet, adding an ethereal effect. Elegant, seductive, and edgy, Shami presents an image of fem that is contrasting and complex.

Shami, Allan, and Benjamin show just how varied fem is. The definitions of the term and the visual representations are all fluid and subjective, encompassing a wide range of emotions and aesthetics. Far from an attempt to pinpoint “fem”, the exhibition is a celebration of the indefinable qualities that make up this multifaceted, constantly evolving word.