Katie Bell Brings Both Logic and Chance to Her Playful “ARENA”

It was Frieze Week 2021 when Erin Riley’s second solo exhibition with P·P·O·W Gallery, “The Consensual Reality of Healing Fantasies,” opened on May 7. I had been seeing the tapestries in full and in detail throughout 2020 on my Instagram screen. But as with any of Riley’s work, her skill and mastery of composing large scale in striking detail can only truly be appreciated when seen in person.

How beautifully badass is that? Emblematic of her practice, Riley depicts the pleasure in one’s own body and the embracement of it in self-portraits based on video stills, like Webcam 2. These images feel all eerily familiar being a sexual human being in the digital myself. But that is the point. Though she depicts her scars, tattoos, her entire torso; as a viewer I can still relate and connect. The framing of her body in her works is often through screens and selfies, which she then caringly recreates on in textile, an act that feels ritualistic. Today we tend to overanalyze our bodies, constantly taking selfies trying to see if we still look the way we remember, that we are desirable and wanted, from moment to moment. Frame to frame. For many, it is our own ritual. Riley forces us to realize and reconsider these actions.

Her works are an exploration of her worst and most human tendencies. She embraces the taboo subjects, such as destroying ones own body by obsessively picking at it, and makes it somehow look poetic and beautiful in its tragedy. So much so that even I, a person that has suffered from trichotillomania since the age of 6, did not even realize that Riley was depicting her own rituals with this self-destructive habitat –Anxiety. Riley’s work takes the intimate moments of self-exploration and self-destruction that is created by constant anxiety and makes them available for others to contemplate, on such a scale that one can not look away.

The type of self-destruction she engages in is familiar, the obsession of body, the never-ending judgment, and picking at yourself. No one is ever satisfied in this culture we live in.

After walking through the main room and admiring Riley’s larger than lifesize images of her body and composition books from her youth, jarring interior and exterior landscape scenes, I proceeded into the second gallery room.

The room had six works, four works made with intense oranges, the type of orange one expects The Partridge Family(1970-74) to wear in one of their matching velvet getups singing, “I Think I Love You”. Which oddly enough makes sense. Riley stated on her Instagram account that this series encompassed researching and “trying to find domestic violence pamphlets from my youth or my mother’s youth. (I really want to find the sex Ed booklet I got when I was a kid) I combined and edited the imagery, moving text around adding in different elements, then the tapestries were boiled and I used a bit of thiox on them to make the dye run and fade.” It is that fade that gives these works the feel that I just went into the Herstory Archives and picked up a giant size pamphlet that has faded over years.

The four works were created from threads taken from feminist textile history. The works were created with the gifted yarn (the best kind) from Riley’s friend and fellow P·P·O·W artist Ann Agee, the old wool yarn was from Ann’s mother Sally Agee, who was also an artist.

Agee, a hooked rug textile artist, explored similar themes in her work as Riley. In her textile works she calls attention to contraception, sexualization of children, and infamous court trails with controversial verdicts. She references events that when they became public traumatized a generation, while grappling with personal demons. For Riley it is COVID-19, abuse within relationships, and coming to terms with her “experience of growing up with a single mother who allowed men to be the most disruptive element of the home.” For Agee it is Jon Benet, OJ Simpson, Susan Smith, and smoking. The characters and circumstances have changed, but the history and consequences is sadly familiar and repetitive. It does not matter it seems if it is the 1970s with pamphlets explaining signs of abuse, to murder in the 1990s, women have and continued to sexualized, abused, and exploited throughout recent history. 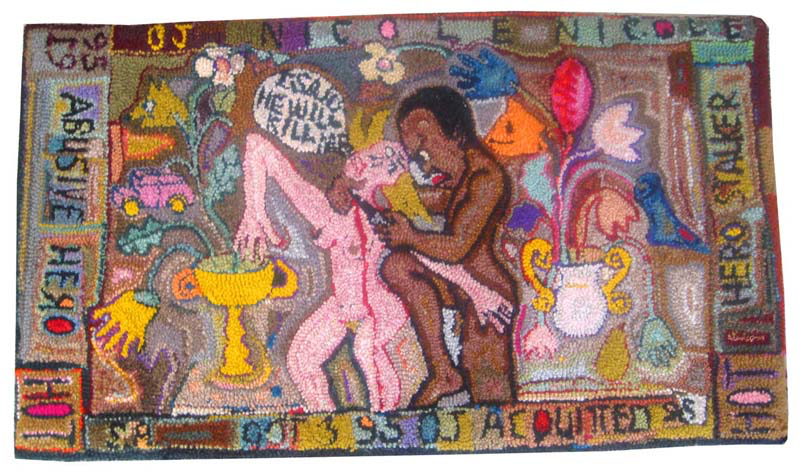 It feels right and appropriate that Riley is able to continue feminist legacy and history within these works referencing important documents of feminist history.

I want to fall into the wall of orange safety. Of not being ignored, to not be told to shut up. I’m angry. I’m frustrated. The orange of Riley’s tapestries is a call to action. As bodies are piling in our streets, social media platforms become breeding grounds for toxicity and self-loathing fueling anxiety – the need to pick and improve your body 24/7 – and embracing sexuality makes us vulnerable to attack, seeing Riley’s work lets me know that I am not alone. They are a blaring Code Orange Emergency.

It is the continuation and exploration that I am excited to see from an artist like Riley. I was first captivated by Riley’s ability and skill in using her own body and struggles as subject, putting her flaws and sexuality on display such as in Depression and Hand, is intimate and personal. Her new works still have this intimate explorative feel but she is now facing in her works the challenges she faces in a more universal sense. The challenges and history that we are all still trying to understand, comprehend, and come to terms with.

Why be complacent? The strongest artwork today is a reflection of ourselves, our society, at its most vulnerable and raw. It is intimate, it is uncomfortable. In fact, it might bring up some overdue conversations. Riley’s most recent work delivers; adds much-needed depth to our current boring, shallow, and yawningly redundant NY art scene. 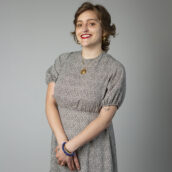 Writer, Cultbytes. Alexandria Deters is a queer femme embroidery artist, researcher, activist, archivist, and writer based in the Bronx, NY. She received a BA in Art History and in Women and Gender Studies at San Francisco State University in 2015 and her MA in American Fine and Decorative Art at Sotheby’s Institute of Art, NY in 2016. Her writing and artwork are influenced by her belief that every human being is a ‘living archive’, a unique individual that has experiences and stories worth documenting and remembering. Photo: Ross Collab. l igram l website l

Tra(n)ce: Ma Tiantian’s Meditation During The Time of Global Anxiety