“Another Kind of Knowledge,” a portrait of Danish architect Dorte Mandrup, encourages a sensual and intuitive relationship to the spaces one inhabits. AIANY Women in Architecture Committee and the Architecture & Design Film Festival organized a screening of the film on March 29th. Bookending the film, ADFF director Kyle Bergman led discussions with Mandrup and the film’s co-director/producer, Marc-Christoph Wagner.

The first building introduced in the film, the Icefjord Centre, functions both as a trailhead and a house for arts and science exhibits. “The Icefjord Centre in Ilulissat is a building that should be understood in regard to the age of the landscape,” Mandrup narrates, over sweeping wide-shots of tundra spliced with footage of the building. “The Greenlandic bedrock is the oldest in the world. We want the building to be viewed as something from a different era.”

The center evidently realizes Mandrup’s ambition. With a gently sloped roof that mirrors the gentle peaks of the surrounding rock and icebergs, the Centre feels primordially embedded in the terrain. It’s organic but rigid, like bone, and in keeping with her signature style, distinctly informed by the landscape. Before the film, Mandrup reflected proudly on a major mark of success for the building: “People [have been] getting married on the roof.”

Mandrup weighs in on a number of her most impressive structures—a massive whale observation center reminiscent of arching whale flukes, a pair of recreational centers in an industrial part of Copenhagen, and the UNESCO visitor center for Denmark’s largest national park with thatching to match the park’s reedy marshland—finishing on a building still under construction.

When the Exile Museum is complete, it will stand over the grave of the main point of egress, often involuntary, for Berliners during WWII—the Anhalter Bahnhof train station. Its sweeping facade will contour a fragment of the original portico—the last remaining ruin of the station. Far from harkening to an imagined pre-anthropocene, the Exile Museum will place museumgoers in conversation with an uncomfortably tangible past. The mass is inspired by generic transit stations, and the interior is constructed in a way that entering it mimics arrival at a terminal. “We’ve worked with the topography of the space,” explains Mandrup, “so you move upwards, and then see the horizon, and then enter the exhibition.” The museum’s main exhibition will detail the history of those exiled from central Europe, and draw a throughline to contemporary crises of forced emigration.

Throughout the film, Mandrup stresses the value of listening to one’s “sensory apparatus” as a source of knowledge. She speaks about the stress often placed on articulating ideas cerebrally, from her upbringing in an academic household and all throughout architecture school, and how it took her a long time to trust ways of knowing and understanding beyond language.

This, at times, can create an almost ironic tension within the film. “Another Kind of Knowledge” is a longer form piece in a nearly ten-year ongoing series of films published by the Louisiana Channel for the Louisiana Museum of Modern Art, in Humlebæk, Denmark. The film is part of the channel’s ongoing project to make films strictly about artists and their art.

“I’m very Stalinistic about it,” Wagner says wryly, in response to a question as to why there are no other interviewees in the film. In practice, that means much of the film sees Mandrup in her least preferred mode—speaking extemporaneously, at length—often about how she prefers other forms of communication besides the spoken word.

Although Mandrup prefers the visual to verbal, she still enlightens viewers with architectural insight on topics ranging from how to retrofit a water tower with attractive student housing, to the anticipation of opening a new building to the public. She remarks: “It’s a bit like sending your child off to school on its first day—hoping that everyone sees its potential and that it makes friends and develops.”

After watching a film showcasing Mandrup’s astounding body of work, one is thankful that Mandrup chooses to sublimate her wisdom into the kind of knowledge that supremely enriches the spaces we inhabit.

“Another Kind of Knowledge” is available to watch for free on the Louisiana Channel. Dorte Mandrup will be back in New York on April 18th for a lecture at Columbia, open to the public. 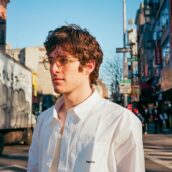 Contributor, Cultbytes Ben Booth is a New York-based writer interested in architecture, film, and critical theory. He has worked in film and television for five years, most recently for ABC’s General Hospital as a script coordinator and social media manager. l igram l