I’m sorry I haven’t written yet. But I promise you that Indian art has been on my mind. Anna Mikaela has only asked me about a thousand times, but we were both so busy gallivanting around North America being exposed to arts and culture that I hadn’t had time to share it with you – the humble, potentially inadvertently iconoclastic general public. Alas, prepare thyselves.

So, the last few weeks have been an Asian blur. This month, I covered the entirety of Asia Week New York in advance of the showcase for the Asian Art Newspaper as based in London. In so doing, I was lucky enough to preview all the art on a whirlwind tour of Manhattan’s upper east side galleries, in an artistic overture spanning the ancient and contemporary worlds of China, Japan, Tibet, Korea, and India/Pakistan (I mean, who can claim Gandhara anyway?).

You’re kind of supposed to be an expert on these things before you publish 10,000 words, but I did a helluva lot of research in anticipation of the writing, and definitely learned a lot after the fact as well. My plan is to build a massive library (both literal and abstractly intellectual) of knowledge for future philosophizing. Also, I’m a pretty legit fan of Indian contemporary art, so I think it’s important to be able to tie one into the other on an art historical level.

Anyway. To deliver an approachable yet rather informative post, allow me to expound on some of the more fanciful aspects of the specifically South Asian art world I was exposed to during Asia Week. Enjoy!

In short, khanjars are decorative daggers. There’s apparently one at the Met, and one was prominently displayed at my new favorite, Kapoor Galleries. They posted the image below on their handy facebook page: 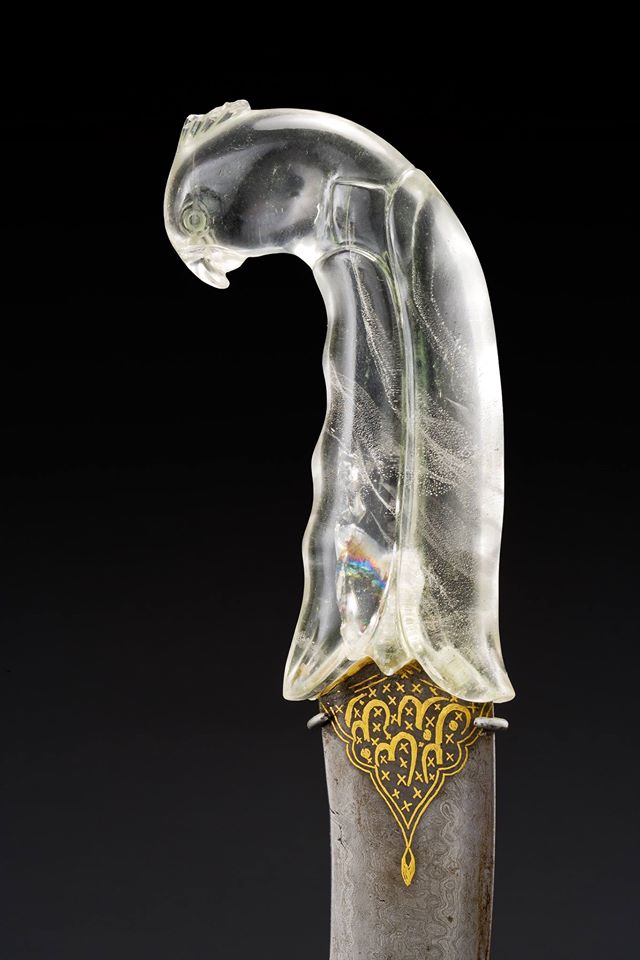 I’m kind of obsessed with these. Bronze deities do not get my panties in a bunch (would that be blasphemy?) whatsoever, but the whole khanjar phenomenon is fascinating. The concept behind the khanjar conjures images of resplendent fabled lands a la Jungle Book (the fab 90s version, obvs #abbreves) or Aladdin, not to mention ever-so ephemeral memories of Jaipur, where I cavorted with polo players and Rajput haveli ‘hoteliers’ I met in my fleeting youth. Woe is me, at the ripe old age of 25, with my yakshi curves sagging from the firm schist that made those rajas swoon.

This particular example is exceptional in its minimalistic elegance. The rock crystal bird makes reference to the Tutinama, which literally translates from the Persian to ‘Tales of the Parrot.’ On a more serious note, the shared interest in storytelling and illustration overlaps Hindu and Muslim heritage. I’d love to learn more about the cultural consistencies and where the tales ultimately diverge.

I wrote previously that other Indian galleries were showing khanjars during Asia Week, but they were unfortunately not flaunting them.

Dalton Somare from Milan had some really incredible sculpture. Dalton and his team were basically what would happen if Miuccia Prada smoked hashish abroad for a decade…sheer Italian-Indian fabulousness. Gandhara was a region that is part of modern-day Pakistan, known for its Greco-Roman fusion into traditional Buddhist art. The features of a Gandhara Buddha are distinctly Western, something which continues to prove fascinating to Anglo-Saxon appropriators and Eastern scholars alike. Personally, I am particularly interested in the facial expressions of Gandhara, as well as the implications of the ancient East-meets-West allusions.

3. The Intellectualization of the Indian Contemporary Art Market

Ok, I tried to publish a whole long thing about this in ArteEast and they never got back to me. Behold the abbreviated version (again with #abbreves! I’m so fancy).

Auction house department heads are always boasting an ‘exciting time in the market,’ but now is actually an exciting time to buy Indian art.

During Asia Week, Christie’s highlighted an extensive family-owned collection of F. N Souza’s oils, chemical paintings, and drawings, offset by a wide range of living artists in a contemporary sale lead by Atul Dodiya (who held a book signing at the auction house on March 16th), as well as Subodh Gupta and Bharti Kher (who happen to be married to each other). Christie’s Vice President Deepanjana Klein explained that the change is rooted in a newfound interest in individualized artists, rather than a collective genre. The ethnicized lens with which Indian art has previously been examined by non-nationals is shifting to be aesthetically, not solely culturally critical.

That Souza’s collection is being auctioned singularly is important in signifying the changing movement.  Not only is it relevant that he was being shown as a solo artist in a major auction house, but the fact that his family is auctioning such a large collection of works is suggestive of changing tides. The Progressive Artists’ Group (also referred to as the Bombay Progressives) has been known jointly following its collaborations in the mid-20th century, yet this showcase indicated that the artist is uniquely respected. M.F. Husain has long been the breakout star of the movement, with his works receiving exceptional millions at auction, so Souza is both joining the ranks and breaking away by becoming a singularly valuable artist in his own right.

Sotheby’s additionally presented a solo auction of V.S. Gaitonde’s. The Sotheby’s press release lauds the collection as “museum quality,” not-so-subtly clarifying the parallel to the upcoming Gaitonde retrospective at the Guggenheim planned for the fall. In successive statements, Vice President Priyanka Mathew explains that Indian artists on view, “have served as international ambassadors of Indian art,” reiterating the potential for artistic merit as an overarching cultural currency.

And with that, I bid you good night.