How American Artists Aligned with Caribbean Resistance at FIAP 2017 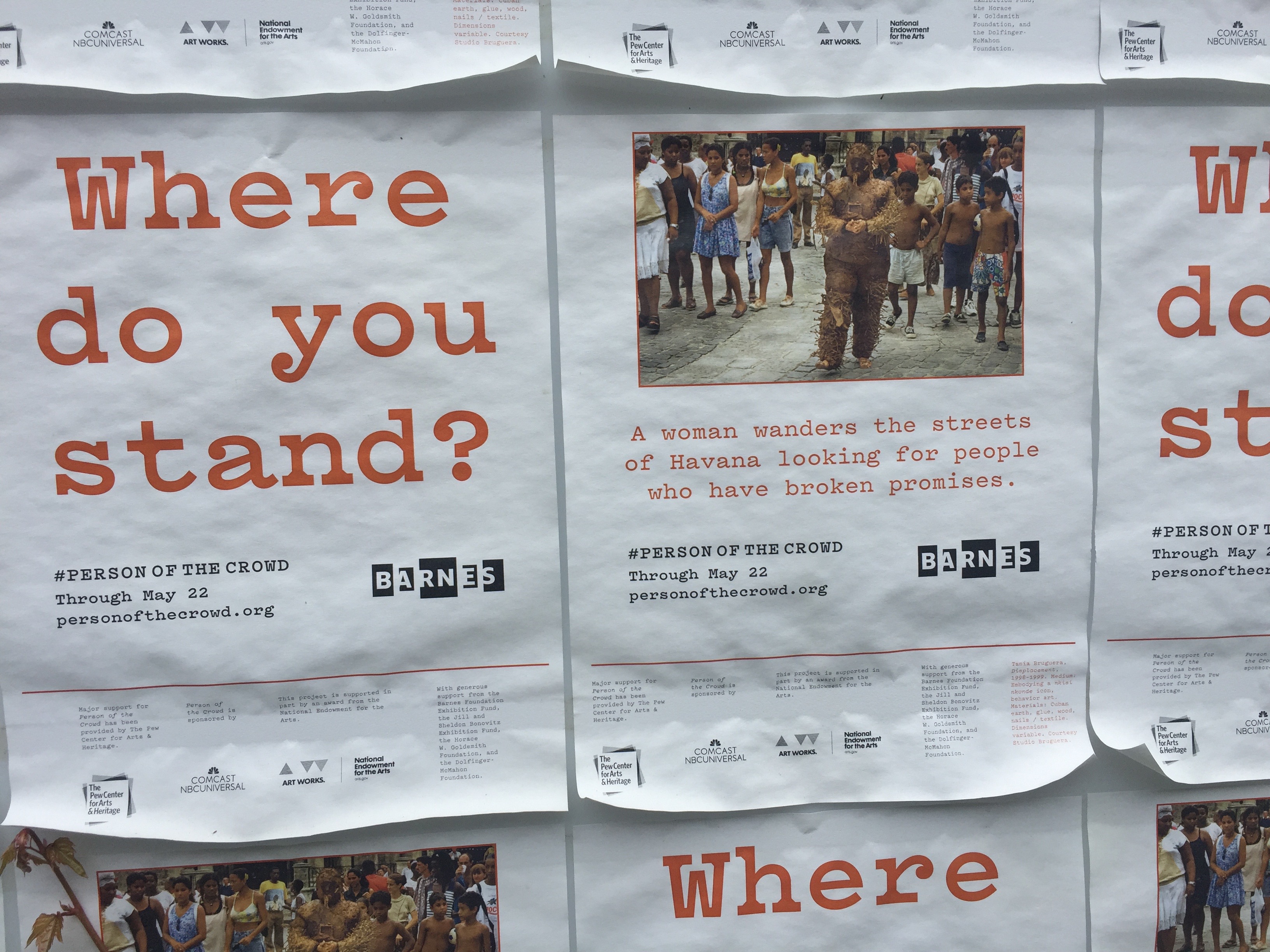 the day after drafting the notes composed into this piece, Marcelline invited Yana to our home for dinner. we were all here to eat, taking in each other’s voices around the sounds of skillet licked chicken and greens sizzling in amish churned butter. between recollections about her 10-hour performance for the Barnes Foundation, i asked Yana what she desired from me chronicling her work. she told me to think about my own view of the project—how i understand the way(s) it sits in the world.

what follows is an eyewitness account of the work of “Throwing Hexes.” get into the surveillance. 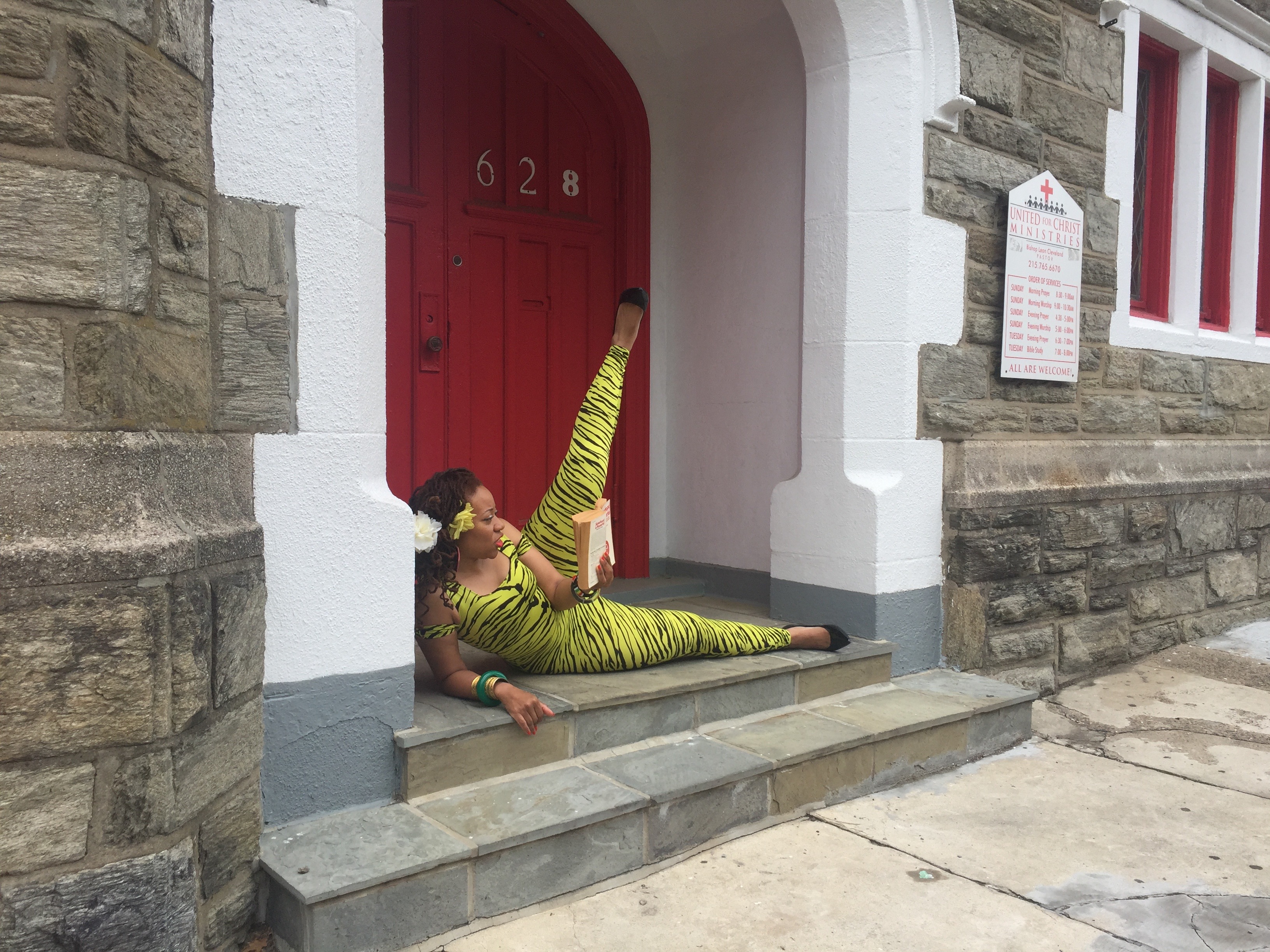 above: Yana begins by reading from carol glassman’s “women and the welfare system.” previous:  #personofthecrowd, 3 month exhibition in which Yana performed “Throwing Hexes.”  all photographs courtesy of the writer.

“it worries me she won’t be able to walk as a result of this one day.” she strides: ball to cement, toe bone to kneecap black heel bound along the barnes parking lot. glimmering, she a spring miracle. black and neon green gowned from the ball to the middle to the neck to the crown. lips licked a simmer of crimson. catch: her eyes flit by in silver shadow, blue wing’d to keep the beat afloat. a creaseless foundation. and how the dreads were laid: pent up, bound in flowers. yes, she bangled: black on gold, silver circling the blood. fruit roll up green at her right hand, her left wrapped in the work of ghana, mali. just below the ulna. and yes, the hex. it dangles right from her head: zebra skin’d and flamingo pink, oscillating in quiet.

Yana enters the foundation’s reflection pool. its rocks chew through her heels to the bone. she is running on bones. “this is not going to work.” she removes, tosses them—launches too the stones she wades through.

an older black woman disrupts Yana’s disruption, says, “you know you look like a mermaid.” “huh?” Yana gazes up out the water, breathless. “you look like a mermaid, splashing through the water.” the two share eyes and laugh. ripples shake into reflection from where Yana chuckles. those around share our cameras with this exchange.

lying in the water of this white institution, the black bones are devastated. ”they’re payless,” and a brief smile. unveiled gold heels and a disappearance later Yana returns, adorned in a dry, less iridescent catsuit. serenity is restored to the the barnes foundation. judith, Yana’s curator, beckons a black car. we move. 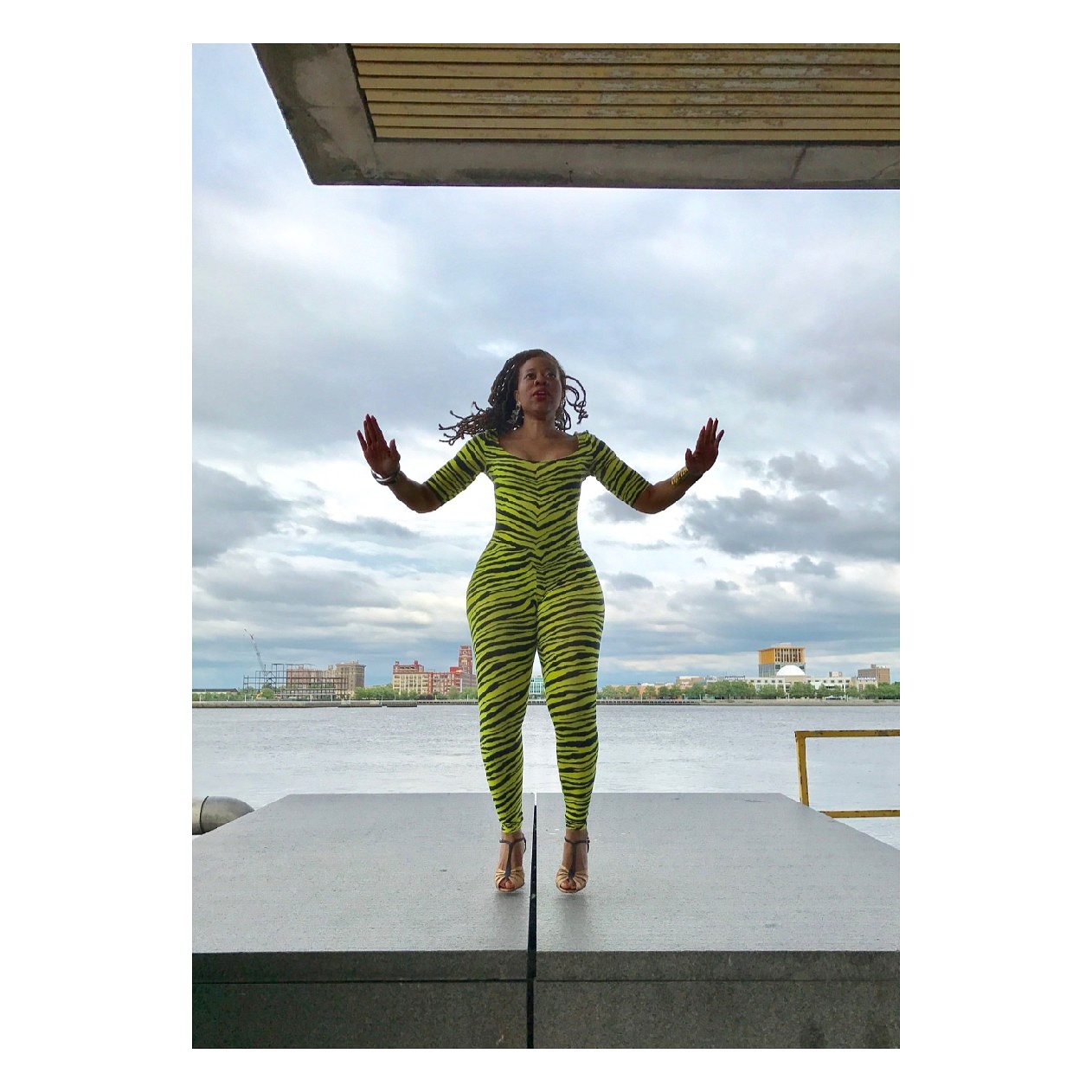 arriving at the base of the philadelphia museum of art, the stage of the 2017 nfl draft looms under the deconstructing hands of a neon skinned workforce. together, it breaks apart what i understand to be an auction block: where white male gatekepeers call black men to their worth, contract naming how long the body must work. the plan to scale these steps as rocky has fails. the auction block reroutes Yana’s performance to the side stairs.

there, Yana invites witnesses to join in jumping jacks next to rocky’s statue. a white man does. cue Yana lifting her golden heels to the top of the stairs, courted by the rocky theme song. cue a picture taking black man playfully yelling, “who throwing apples at me?” as Yana scales backward up a stair of neon catsuit, gagged by a granny smith. we record her.

we move across the city in the blackness of another suv, scrunchy’d tight like buns of 4C.

upon arriving at fifteen thirty one—a south philly home greeting passerby with stucco sharp enough to release the body of blood—Yana cartwheels into and out of the kitchen. she breathes, unveils pictures of Cheryl and Jody, and pours one out for her homies still black & still breathing.

“you know, my fake friends.”

we surveil this rejuvenation ritual, sitting in the space Cheryl will come to make home. offer letters drown the mailbox, as money’d white folk try to buy the space she bought. Yana jokes her friend is the real gentrifier. we exit the house as Ms Ann, Cheryl’s mother, tells us she’s spent her whole life within a 1 mile radius of her birth home. she has plans to go nowhere.

“but people are selling,” Yana recalls.

developments stalk wharton. Ms Ann tells us developers want to turn smith g walter school on wharton and 19th into condos. others want a charter school. “PROPERTY AVAILABLE FOR SALE: For Information Please Visit www.PHLschoolsales.com” hovers several feet out of reach, high enough to see down the block. down the block: checks cashed joint, corner store, empty lot, black fem black child, dreaded bouls in new balances, development clung to the skeleton of a burned down home, “Demolition by Mr Clean, The Demo Machine!”, black man loading a dump truck, trash he did not create, louis bag armed by black fem, weathered american flag fixed out of reach. Yana’s catsuit illuminates all of this, a light for Ms. Ann’s account of histories that will soon lie beneath. she is clear what the imminent future gives, reminds, “come back here in 5 years you’ll see my little house still here, and all the new ones all around it.”

adorned in grid print ephemera, Yana scales the length of sidewalk hugging Ms Ann’s home. her running recreates the work Ms. Ann does to survive a south philly changed around her— the effort it takes to remain here. Ms. Ann opens her door and disappears inside. we adorn doorstep in us, our black and 2 white folk presence. she returns, a “bless this home!” sign visible in the vestibule, to find Yana’s back snatched in a trap of her own design: “I Just Came Here To Find A Husband.” 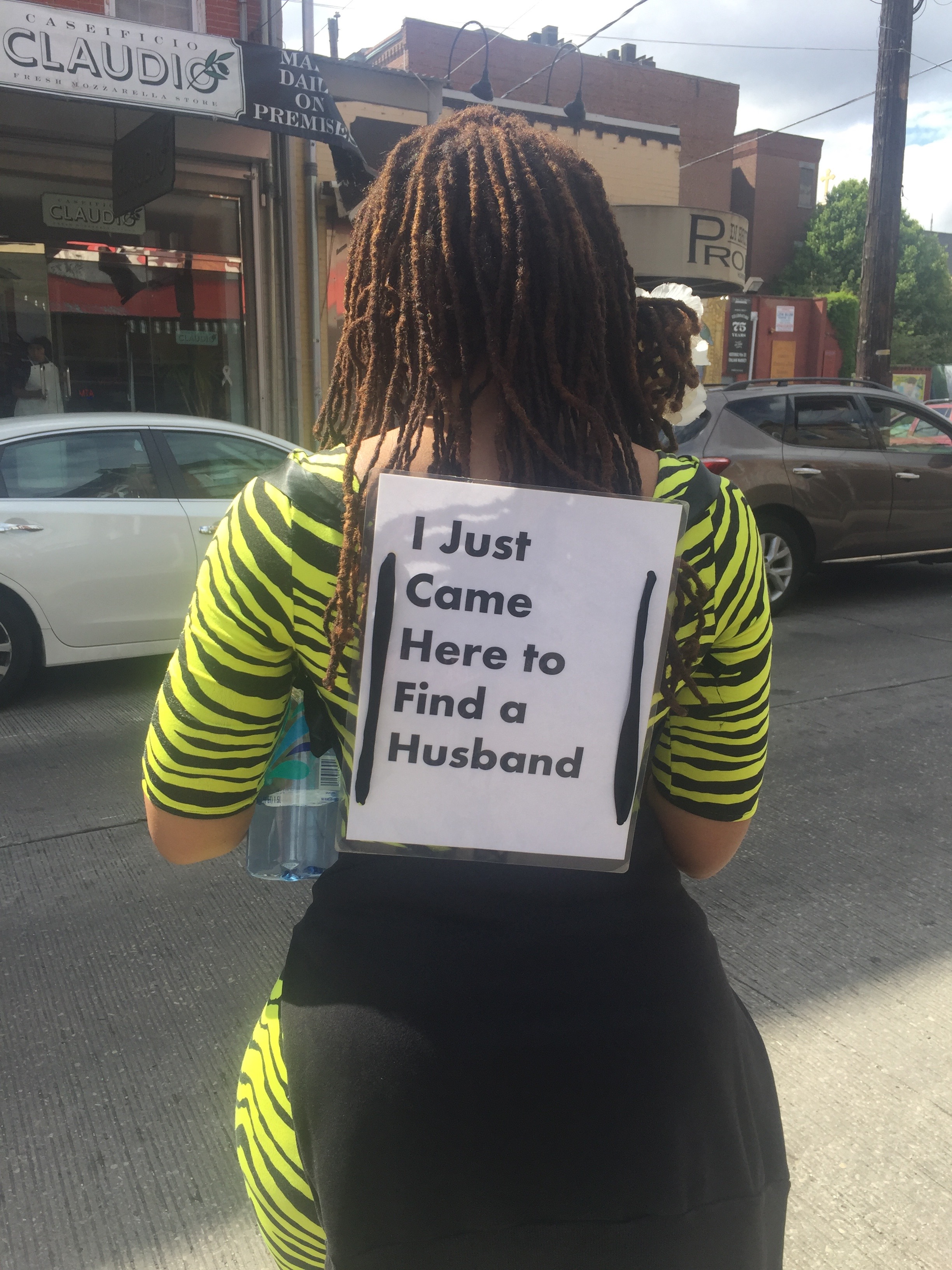 Yana opposite Claudio’s, snatched in a trap of her own design

a white man looking for a wife accompanies Yana as she strides the intersection ‘tween pat’s and geno’s into a group gaze. she hugs him and his friends, across the street and singing common desire, want her to take a picture with their motorcycles. they unveil cameras.

the white man invites her to ride his motorcycle. Yana agrees. as she stretches over—its colors an iridescent green and deep black, like The Lord placed it right there, right on time—he admits, “i knew i bought this bike for a reason.” helmetless and clinging to a white man on two wheels, Yana disappears around the corner. we watch her.

when she returns, we move up 9th street into di bruno’s, canulli bro’s, claudio’s. Yana jumps jacks, scales the cannuli bro’s sidewalk to catcalls and we move, walk beneath frank rizzo’s beat. Yana lies beneath him and lifts her legs, indifference a creaseless shadow stretched across her catsuit. i think of the small hands circling the school in mural on 19th & wharton. i think about us scaling parts of philadelphia that will not be here in 5 years time, locations losing the people who know these streets. i think about all the eyes we have caught: a mostly black fem group of iphones, cameras, notebooks, curl pattern—holding Yana up like a hill. a hill of black bones.

i look up at rizzo’s beat to take my eyes back, and exit the work of “Throwing Hexes.”

you have reached the end of my surveillance. 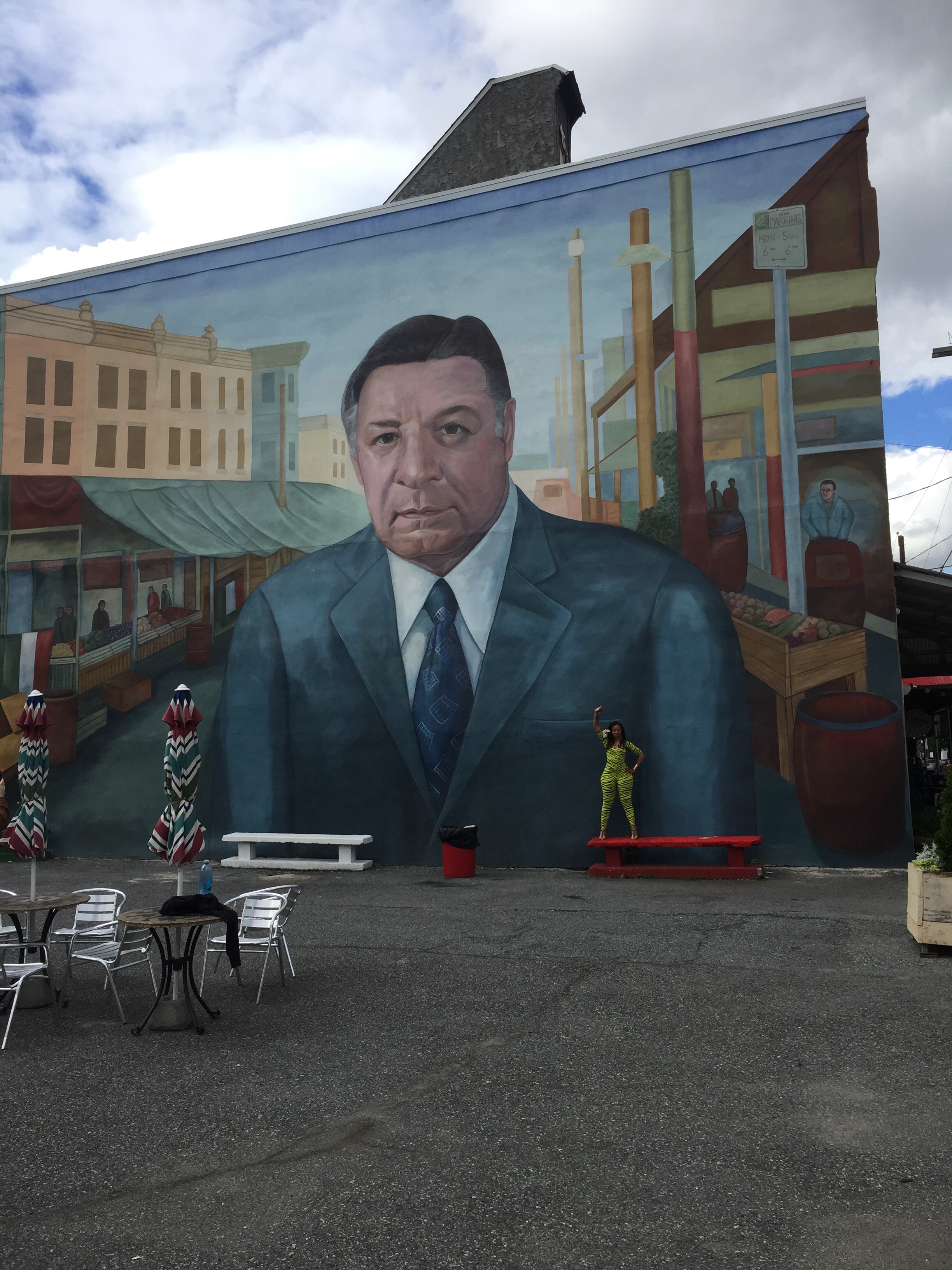 Yana holds her black fist up beneath Frank Rizzo’s beat

Ayana Evans work “Throwing Hexes” was commissioned by The Barnes Foundation as part of their exhibition “Person of the Crowd: The Contemporary Art of Flanerie” in May 2017.

Guest Contributor, Cultbytes Senegalese-American poet, musician, and dancer from Pasadena, CA. Currently based in Philly, Cheikh spends his time working in syringe exchange, learning Ableton by trial and tribulation, singing something of the soul, and doing his best to listen to the ghosts that linger, loom, and stir up "trouble." He is deeply impacted by and centers the intersections of blackness, queerness, and femininity, and how the black queer body becomes. l Twitter l Instagram l