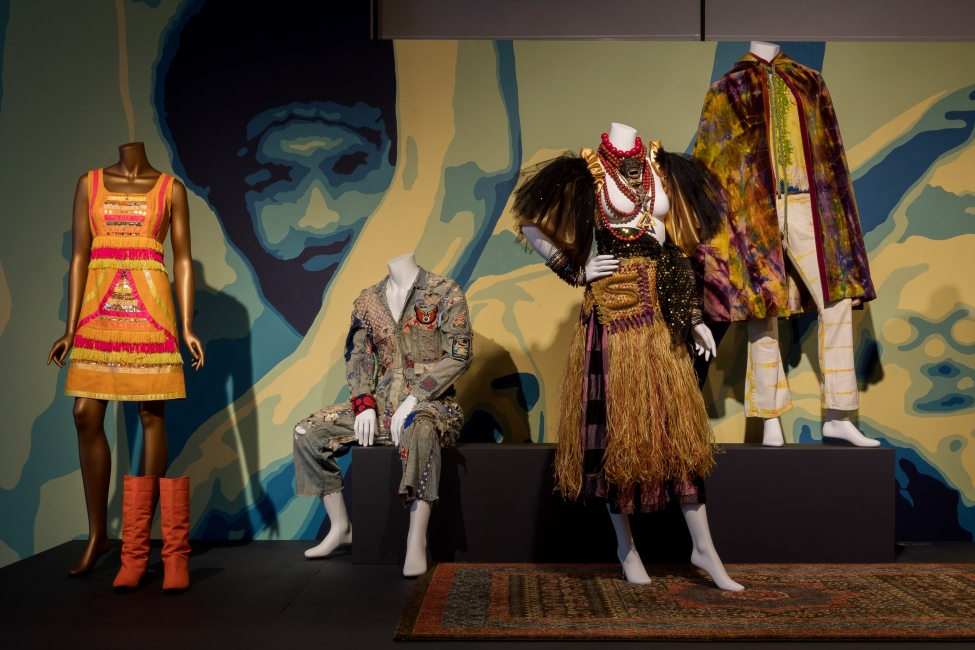 “Counter-Couture: Handmade Fashion in an American Counterculture,” a large exhibition taking over two floors of the Museum of Arts and Design, opened on the first of the month. Coinciding with the start of Armory Arts Week in New York City the bustling lobby attested to interest in the exhibition from both locals and those in town for the plethora of fairs. The show focuses on a period from 1965 to 1975 through a grouping of handmade fashion designs from primarily non-professional clothing designers who came of age in the counterculture. The exhibition, curated by Michael Cepress, was first staged at Bellevue Arts Museum in Washington. Then, it closely adhered to the work which fills the pages of “Native Funk and Flash” by Alexandra Jacopetti. In the book, that was published by Scrimshaw Press in 1974, Jacopetti recorded personal manifestations of the handmade through people closely associated with the Baulines Craft Guild near San Francisco. By including pieces from their own collection MAD’s curators Shannon R. Stratton and Barbara Paris Gifford further explore the diversity of the hippies and non-conformist makers in flower power America.

The ambitious installation includes not only clothing on mannequins, jewelry, and accessories, but also commissioned fabric designs for wall paper and as hanging backdrops. Wood-paneled wall treatments hopeful to evoke the domestic interiors of the period contrast the vibrant colors of the works on view. Creating striking montages, tapestries and wall hangings from MAD’s permanent collection are interwoven with fashion showcased on pedestals. The garments on view offer a variety of textures rich in embroidery, dyeing, and printing. To reinforce the idea of the counterculture as heavily based in self-expression the exhibition design itself is unique. 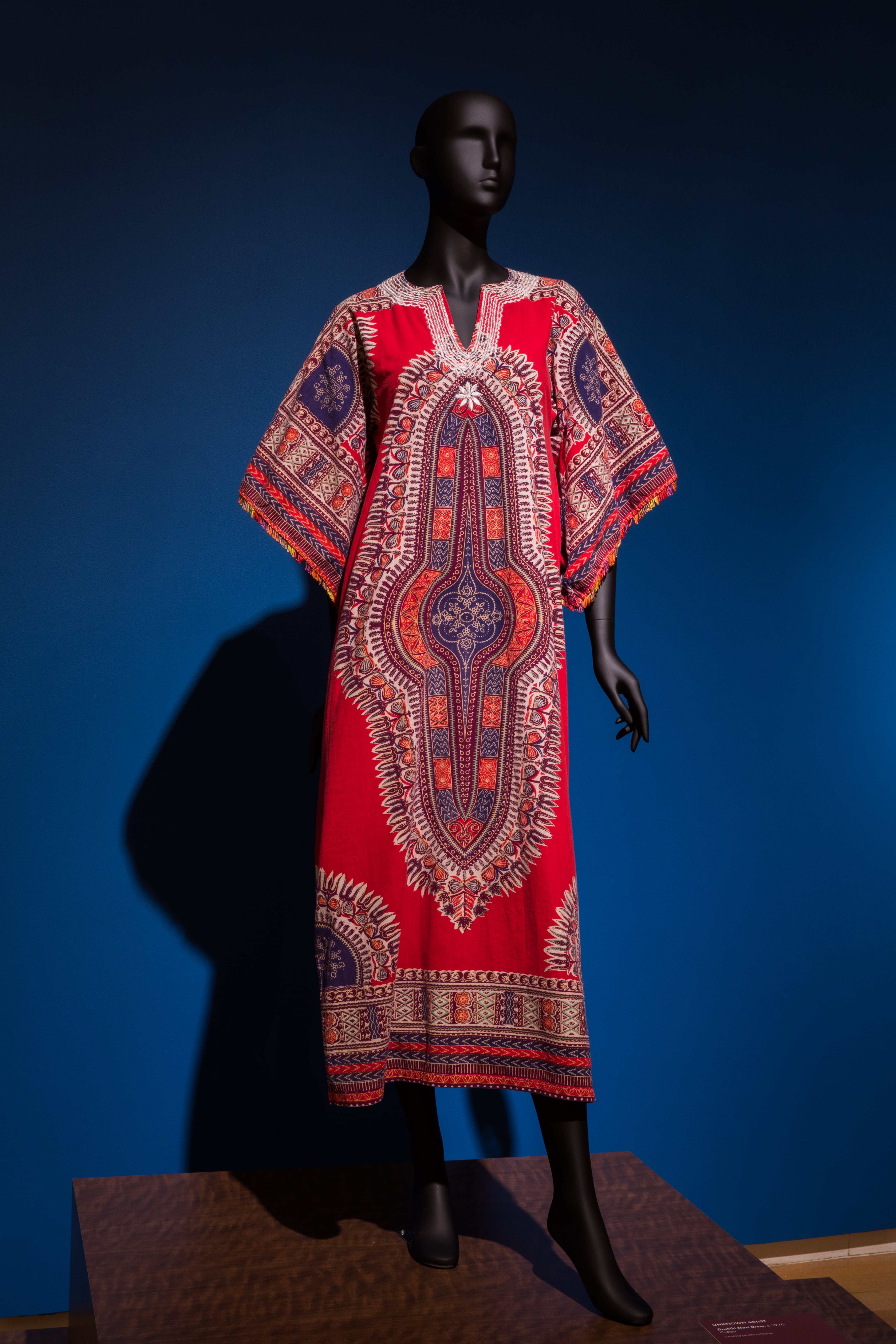 Daishiki. Photo courtesy of the Museum of Arts and Design.

“Women’s Dress,” 1970, Zubin Levy. Photo courtesy of the Museum of Arts and Design.

Wide-spread disapproval to the Vietnam war, race riots, at a time when xenophobic rhetoric was rampant in America, makers turned to traditional African, South American, Indonesian, and Middle Eastern cultures and techniques of making as an outlet to mine design inspiration. As the exhibition makes clear in its emphasis of montage, the American makers wishing to connect to alternative value systems often did so by combining motifs from different cultures.  The “Dashiki” was an iconic fad of the 1960’s started by the civil rights movement in an attempt to explore their African roots. In the exhibition, this traditional West African dress form is showcased a couple mannequins away from Zubin Levy’s “Women’s Dress, 1970” to illustrate their similarities. Both pieces share designs which highlight the cut of the neckline through silhouette across the entire width of the shoulders and are of similar sleeve and dress length. In 1978 Yvonne Porcella published her book “Five Ethnic Patterns,” although she made the two “Patchwork Dresses” on view in the exhibition in 1972 they tell of a plethora of merged design motifs. Exemplifying the blurred boundaries between art and lifestyle, these hybrid objects represent romanticized or imagined ideals of pre-industrial, folk, and alternative lifestyles. 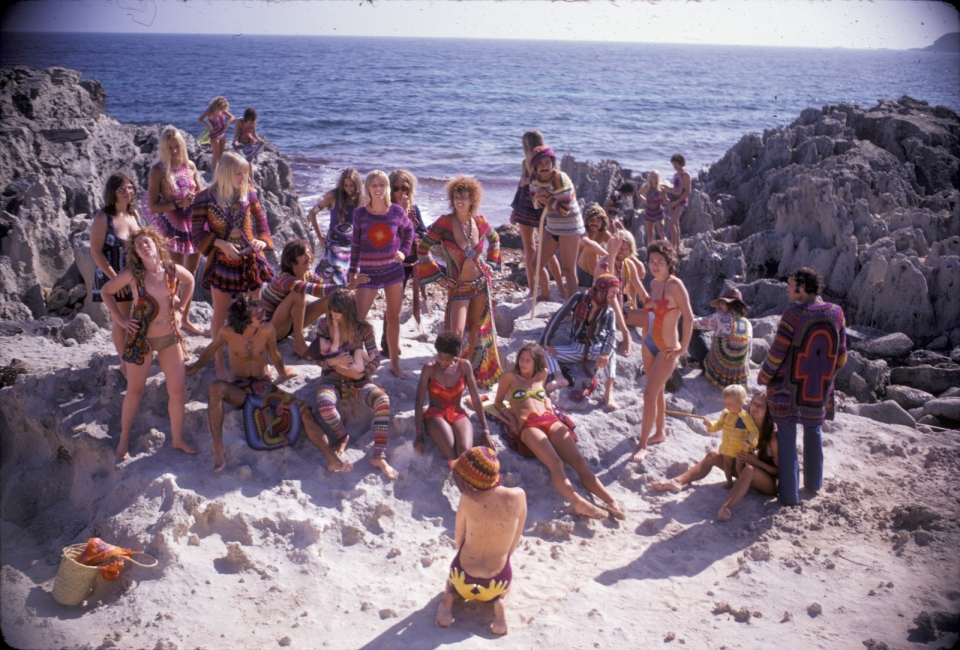 Broad themes of the counterculture are considered in the exhibition: the inherent patriarchy of religious cults, the disruption and trauma of war, as well as LGBTQ communities dismissal of gender restrictions through performance, lifestyle, and physically through dress. Personal histories and quirks bleed through the designs, Alexandra Jacopetti Hart embroidered the hem of her “Orgasm Jeans Skirt” following a vision she saw while climaxing with her husband. Stage clothes worn by The Mamas & the Papas, folk-singer John Sebastian, and The Cockettes had the potential to inspire hundreds if not thousands, are also on view. The exhibition clearly shows the breaking of boundaries between high and low, formal and casual, and gendered fashion. The Cockettes, an avant-garde psychedelic gender-bending theater group based in San Francisco, wore their outrageous handmade outfits both  off and on stage. Arguably, these are fuller considerations of the garments than their creative production. A particular set of fashion exhibition attendees may wish to consider technical design data above the social concerns of the period, the intricate outfits and photographs provide ample opportunity to get lost in these aspects. 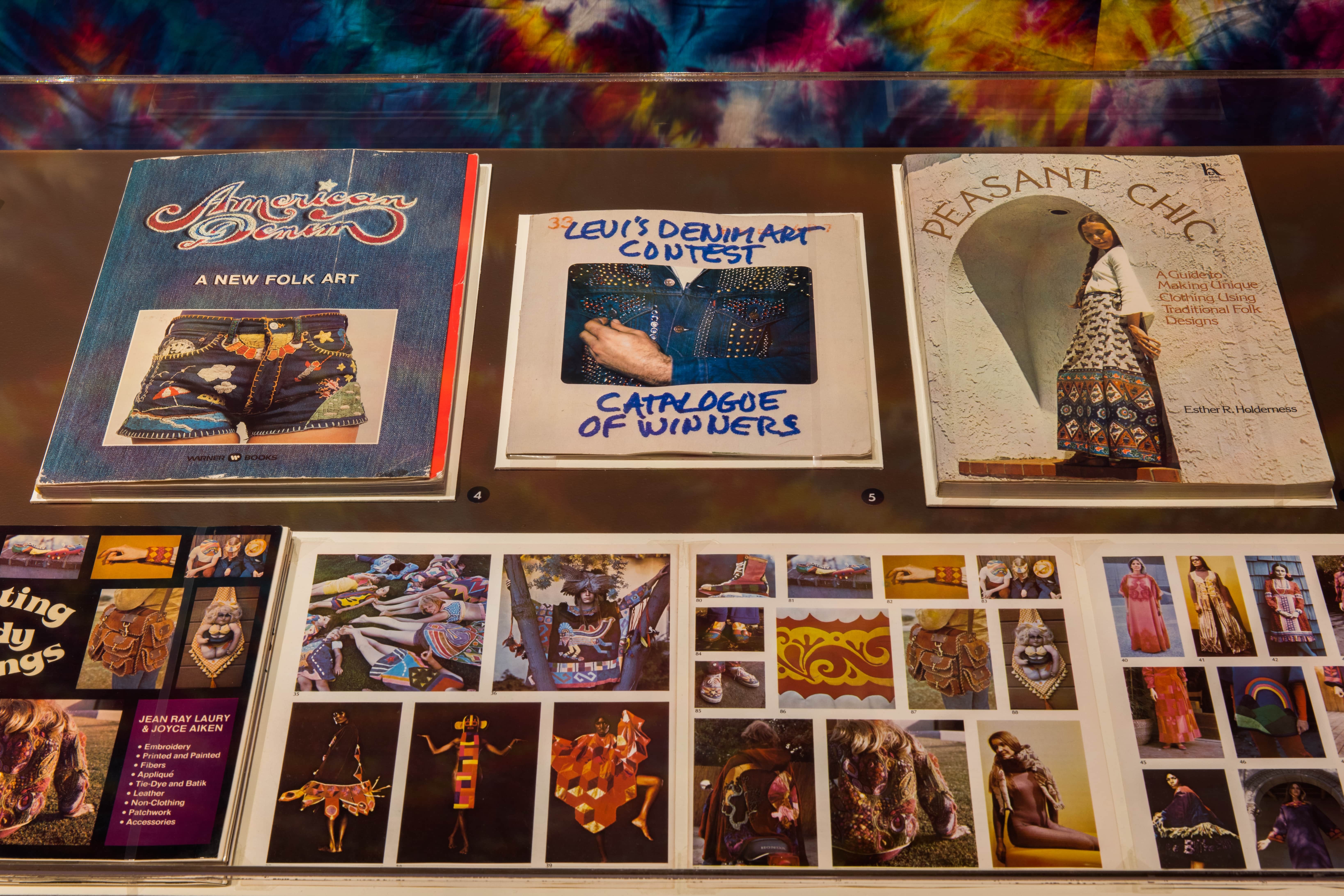 Print Media from the period. Photograph courtesy of Museum of Arts and Design.

An easily overlooked element of the show, but one fundamentally at its core, are the references to print culture of the period. A display case on the fourth floor tucked in by the stairwell entrance displays different fringe and counterculture magazines produced to promote new considerations of fashion. In them, identity is inextricably linked to bodily adornment. Ideas of the counterculture still influence our contemporary society, the emergence and importance of personal identity is one example. This idea of personal branding is taken for granted in today’s hyper-consumerist and over-branded society. But, identity and dress was a critical fulcrum for theoretical discussions, political debate, and used to explore new community practices. The sampling of contributions to the Levi’s Art Denim Contest provides context to how the counterculture could enter the mainstream – modifying Levi’s jeans was a widespread trend. 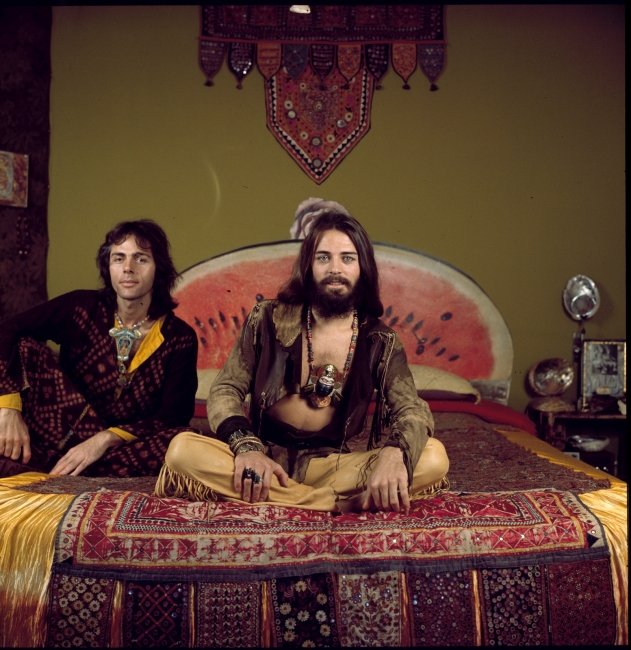 Alex and Lee, 1974. Photographed by Jerry Wainwright for “Native Funk and Flash.”

This exhibition is a resource for people who did not live through the tumult of the 1960s and 1970s to begin to consider why such a vibrant counterculture seeking alternative lifestyles in the United States emerged, and what the products of their emotional and spiritual quests looked like. Many people who did experience this period may remember it fondly as they go from piece to piece recounting their youth. We are living through a moment which may require another Mercusian refusal of the dominant rhetoric. Visitors should consider what counterculture of the 21st century might look like. A resurgent of interest in craft of the handmade (Etsy is a prime example), which this exhibition champions, for millennials and entrepreneurs may just be, in the greatest irony of all, a new solution to job creation in the United States.

“Counter-Couture: Handmade Fashion in an American Counterculture” is on view through August 20th, 2017 at the Museum of Arts and Design in New York.

Guest Contributor, Cultbytes Museum professional, arts advocate, and freelance fundraiser. She has held a position in collections management at the Metropolitan Museum of Art and in Research and Development at the Museum of Modern Art. Wos is pursuing an M.A. at Bard Graduate Center and has aa M.A. in Art History from University of St. Andrews. Her research is focused on textiles. l Linkedin l