Election Editorial: Forms of Resistance to Protect You From Heartbreak 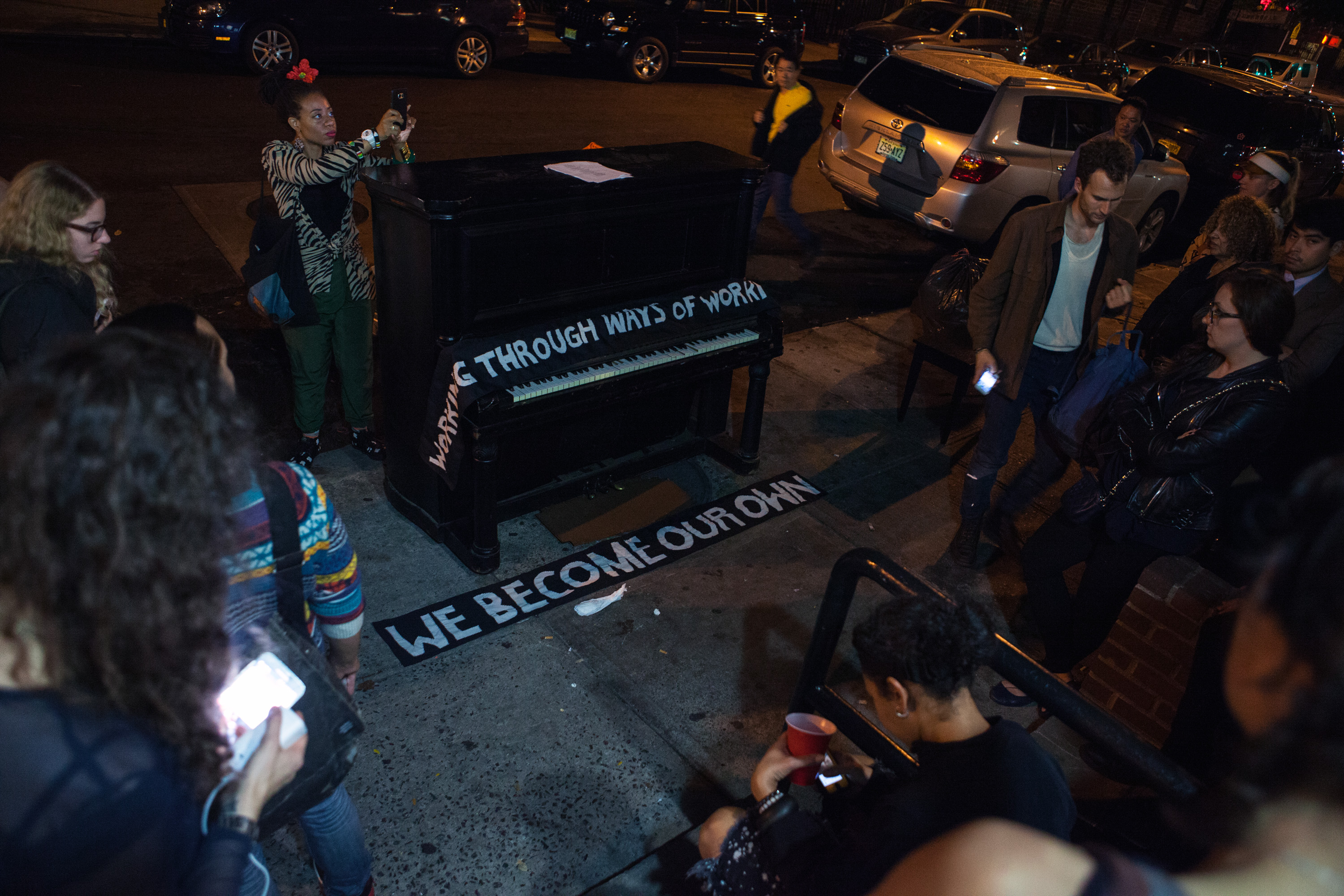 Ambitious, open, and unpredictable, “Your Decolonizing Toolkit” was an evening of performance art co-curated by Ayana Evans and Anna Mikaela Ekstrand. Nine artists, four performances, and a willing audience gathered at MAW on October 21st on the boundaries of Lower East Side and Chinatown. So Low that we heard the screeching subway over the Manhattan Bridge. So East that I did not even spot a Starbucks. While the majority of New York galleries continue entrenched in questionable positions of social relevance, “Your Decolonizing Toolkit” was a refreshing application of contemporary ideas. There wasn’t a single work that did not incite or incur audience participation. Taking on race, sexuality and body politics at a time when such conversations are completely of the moment, the curators created a dynamic context for multiple concerns to investigate each other. 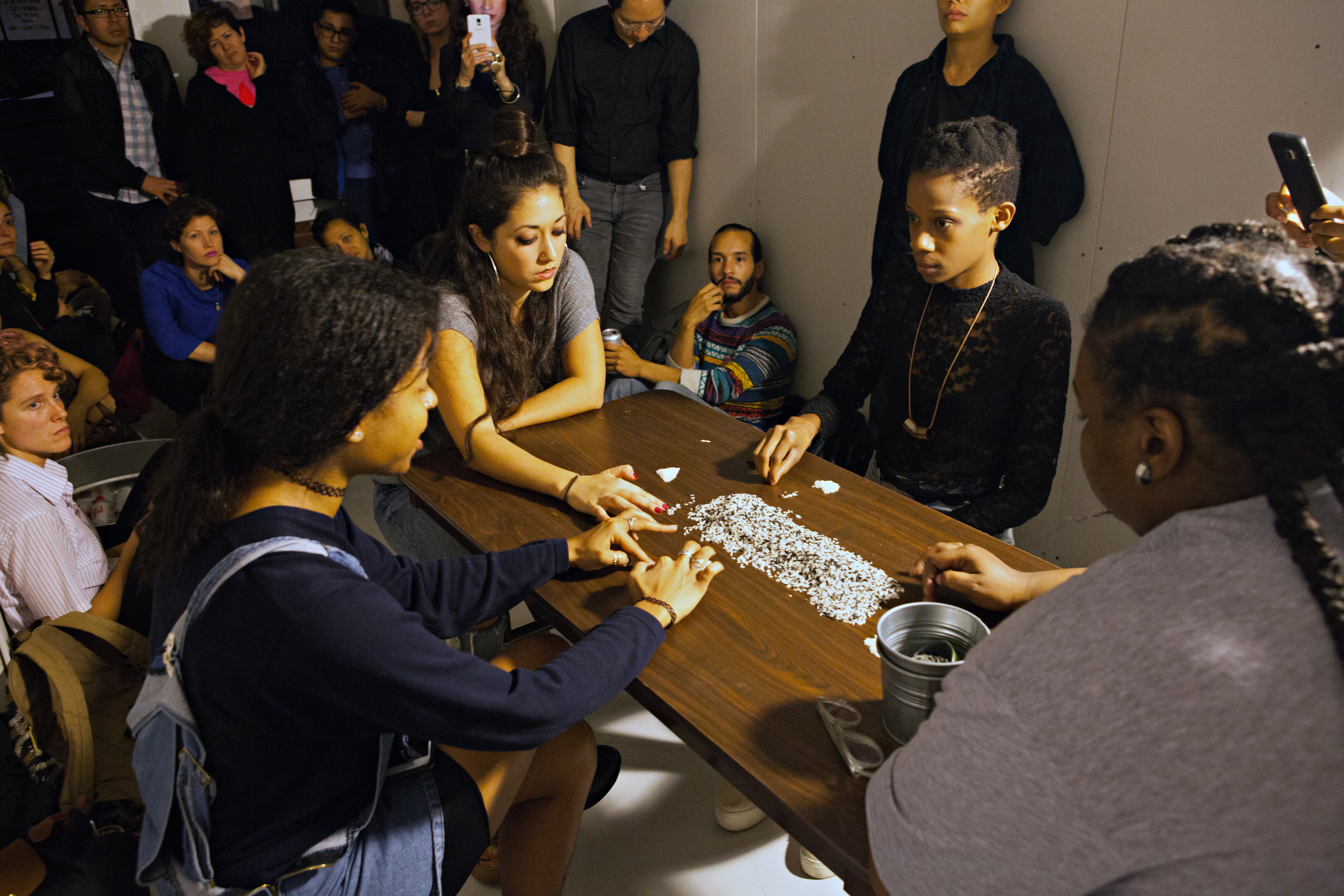 Previous image: Esther Neff, IV Castellanos, and Maria Hupfield “Feet on the Ground.” Above: Dominique Duroseau, “A Rap on Race with Rice.” All images are stills from performances taken by Moch Hahn at MAW October 21st, 2016. All photos courtesy of MAW.

The evening began with Dominique Duroseau’s “A Rap on Race with Rice, “2016, a participatory work consisting of four women of color seated at a square table, sharing insights and experiences. Their fingers quickly hovered over a large pile of mixed rice before separating grains into a light pile and a dark pile. A superficial read of these movements would label this action an act of segregation but that would be a grotesquely inattentive observation. A clear meditation on the art of discernment, the conversation was grounded in intersectional practices of analysis, with rice unceremoniously remixed back into its container at the end. The act of splitting rice with Duroseau is an invitation to break apart racialized structures, from stereotypes of the angry black woman; to surviving all-white spaces; to the everyday indignities that mixed race people endure. Duroseau spoke less and less as the performance progressed, with participants steering dialogue toward directions guided by experience. In response to Duroseau’s question about the relevancy of the angry black woman stereotype, one participant who attended an all-white boarding school spoke about the importance of having a “healthy sense of anger because anger can signify boundaries that keep you safe.” 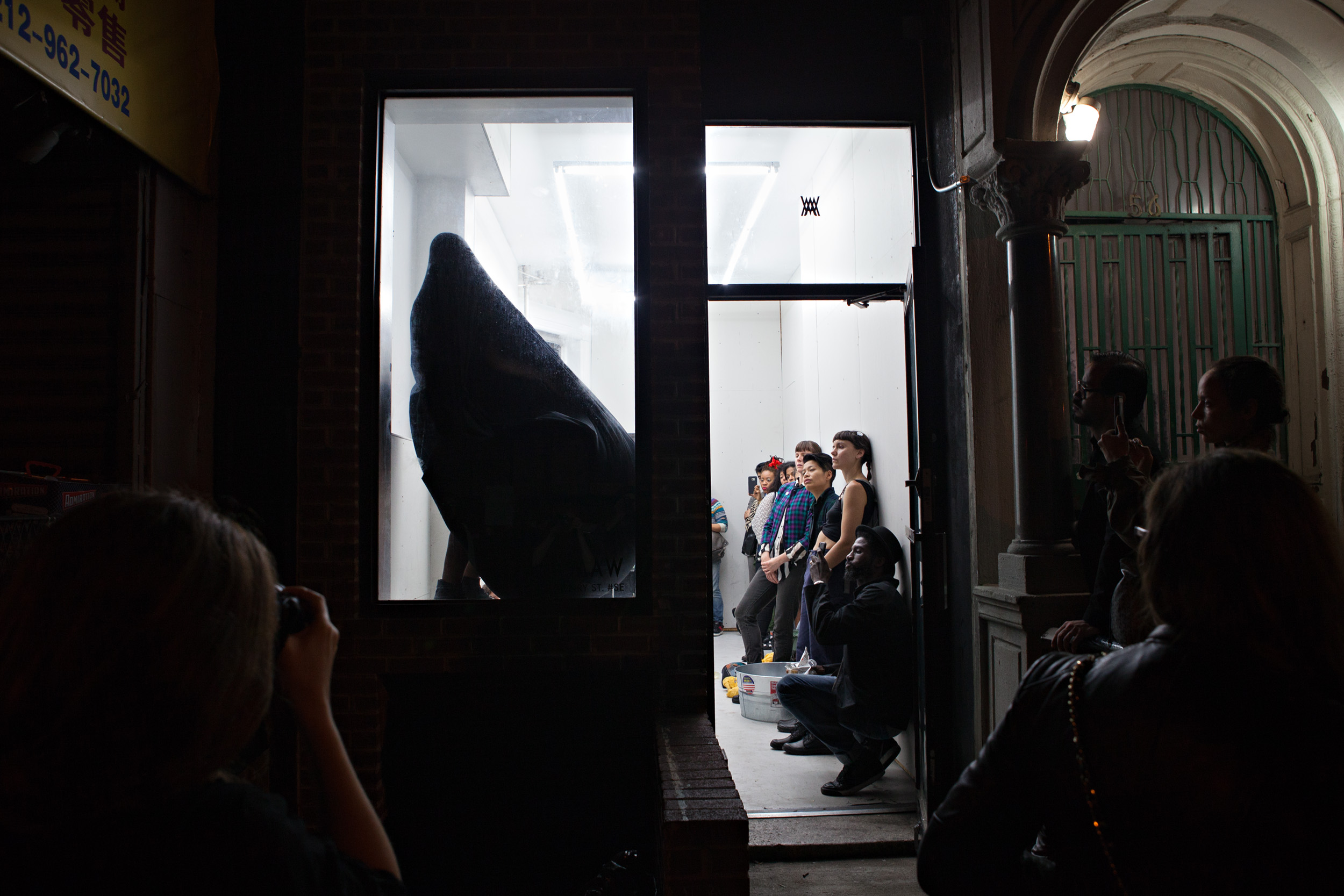 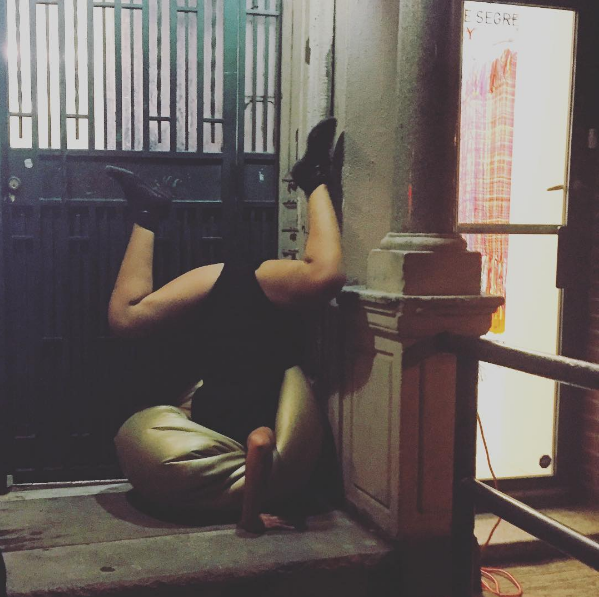 Sculptor Shani Ha and dancer Amélie Gaulier-Brody collaborated on a sculptural dance using black and gold textile masses that are investigations of social boundaries. A response to current social pressures, “Embody,” 2011, was a collaboration designed to bring awareness back to the physical. “Embody” pointed to the sensory apparatus that bodies carry, shifting away from technology’s current grip on our lives. Drawing attention towards the physical to, in the words of the artist, “come back to sensation, to the organs, as a way to remove layers and layers” [of social conditioning], Ha and Gaulier-Brody used architectural frames inside and outside the gallery space to show a temperament of form: the slow shifting of a black textile would be a weight, or become a source of comfort and protection. 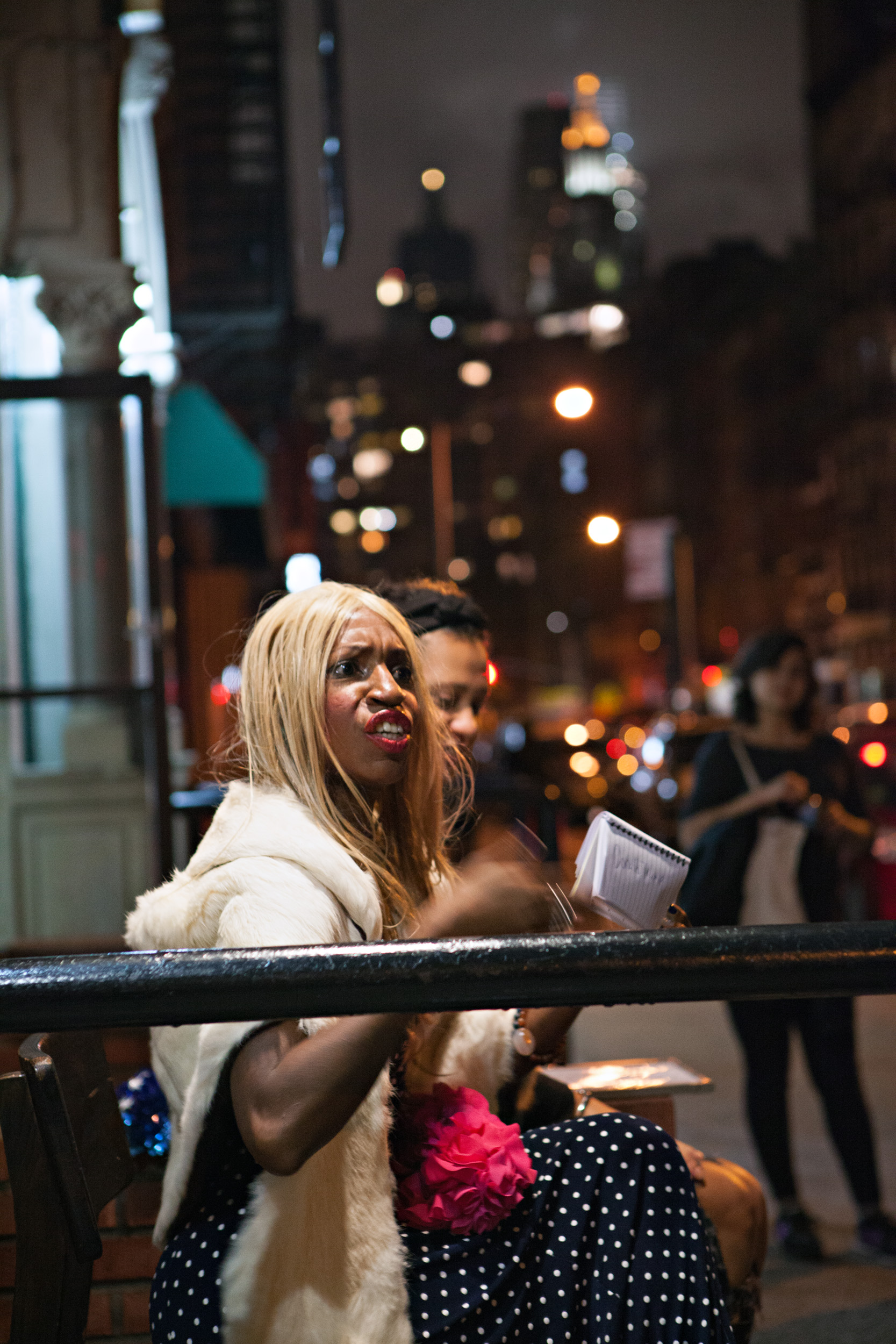 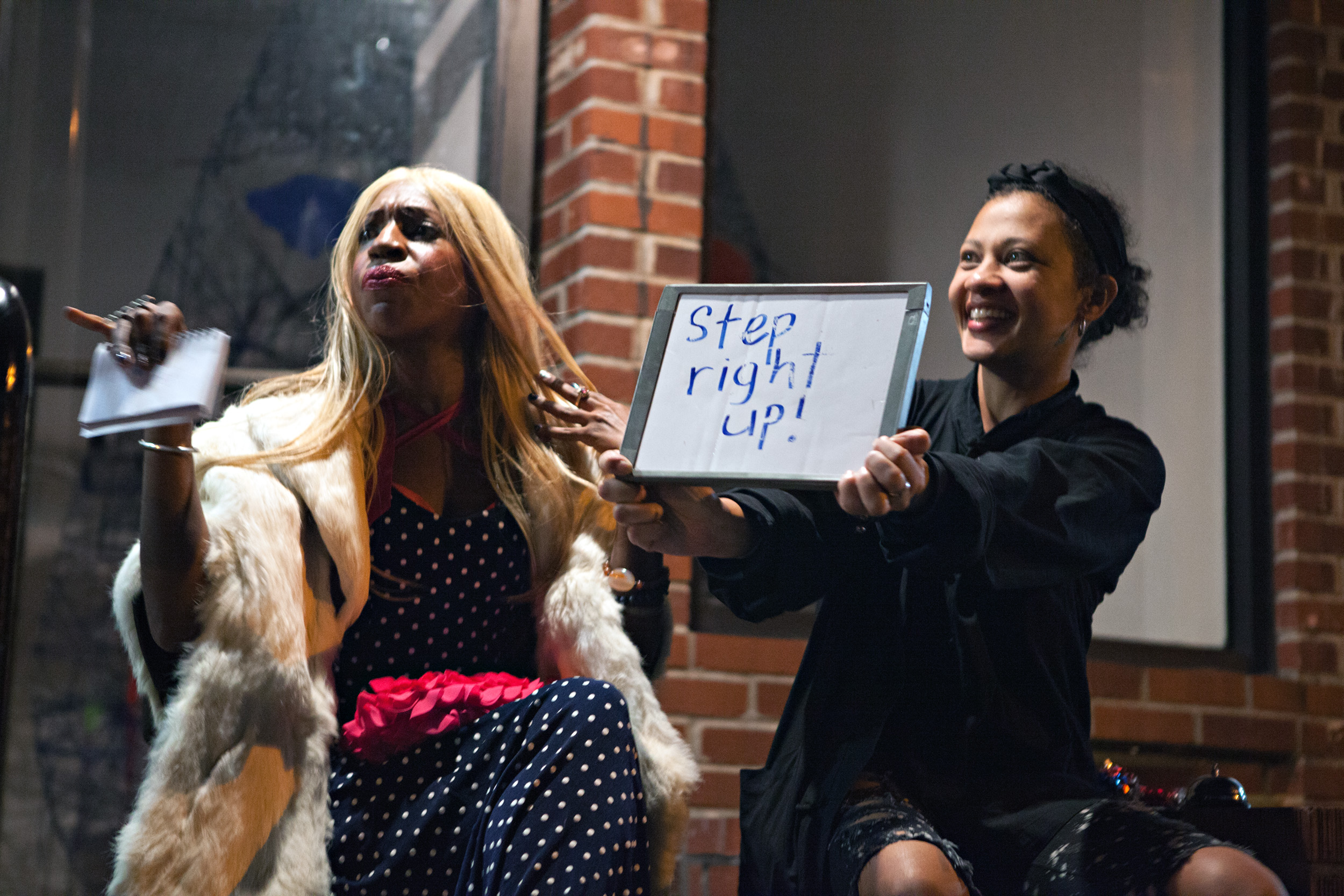 Kanene Holder’s performance as American Justice, the glamorous Trump supporter, raised politically charged events, policies, and persons in a setting where her character acted as a referee in a social match or a game show host in a political sidewalk satire. Titled “Say What So What Now,” 2016, Holder’s highly improvised performance was held on the street with passersby stopping and smiling at an outspoken black skinned and blonde Lady Liberty clad in fur and an evening gown on a contrarian bend. The showmanship quality of American Justice’s dependence on staged optimism, consumer attachment, and determined delusion provided much comic relief as well as a searing analysis of how we face political opposites on an individual level. Holder’s work used comedy to point out an alarming lack of debate and critical faculties in our current political landscape. But it was Justice’s positioning of political incorrectness as the ultimate product placement to a pre-packaged audience of narcissist public intellectuals that kept us laughing at political clowns—and at ourselves—without losing sight of the urgent circumstances governing us now.

David Antonio Cruz performed “The Piano Piece,” 2008 right on the sidewalk, adapting the score to surrounding sounds and interactions. Wailing at the moonlight under the distant screeching of F trains, Cruz stood in front of a vintage upright piano. Once in awhile Cruz would violently play a few keys but it was the live silence between lyrics (“How do I know you feel it?”) that generated the most striking moments in the piece. Walking off into the night when the piece finished, Cruz left the abandoned piano and its audience with a renewed sense of hearing and of feeling the space of urban night itself. 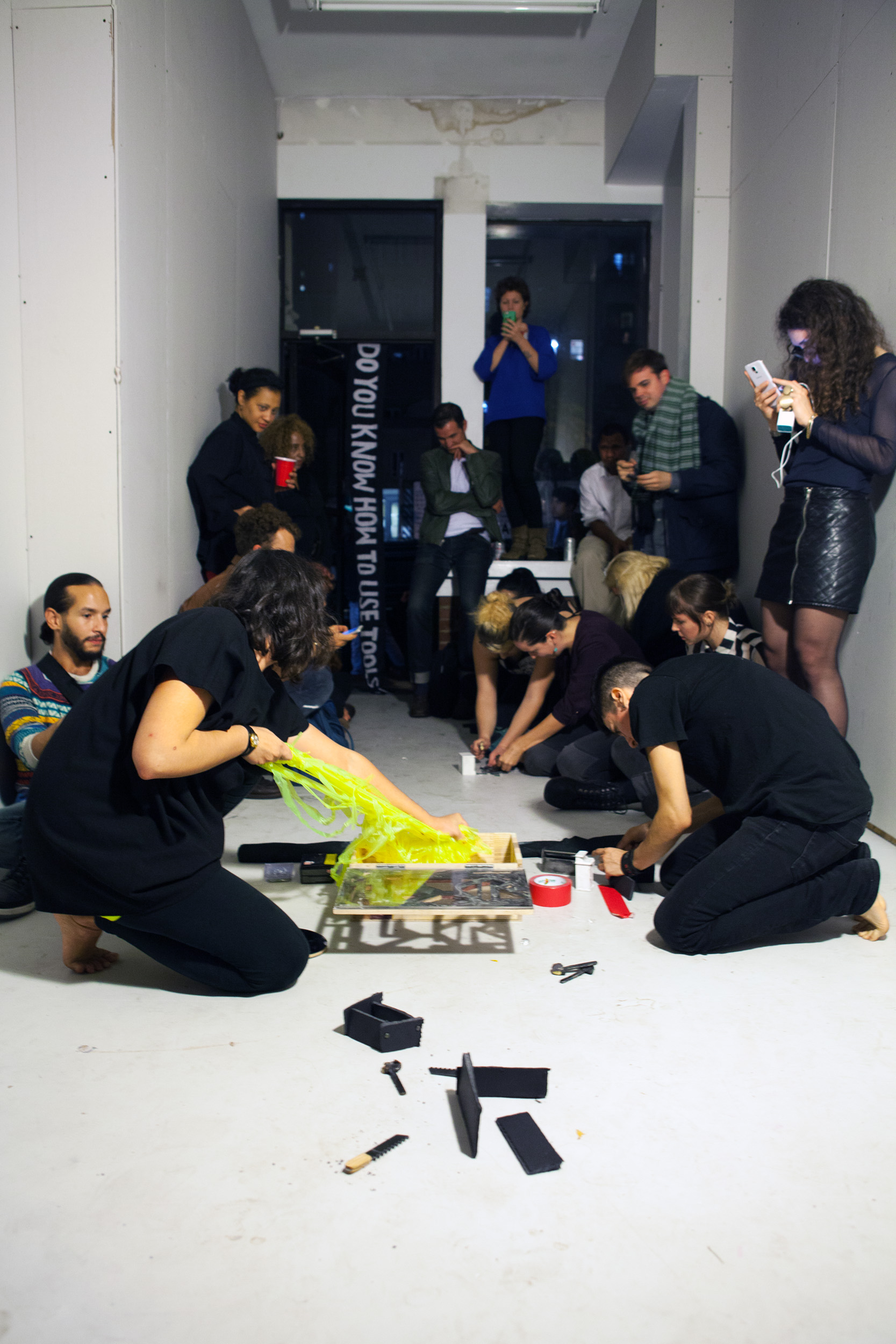 Ending the evening’s lineup was an intricate collaborative performance, “Feet on the Ground,” 2016 by Esther Neff, IV Castellanos, and Maria Hupfield. Gathered around a wooden box on the floor, two performers opened its lid and began using its contents: surveyor tape, rulers, foam core, mirrors, folded survival blankets, sharpies, and a large black banner. At one point, one performer asked someone in the audience: “Do you know how to use tools? Can you help me?” Working silently, the three performers created something like a modest banquet of possibility under a bright green tape that went from the gallery wall and right out the door. A green leafy plant balanced precariously on this green tape, above a black banner with the words “Decolonize” written in white. This performance emphasized the sheer labor not just of art making but the labor it takes to strip away social conditioning, the work it takes to undo the parameters we’re told and taught. As evidenced in another banner (“Working through ways of working…we become our own”), reclaiming our own personhood from forms of colonization takes a sharing of tools, a generosity of knowledge, and a participation that displaces the individual ego in favor of a braver unison.

“Feet on the Ground” is the perfect companion to “A Rap on Race with Rice.” Without the format of open dialogue, arriving at tools for liberation is a waste of effort. “Say What So What Now” highlighted the absurdity that emerges from social structures built on division and conquering. But the act of decolonizing the parameters through which we think, interact, self-identify, and self-build is not a one-off event. What remains unanswered is the next step. One can hope that “Your Decolonizing Toolkit” can function as it would best: as an on-going series making the act of decolonizing as ever-present as the sustained acts of colonization that predatory capitalist societies are, and have been, entirely dependent on.

“We’re not taught to see love as powerful enough.”
—participant in A Rap on Race with Rice

The real test of such intelligent curatorial selections is not a matter of provoking social results but a question of how to sustain the commitment that individual decolonizing acts require. If we can turn to artists to imagine, design, and build better social models, we need curators who  surpass established passive roles. The most powerful aspect of “Feet on the Ground” was in presenting the force of labor itself as integral to reimagining the potential for a toolkit. The power dynamics of labor was also indirectly referenced in Duroseau’s work, as people of color have historically been subjected to doing the “the picking,” i.e. physical labor.  Freeing labor and thought from conditions of exploit, “Your Decolonizing Toolkit” was a riveting sequence of actions that will be difficult to forget. As a one night exhibition, it was not nearly enough. As an on-going series, it is an adaptive platform, a powerful catalyst for the most urgent conversations we need to be having today.

“Your Decolonizing Toolkit” was held at MAW on 56 Henry Street on October 21st, 2016. The performances were streamed on Facebook.