Election Editorial: “I’m Not Giving Up, and Neither Should You.” 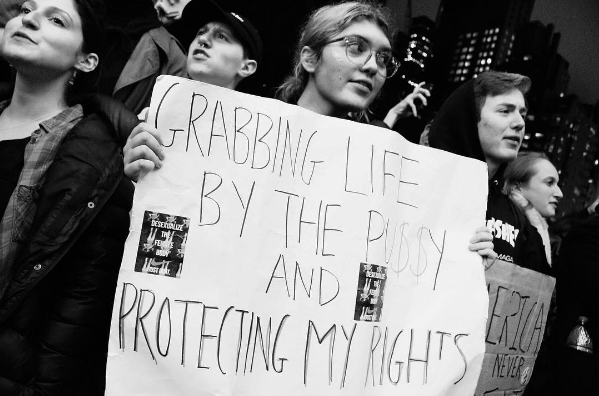 Last night, the real estate mogul and president-elect Donald J. Trump’s various buildings in New York, Chicago, and Washington D.C. were transformed into sites of resistance as people collected to show their discontent with the heartbreaking election results. The eruption of protests was not limited to liberal cities on our coasts but people in St Paul, Minnesota; Richmond, Virginia; Kansas City; Omaha, Nebraska; and Austin, Texas are reported to have taken the streets to demonstrate. International press reflects a state of shock and disbelief; “American Psycho” is printed on the cover of Libération and “What have they done?” headlines the cover of the British tabloid Daily Mirror. Trump winning the election is a concern that cuts across party, state and national boundaries.

Demonstrations have always been a part of my life; as a teen in Stockholm I passionately demonstrated against the war in Iraq, I marched during Occupy Wall Street in New York, and a couple summers ago, while on holiday in France, I happened to run into a crowd marching for Palestine and stayed to show my support. Protests are a tool to raise awareness, to rally support, and sometimes a last resort for the powerless. Simply put they are a call to public action through the plainest form of resistance – a showcase of discontent. As I stood outside of Trump International Hotel and Tower in New York chanting “Pussy Grabs Back,” “Queer Power Fuck Your Tower,” and “Love Trumps Hate” I felt that it was the most melancholy of protests I had been to. Not only due to New Yorkers subdued mental state, rather, because the solution to the problem, and perhaps the problem itself, is not entirely clear.

Essentially Trump is an anti-politician. His demeaning language towards minorities, women, and his opponents go against all forms of political correctness and conduct. By not making his tax return public he also opposes one of the fundamental functions and pillars of our society – taxes. America’s problem is larger than Trump. Why have people lost faith in our political system?

The United States is said to be the world’s largest democracy, but is it a functioning democracy if less than half of the populace do not exercise their democratic rights? It is a scandal that only 56% of those able, a total of 131 million, came out to vote for this election – to give you perspective the United States has a population of 322 million of which 231 million are eligible to vote. Even crazier is that most of those that actually hit the polls voted for Hillary Clinton. Clinton is the fifth presidential candidate to lose the Electoral College but win the popular vote; in 2000, Al Gore was the fourth. In Boston protesters waved signs urging to “Abolish the Electoral College.” Twenty-seven amendments have been made since the constitution was put into place in 1789 and I think it is time for another.

What Role Did and Will the Media Play?

Mainstream media, has had an important part in the election and their role needs to be scrutinized. The media industry is in distress, print is moving online and the number of media outlets has increased while prices users pay for content has plummeted or disappeared entirely. The most valuable asset on the digital market today is your attention. Trump was a great way to grab it. Spurred by Trump, who is a rude media personality, the election campaign coverage spiraled into a flurry of low blows and attention grabbing headlines. Which, in my opinion, gave Trump an unfair advantage in terms of free press and lowered the overall quality of reporting. Instead of critical journalism coverage of the campaign played on emotions – which candidate do you like the most, who said the dumbest things? Days before the election polling research placed Hillary Clinton at a strong lead which turned out to be a complete and utter miscalculation. Media has played a huge role in making this election season affect driven doing detrimental damage to the democratic process. Now, many media outlets are opposed to Trump. What impact will they have on public opinion and his ability to govern?

Women Will Never Give Up

This is where I digress, in terms of political correctness, but what the fuck is wrong with America and our Bernie loving democrats? This election had the potential to make herstory, to show people that, to quote Clinton’s speech to the UN as First Lady in 1995; “human rights are women’s rights, and women’s rights are human rights.” There was a chance to prove that women, like men, in America have the possibility, and right, to run and be elected for the highest office. The first woman in America to run for president, at a time when women didn’t even have the right to vote, was Victoria Woodhull in 1872. 136 years later major cracks have been made in the glass ceiling with Clinton’s groundbreaking and important nomination as the presidential candidate of the Democratic Party. But, unfortunately, the fact that she didn’t quite make it all the way serves as a  reinforcer of the current patriarchal structures. Sanders campaign had a small but important role to play in this. Why is it that it was so difficult to rally the Bernie Sander troupes to support another visionary leader that would cement irreversible progress in a revolution of the people, that of gender equality? Clinton’s corporate ties and her email scandals are petty in comparison to the importance of electing our first female president that, in addition to being a woman, was a strong candidate. Women don’t give up and I for one hope that Clinton might run again, if she doesn’t I think that Elizabeth Warren is a viable candidate.

I didn’t write this article to lay blame but instead as a call for action. A call for us to organize, to take a critical look at what just took place, and also think about the future. What does it mean to have an anti-politician in power? Will America’s people have a larger sense of freedom? With racism and sexism on the rise what does freedom entail? The failure of this election is a decrease in USA’s power on the global arena. The markets that dipped on Wednesday night have started to bounce back, similar to what happened after news of Brexit, but how the dollar will be affected remains to be seen. Trump will most probably undo much of Obama’s progress with universal healthcare insurance and defund other social programs, like Planned Parenthood. We need to deal with all these issues. How will this affect your life and those around you? Can these services be replaced? What new forms of creativity and art will be born out of protest? I hope that the demonstrations, dialogues at universities, and public discussions that are taking place online and across the country continue and that they will transform into productive forms of resistance.

Did you just finish this article? Thank you and good job. Now, before you start resisting, treat yourself to something fun, go see some art.