In our post-colonial world the approach towards understanding African art (artistic production from Africa or by Africans) tends to stem from a western perspective. There are however multiple ways to approach the subject. Kongo: Power and Majesty at The Metropolitan Museum of Art was hugely popular showcasing artistic production in Congo from the first point of European contact in the 15th century through the 20th century. In addition to the fifteen Mangaaka figures on view, missives, ivory oliphants that were sent to the Medici family as diplomatic gifts, and cast pieces with Congo Christian motifs illustrated the shifts of power and influence between Congo and the West. Contrasting this attempt to write a new historical narrative of political interconnection and exchange the exhibition Fétiche, at Upper East Side gallery Venus Over Manhattan, instead unmasks the polar opposite; exoticism. By juxtaposing work by modern and contemporary artists like Alexander Calder, Maurizio Cattelan, Richard Prince, and Andra Ursuta with the historic African works, popular as collectibles, that influenced their artistry the exhibition explores a superficial interest in African material. I was especially struck by one fast and loose but visually striking juxtaposition prominently placed in the exhibition space; It’s All Over (2008) an ink jet print, acrylic and collage by Richard Prince depicting a ritual-like scene featuring, among others, a bound women in the foreground flanked by two Vanuatu grade ritual figures. Signifying both erotic and intercultural fetichism. A third mode is found at 1:54 Contemporary African Art Fair that strives to represent the multiplicity and diversity in African Contemporary art. The fair that is named after the fifty-four countries that form the continent had their inaugural exhibition in New York during Frieze week in 2015. It is safe to say that African Art, both historical and contemporary, is trending on the New York art-scene.

The Armory Show’s Focus section, African Perspectives, like 1:58 highlights artists from Africa and the African diaspora; investigating international artistic production from an African viewpoint. Afro-futurism, the anti-colonial struggle, collective memory, and belief systems are common concepts in Kapwani Kiwanga’s work, the fairs commissioned artist. Kiwanga was born in Canada but is now based in Paris. The Secretary’s Suite, a documentary style single-channel video installation references New York as it is set in a 1960’s United Nations conference room but explores global politics by investigating modes of gift-giving. Ato Malinda’s videos explore the African diaspora and queer aesthetics through narrated video and portraits of herself. Circle Art Gallery, her Nairobi based gallery, exhibited the work in a non-conventional black box enhancing the performativity of the work. Nengi Omuku’s eye-catching paintings at Omenka Gallery, based in Lagos, feature iridescent landscapes and hybrid beings suspended in the picture plane. They are political representations of transformation and an illustration that things are not always as they seem. The Armory’s own catch phrase “from Lagos to London to Luanda” runs true as the section’s fourteen galleries presented art from African artists based around the world.

With international art fairs becoming the major venue for contemporary art sales a drawback is that the work on offer streamlines. As a respite from the high-priced statement pieces that are staples of the globalized market – Candida Höfer, Katharina Grosse, Lucio Fontana, Kehinde Wiley, Yayoi Kusama and many more – the works in African Perspectives, Armory Presents (showing emerging galleries), and other similar initiatives at other fairs are instrumental in showing diversity and the parallel global narratives present in contemporary art production. 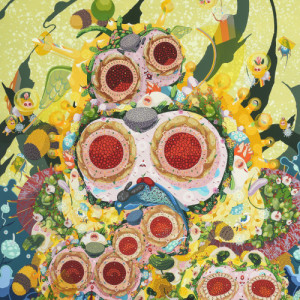