Martinique, an overseas department of France located in the Caribbean, reputable for its rugged coastline and breathtaking nature may at first seem like an unlikely venue for a performance art festival. But, the regions complex colonial history provides a fertile stomping ground for performance-based work driven by identity and cultural politics – as proven by Festival International d’Art Performance (FIAP) featuring eighteen international artists. With the festival, its founders Annabel Guérédrat and her partner Henri Tauliaut, created an interconnection between the Americas, focusing on the vertical axis across the U.S., South America, and Caribbean.

During my stay in Martinique, I caught up with Guérédrat – curator, performance artist, and co-founder of the island’s first performance art festival. 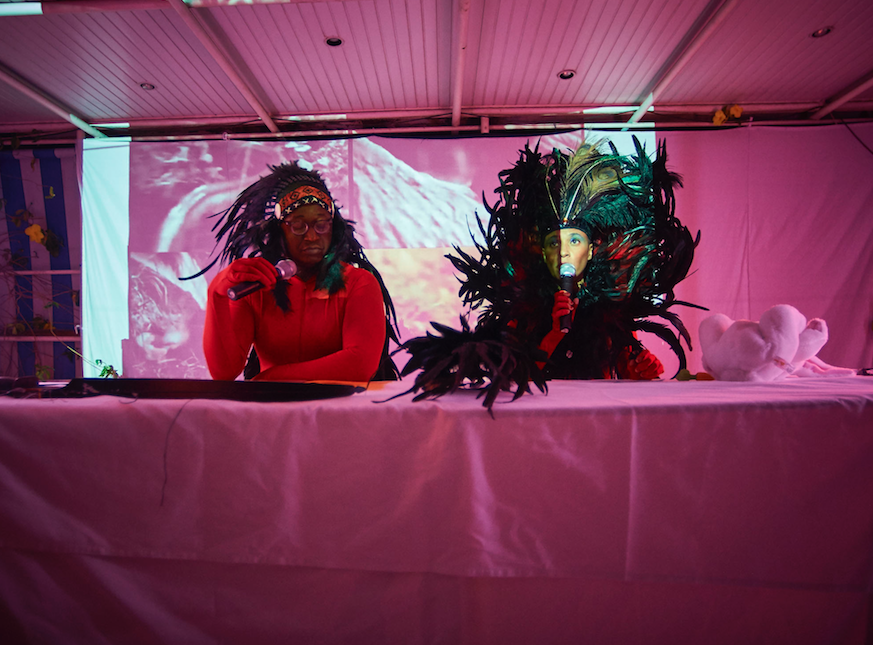 Tsedaye Makonnen: How did  you perform, curate and run a festival all at the same time while making it look so effortless?

Annabel Guérédrat: When I returned to Martinique from Paris, it felt like the right moment to start organizing a festival and I had the support. I anticipated doing this a long time ago so I began the organization about one and a half years ago. Since I am inspired by Black Feminists such as Audre Lorde and Janet Jackson’s Pleasure Principle, I do everything very seriously like it is my mission!

I do not really consider myself a curator, I’m a performer, so perhaps I curated this festival as a performance. Performing the festival rather than curating the festival. While organizing the festival we (Henri and I) were surrounded by really great and supportive people. I am not quiet or anxious, maybe a little nervous that I have to perform and give my all to the audience while curating and taking care of the artists all at once. For me performing is like a conquest, it brings me joy. Sometimes, when I hear artists who are picky and do not want to do certain things. I think, if they went to Haiti or Chad, in a country that has less resources, they would have to perform with what was offered to them. I live and perform with this sense of urgency, always. Really, I do not like to separate curating, performing, and organizing; it’s all the same. 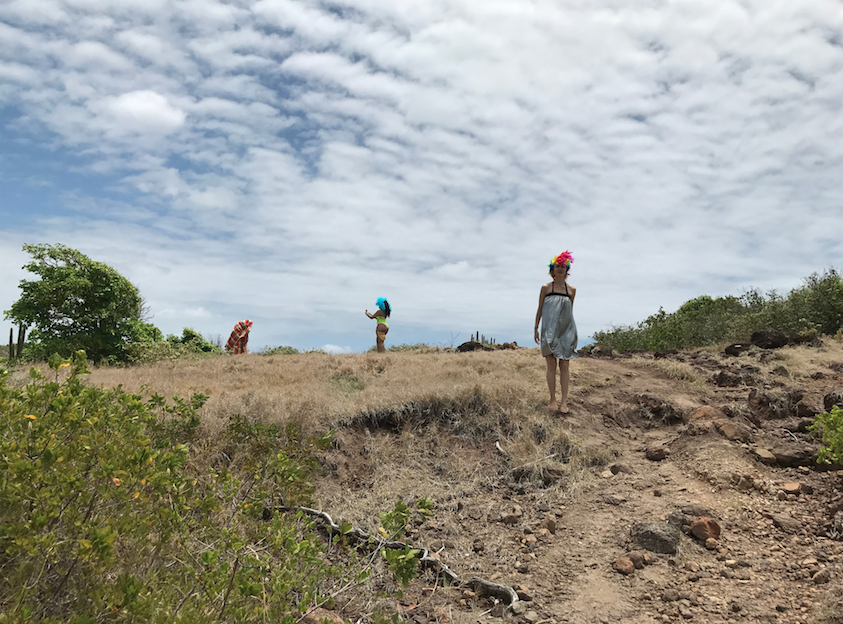 TM: You seem invested in telling our story from an African Diaspora, Caribbean, Afrocentric perspective, the opposite of Eurocentrism.

AG: It is important for me to tell the stories of those that do not come from the imperial country but that of the peripheral point of view of the Caribbean and non-European people.

TM: For me, this is the first time I am involved in a performance festival that focuses on artists that do not engage with the white gaze. A festival that instead is focused on the black and brown, Caribbean perspective, as well as other cultures.

AG: The point is to put the Caribbean on the map, to be visible and no longer invisible. I lived half of my life in France and I was invisible, as a performer, an artist, and a choreographer. For me it was a crisis, I stopped dancing and said to myself I have to do something or else I will die from invisibility. Before I was a dancer, I was a teacher of African History and Literature – this comes through my work. 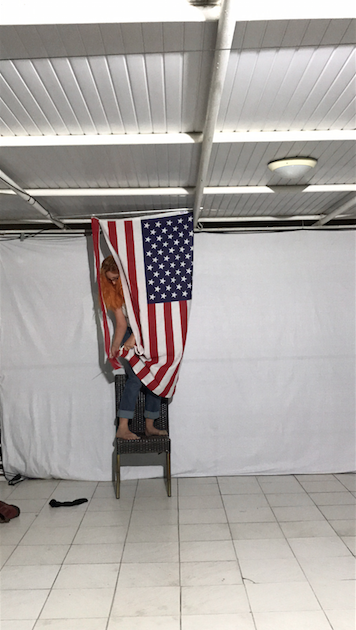 After this crisis, I decided to go to the West Coast in the U.S. to meet Anna Halprin. I studied with her and she gave me the key, the tools to move forward. This was in 2010. Now in 2017, I feel like I received all this energy from a Shaman woman. She gave me the key to continue, the show must go on! In 2013, I came back home to Martinique because I realized I loved my people. I love my Caribbean people and I love the nature here. In Hysteria I say: ‘We need to take care of nature, to take care of space, to take care of oneself, it’s inextricably linked to taking care of history, the history of our people written by our people.’

TM: Why performance art? You have all these other skills, or are you all of these things and not just a performer?

AG: After the day of FIAP talks I was so confused at the end and thought: perhaps I am not a performer? I do not want to be categorized. I come from dance. I love to use my voice and body. As a child I felt my mouth was paralyzed. I could not cry or complain to my mother. When I went to Anna Halprin she helped me use my voice. Using the voice  is empowering. Here in nature we have La Mangrove where the slaves went to escape from the sugar plantations, so it is between the sea and river: Yemanya and Oshun. After the slaves crossed the river they could run away, as the dogs could not pick up their scent. So La Mangrove is very powerful here. It is a rhythmic way to create. I got to where I am today in a La Mangrove way, in a kind of resistance way. 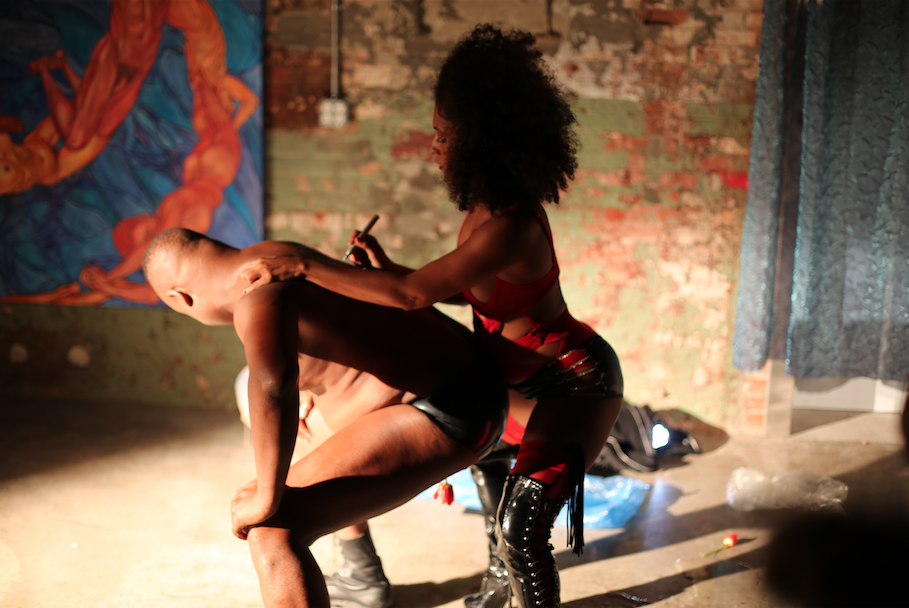 TM: You and Henri, you collaborate as performance artists, curators, festival organizers, and as partners. How does that work?

AG: I have my freedom, sometimes I perform separately from Henri. If we did not have that I would go crazy. I have to create distance but, that can create jealousy. We are always questioning talking about this. Since I am obsessive and focused on my work, it can come off like I am not focused on our relationship. If he is upset, I am like: ‘C’mon we have to preserve our relationship and figure out ways to make it work.’

Anna Halprin, she was married to an architect (Lawrence Halprin) and they worked together for a long time. She said that it came from a life art process. Life and performance art feed each other, the boundaries are blurry. They are one of the same. Being in a relationship with Henri is a form of empowerment too because I am not alone. He has his art friends, I have mine and when we come to together we are this collective body. I think it is great. This is a very small island, we have to create collaborations.

AG: It’s an alternative practice. I record sound lessons and sing into my phone to train my voice. I get massaged regularly to take care of myself. I practice yoga, meditation, body/mind centering, silence, and deep breathing. Sometimes I don’t have the discipline to do it everyday because I need other people to join me. Also, the town’s council gave me a studio space to use 3 days a week.

TM: Your parents were present for the festival the entire time, do they have a background in art?

AG: My mother is an Ikebena master, a Japanese art form of flower arranging, it’s so boring, you have to do it very slowly (laughing). Both my mother and father came from scientific backgrounds, so they are not artists. There are many tensions between my mom and I because she is so persistent. It’s like Louise Bourgeois’ relationship with her mother. When my parents die, perhaps I will try to look for them in the audience and say ‘where are my parents’ because they have been so present. For FIAP, I think through their presence they are making a statement to the community of Martinique that they are here to support their daughter. They are telling Martinique “we’re showing up and you better too.”

TM: Your dad is there with his camera taking pictures of everything and your mom is there greeting everyone like she is the curator. Every time she saw me she greeted me as if I was her daughter. They are so present it is amazing. Throughout the festival it felt like they were a part of it.

AG: Meanwhile, I heard them yelling out ‘ey I can’t see my daughter!’ and I’m just thinking in my head ‘oh I’m going to kill you’ (laughing). They inspire me a lot because she’s crazy and my dad is obsessive and authoritative. This is why I’m so rebellious, why I want to be a witch, because I receive so much energy from both that I have to assume a shamanic role. I met many shamans in the last couple years, to be in a shamanic process, to learn that we’ve got the power too. My parents are very powerful, they have very strong personalities. I will have power derived from my parents but also my own power derived from spirituality and connection with nature.

Perhaps one day I will put them in my performance. It would become a gimmick. The audience would ask me: “But why are your parents always there when you perform?” I answer: “I don’t know.” 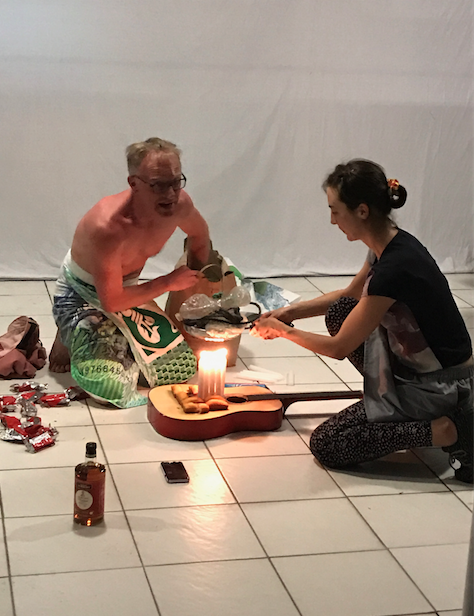 TM: Everyone was so impressed with all the programming that was packed into less than a week. When will you and Henri do this festival again?

AG: The next festival will be in two years and probably remain bi-annually. This first one was very particular because we knew each artists’ work very well. We have been watching their careers and have been present when they perform. We traveled to meet them, we knew them personally, and we like them as a human being. It’s like a family. For the next edition, Henri and I will need to continue to travel and meet performers so that we can invite them. I want to personally know the artist because it makes the festival less imperialist and more of a familial collective.

Towards the end of our conversation Annabel expressed that it was surreal we were all leaving so soon and shared that it was such a gift to have all of us come to their island.

Writer, Cultbytes Ethiopian-American interdisciplinary artist with an emphasis in performance and installation art that implicate the audience. Other titles she bears that also inform her art practice are mother, educator, and birthworker. Recurring themes present in Makonnen's work are identity, migration, colorism, womanhood, ritual, and kinship. In the last few years her work has centered around creative responses to the forced migratory patterns inflicted on the African Diaspora. l igram l twitter l

Can You See the Difference Between Rorschach and Gobolink? Natale Adgnot’s Show Puts You to the Test