It’s difficult to pin down in language the little spark of authenticity on view at Claire Oliver Gallery in Harlem. The four-story brownstone on Adam Clayton Powell Jr. Boulevard is currently home to ‘Love Letters for Harlem,’ a group show that collects works from four local Harlem-based photographers.

Authenticity claims more substance than its many relatives. Authenticity is beauty backed by action. The photos here from Shawn Walker and Jeffrey Henson Scales and John Pindherhughes and Ruben Natal-San Miguel were all taken in Harlem. Each artist’s analogous eye finds unity in a shared love for their subjects—places and people and objects—which creates a well-rounded conversation celebrating this storied neighborhood. ‘Love Letters for Harlem’ is an ode to home amongst a tumultuous year.

Jeffrey Henson Scales offers images taken at House’s Barber Shop, a Harlem stronghold since the post-WWII era, between 1986 and 1992. The independent photographer and New York Times editor moved to Harlem from Hollywood with his wife and daughter 35 years ago.

“I’ve generally made most of my personal images of those things that are part of my day-to-day life,” he wrote to me. “I merely documented the place as it was in the later part of the 20th Century. Barber Shops will remain a fixture in the community for as long as hair continues to grow. I just hope viewers can come to these photographs and get a sense of place and the personality of the Harlem community that existed in the time and place these images were made.”

Ruben Natal-San Miguel preserves a more modern Harlem with five spontaneous portraits taken on the streets between 2011 and 2020. “My documentation of Harlem and NYC spans almost two decades of solid work post- 9/11, when the street culture of NYC was being ‘phased out’ by heavy and aggressive gentrification through the five boroughs” Natal-San Miguel wrote over email. “A lot of my subjects are from highly marginalized areas of the city so the type of imagery documented by me tends to be pretty unique and pretty genuine.” Today, his efforts are collected by institutions including The Studio Museum in Harlem and the Bronx Museum of the Arts.

John Pinderhughes contributes ‘Pretty For A Black Girl,’ his 1998 series “which features an aspiring model and friend who was heartbroken at being told that she was pretty for a black girl.’” A father of two daughters, Pinderhughes was deeply moved by her experience and shot the series exploring Black beauty, self-reflection and the injury of racism. Shawn Walker completes the mix with his 2012 series ‘Misterioso / Painting With Light,’ abstract photography seeking spirit through mundane malfunctions in the city’s physical infrastructure. Walker is a founding member of the prestigious Kamoinge Workshop, where Pinderhughes also became a member.

When authenticity serves the locus, little harmonies arise. ‘Love Letters for Harlem’ arranges this acclaimed array of talent spanning time and styles in tandem with ‘Working Together: The Photographers of the Kamoinge Workshop,’ now on view at The Whitney through March 28th. The Whitney presents plenty of photos but also a wealth of artifacts, all synchronized not only to the story of this organization but the greater human struggles it works within. Photography, a record of reality with a margin of error painting could only aspire to, proves a valuable medium for advancing these efforts. Photographers communicate everything directly—joy, absorption, rapture, boredom.

“Looking inward, it can allow us to see ourselves through other people’s eyes,” Scales remarked of the medium. “Outwardly, it can clearly show us the lives and conditions of our fellow citizens.”

Like Scales, Natal-San Miguel began taking photographs in Harlem as his most immediate environment. “I saw the street culture and habits disappearing so aggressively by the condo redevelopment, gentrification, and displacement culture, that I wanted to have those images for myself,” he explained. “Once I realized the social responsibility of this documentation, I decided to take the project to the other five boroughs of NYC and other cities like Philadelphia, Chicago, Upstate NY, Boston, Provincetown and more.”

Scales noted that the Art Historical Canon™️ does exult some excellent work, but “has been also highly flawed and historically exclusionary of non-white imagery.” Images matter. “So many or our lives are now filled with images of every passing moment and selfies that we hope will reinforce our individual and collective sense of self-worth or define our imagined identities,” he continued. “I don’t know, however, that billions of image bytes on computers, social media and cell phones can actually achieve a fully accurate, or nuanced representation of, ‘that which is us.’”

In understanding this, Scales harbors an affinity for the same substance backing authenticity. “I have always been enamored with the gelatin silver technology of black & white analogue photographic prints,” he wrote. “They have a particular luminosity and depth that I find uniquely suited to the presentation of photographic explorations of the  world around us.” He imagines the emotional effect of this authenticity will sustain analog methods within the craft for generations to come.

‘Love Letters for Harlem’ is, itself, scaffolded upon the best kind of authentic effort—direct, community-based action. A portion of the proceeds from editions sold during this exhibition will benefit the local Harlem Community Relief Fund.

“We are all in love with Harlem,” Scales concluded. “I’m very proud to be showing with every one of these artists, as well as showing in such a nice and supportive gallery environment that the Claire Oliver Gallery has created here in Harlem.” Natal-San Miguel also espoused his pride, adding that the exhibition “is not only celebratory and thoughtful but also enriches the culture of the community by displaying the photography made here and showcasing the range, diversity, sense of community and its true genuine love of every single photographer in this exhibition.”

‘Love Letters for Harlem’ is on view at Claire Oliver Gallery through April 3rd, 2021. 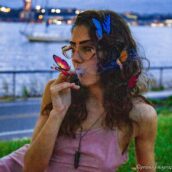 Writer, Cultbytes Vittoria Benzine is an art journalist, essayist, and editor based in Brooklyn, New York. Her affinity for counterculture and questioning has introduced her to exceptional artists and morally ambiguous characters alike. She values writing as a method of processing the world’s complexity. You can find Vittoria's writing published by UP Magazine, The Smart Set, Street Art United States, and more. l website l