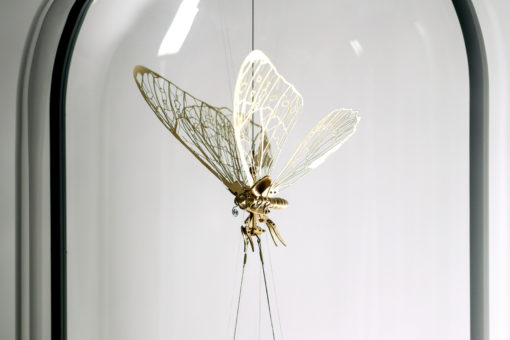 The Salon Art + Design fair is one of the newer additions to the New York art fair roster, and considered to be the most high-end. Held at the Park Avenue Armory, the show brings together fifty six international galleries, mostly from Europe, and features a mix of high end furniture, decorative, and fine arts. The Armory is one of the more versatile spaces in the city, capable of hosting fairs like the Winter Antiques Fair, major installations like those by Taryn Simon and Julian Rosefeldt, and fashion shows like the Fenty x Puma SS18 fashion show this past year.

The crowd attending the opening of the show was as eclectic as the venue’s programming: an interesting mix of antique dealers, Park Avenue matrons, a few recognizable editors, chic foreigners, gallery girls, and a slightly hipper crowd of young artists and designers. And, this is how I like it best: buzzy and alive with a sense of occasion. Except, I forgot that unless you have X-ray vision that allows you to cut straight through the crowds, it’s virtually impossible to enjoy art at an opening. There is an urgency to see everything quickly, to experience everything like a kid at… well, a fairground.

The things that caught my eye during the opening were not necessarily the contemporary showstoppers of the event. But, rather I found myself drawn to the throwbacks to my college Art History classes: the antiquities from Ariadne gallery–a breathtaking collection of Greco-Roman artifacts–and a number of Schiele drawings from Richard Nagy. In the midst of a sensory overload where everything is a ‘greatest hit’ vying for your attention, running into something you recognize feels like bumping into an old acquaintance and then glomming on to them. 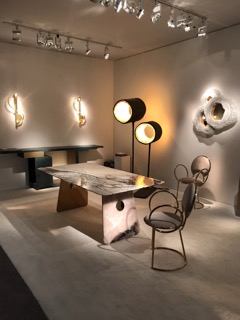 Sunday was different. It was three days into a four day fair, early evening, just as things were quieting down. This is a good time to visit a fair; the nervous energy has worn off, everyone is more relaxed, and if anything counting down the minutes until they can close up shop and convene over dinner. The major collectors have already come to do their shopping, and while people are always happy to answer questions, generally speaking, as a visitor you are left to your own devises.

When you gather a bunch of art, most of it from roughly the same era (in this case, contemporary), certain themes start to emerge. Maybe that’s just a fancier word, for ‘trends’, who knows. But in any case, similarities popped up, and the fiber of the thread I was following from booth to booth was one that interwove nature and artifice. A revolutionary concept, I know— don’t roll your eyes just yet. Many of the pieces took unusual natural materials and manipulated them into something that was either highly structural and architectural in form, or perhaps more radically, hyper-natural, appearing like a shape imported from the distorted landscape of a fever dream. 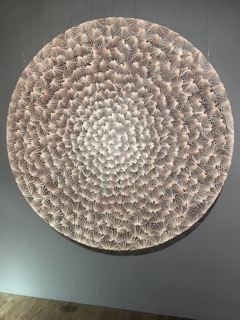 My favorites were “Asabikeshiinh IV (Dreamcatcher IV)” by Rowan Marsh (Gallery Fumi), a wall-mounted disc of sliced turritella shells sealed together to form a bone-colored, filigree screen. The shells for patterns form architectural patterns so symmetrical, that the modern viewer is inclined to assume they were generated with a 3-d printer, rather than cut and assembled from natural materials. Similarly, “Plumage Cabinet” by Hervé Langlais uses inlayed pieces ebony to create an otherworldly ‘feather’ motif that appears almost screen printed. “Sea Anemone 13,” a wall-mounted mirror by Pia Maria Radar (Galerie Negropante) uses lacquered beech rods to recreate the form of sea creatures. From a distance, it looked like something that has washed up on the shore; closer inspection reveals the structural quality of the work. These pieces, were exceptionally beautiful, and technically exquisite. The use of natural materials provided that sense that the artisan behind the work is secondary to the material. 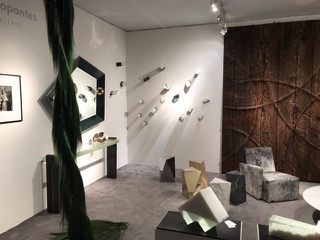 The object I was most drawn to,”Pendulum” by artist Dominic Harris at Priveekollektie in the Netherlands, was not in any way natural, but digital. The piece featured a glass bell jar, but inside rather than taxidermy, was a hologram projection of butterflies fluttering around a gold stand. The image is arresting—a contemporary play on an old-fashioned motif, not only does it represent an impressive technological feat, but the butterflies themselves are mesmerizing, life-like but also hypnotic. As both a symbol and object, the bell jar represents an area outside of time, effective in offsetting the natural process of decay. It’s a vacuum, and to see something ‘alive’ within it is unnerving. And yet here are butterflies that will never die, but will never migrate with the seasons either, fluttering indefinitely as long as there is an electrical outlet to power them. This controlled semi-technological life form is a beautiful, frightening, and perhaps also exciting idea.

Today, we live in a world where technology has advanced so far that we can mimic nature in a way that is basically convincing. For instance, we can grow flowers out of season and even go so far as to engineer beef that was never a cow. Yet, we crave access to the natural world like a vitamin deficiency. Unfortunately, we are damaging it in the process. It is almost as though we were allotted a budget from planet earth and chose to spend it on flying in avocados from Mexico, but had to skimp on fall foliage and consistently cool weather. We all know by now that our relationship with the environment is abusive, as our desire to have constant global access to nature and its resources is exactly what’s destroying it. 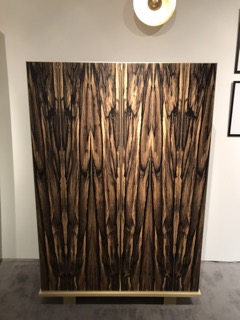 Decorative arts form the props in our designed environment, we use furniture, textiles, and decorative objects to create the set of our ideal world. So if there is a current trend toward natural motifs and forms, in creating designs that are in some ways either imitating nature or even elaborating on it, are we reacting nostalgically against industrial, mechanical forms? (With this in mind, I cannot help but jump to the Talking Heads song “Nothing But Flowers”, which presents the idea of returning to a formerly industrial society ultimately subsumed by nature, the concrete left untended and overgrown with vegetation.) Or, alternatively, is the current fascination with nature actually an almost humanist endeavor to improve upon nature’s prototypes?

Bearing in mind this second idea, I think back to a conversation I had with an acquaintance who works in tech. He once told me, very excitedly, that we could someday reach a society where everything is a virtual reality, where we could live a pain-free existence where everything is within our control. This was the most horrific thing I could imagine, a world where everyone is tiring their eyes watching digital displays, slowly atrophying and forgetting the sensation of human contact. But, then I fractured designers into the equation.

Not only programmers would become living Gods capable of dictating our experience, so would designers and the two groups would collaborate. There was something strangely inspiring about this idea, that thanks to technology, both mechanical and digital, our creative capabilities could operate in a seemingly limitless invented arena, filled with virtual objects, that we continue to perpetuate.

Ceramics at The Art + Design Salon