I became aware of Katya Grokhovsky’s wide-ranging, multi-disciplinary practice five years ago. We have similar cultural backgrounds, tracing back to our childhood in the Soviet Union, our Jewish-Ukrainian heritage and our shared experience of immigration. Grokhovsky works expansively across media, including sculpture, photography, video, painting, performance and installation. I am especially interested in the artist’s uncanny ability to incorporate almost anything into her work, which is constantly transforming. Amongst her material arsenal are fabric, plaster, toys, neon, sound and found objects, to name just a few. This material cacophony helps the artist weave together narratives that mirror her personal history with a political awareness of the present moment. Many of her works deal with and employ aspects of political protest, resistance and refusal. We spoke about her material choices, time and narrative, the occult and the transcendent, as well as her performance at the site of Point A: Chapter One Grokhovsky’s solo exhibition at Ortega y Gasset Projects

Leeza Meksin: The title of your show Point A: Chapter One, seems to reference literary genres as well as mapping and travel. Is it an allusion to your family’s first immigration? Would the next installment be Point B: Chapter Two, or how would the numbering flow?

Katya Grokhovsky: Point A refers to my origins and indicates a start of a journey, a place of birth and childhood and explores displacement narratives of my family. I am interested in multi-year projects, ongoing investigations which can unfold like a book, a record of experiences and reflections, inviting the audience to join me on a quest, a mapping of migrant’s identity, which seemingly has no finale. Point A is a looping, never ending cycle of false starts. It has no Point B, as migration to me is a state of becoming. Every iteration of the work continues as chapters: chapter one, two, three, etc. I migrated twice, once with my family from Ukraine to Australia, and then on my own to the U.S. I had to rebuild, adapt, and adjust during most of my adulthood and now, I am in search of my ever-elusive authentic self, amidst layers of assimilation.

LM: A never ending cycle of false starts is a somewhat mystical way to describe immigration (and maybe the human condition in general). I’m interested in how the state of becoming that loops without finale contradicts the common notion of time as a linear vector. Do you think about your work and life in mystical terms? The Tarot’s Major Arcana card, The Fool, with zero (circle, cycle) as its assigned number and the implication of a cyclical journey of discovery, comes to mind. Are you interested in the occult?

KG: I have always felt like a tiny particle floating inside a large cosmic consciousness soup. I am an atheist, but I am interested in the notion of spiritual energy and mystical forces beyond the self and current existence. I practice witchcraft from time to time and believe in numerology. As someone who had to adapt to extreme and significant life changes early in life, I have always sought and felt support of an ancient nonlinear otherworld. As an artist, I am especially sensitive to vibrational shifts of the universal and I try to channel it as much as I can through my work, merging the past, present, and future into one united primordial system.

LM: That’s very interesting. How do you channel the universal and merge the past, present and future in your work? What helps you to enter this state?

KG: In pragmatic terms, I recycle my past work consistently, connecting the dots of time by reinventing outer expressions of my own self as an ongoing cyclical process, tapping into the past, whilst performing a transformation in the present, with a view towards the future. Metaphorically, I tend to enter a timeless void, where I become a vessel and where legacy of diseased artists, family members, and fellow humans float around and thorough me. All I need is to be alone, isolated and in full concentration to make my work.

LM: The works in the show imply suspension of play or permission to play. An empty, deconstructed stage. A glittering backdrop. A huge, deflated beach ball, wedged between slices of MDF, like a remnant of a circus performance. Different color walls and a large video projection showing a performance, a game of sorts. Can you talk about the staging of the different media and how you seek to activate the gallery space?

KG: I am interested in the absence/presence of the human element in inanimate objects and how it can ignite the viewer’s imagination. Each work, material and color are carefully considered and selected to relate to another and to alter the space in a particular way. A construction resembling a carcass of a playground apparatus, a carousel, or a stage calls for participation, and interaction, yet suspends these expectations in midair, settling instead as an untouched art object. A deflated beach ball, abandoned, shoved, recalls former glory, a story, a distant memory. There are moments of childhood, of playful activities, juxtaposed with captured fragments in painting, such as flowers in a field where I ran as a child, now stained in blood of war, glittering gold of the sun, wheat, and corn, now charred. I propose a layering effect of mediums and force them to coexist, echoing each other in color, material, and form.

LM: The video has a foggy feel with a flattened landscape behind the players, who wear what seems like deflated balls, or painted beehives on their heads. Their movements seem slow and unfocused like a paused video game. Did you want to reference a metaverse, or virtual space while shooting actual people in a landscape?

KG: The fog was a happy accident, and it created a fantastical, no-shadows space, an otherworldly state, akin to a digital environment. The players are my parents, filmed recently during my visit to Melbourne, Australia, where they live. They are wearing hand crafted oversized sculpture-helmets, which isolate their vision and inhibit their movements, allowing for unfocused, slow and “seeking” gestures, as they play a simple game of ball. The video is a metaphor of isolation and dissonance of immigrant experience, of people living in peaceful retirement in Australia, as the war in their native Ukraine unfolds.

LM: There’s a color and material alchemy in your work. The two pastel violet colors on the walls seem to contradict the primary color arrangements in the stage with the squashed beach ball. Similarly, the glitter in the paintings seems at odds with the somewhat brutalist plywood stage. How do you make choices about your materials and colors? What do you want them to conjure for the viewer?

KG: I am inspired by a challenge. How can disparate materials live together, squish together, and co-inhabit on the same planet? Sequins and MDF, lavender and red, primary and secondary. There is an element of absurd contrast and seemingly impossible combinations, which reflect how my life has generally unfolded. A sequence of misunderstandings, from language to cultural identity to ongoing deconditioning. Growing up amidst brutalist Soviet blocks of apartments, desiring imagined “glitter and glamor” of the West, yearning for bright plastic and shiny objects, seen on TV and for sale as knockoffs on the pavements of street markets. A fake shiny Gucci bag next to fragments of an old broken playground. The materials reflect both my memories and materialist, visceral desire and longing, suspended in place and time, fixed in collapse, wars and turmoil. Humor plays a central role in my work, reflecting the juxtaposition of extreme stress of migration with the universality of human errors.

LM: You presented a performance in the space towards the end of the show’s run. Can you talk a little bit about what happened and how the works in the show were engaged during your performance?

KG: As part of this project, I have been documenting my thoughts about the war in Ukraine and my relationship to the country as an immigrant. I performatively read some of these stream-of-consciousness textual poem excerpts, handwritten on the back of recent drawings, which I positioned around the space, mapping the territory, accompanied by a commissioned sound. I wore a newly handcrafted headpiece, resembling the sculpture helmets I made for my parents, utilizing some material leftovers from the two paintings in the exhibition, attempting to energetically shift the atmosphere of the site in front of witnesses.

LM: What does it mean to read performatively? Can you elaborate on the process of commissioning sound for your performance?

KG: To me performative reading can take on many formats, from accompanying gestures and movement to creative vocalization to the text’s appearance etc. Text and sound are relatively new mediums in my work, which often materialize through collaboration. For this project I have commissioned an original work by multimedia artist, Sarah Martin-Nuss. It is a 15 min composition based on my recent collection of a variety of specific sound sources, such as my mother’s singing, war sirens and Western news reporting about the war. It is a symbiotic process of my inspiration and ideas, dialogue and the collaborator’s vision and interpretation. Th e sound has been applied to the video included in the exhibition and acts as a background for a series of ongoing performances.

Katya Grokhovsky’s solo exhibition Point A: Chapter One at Ortega y Gasset (363 3RD Avenue, Brooklyn, NY 11215) is open through October 9th, 2022. On its last day, it is open 3-6PM and an Artist Talk moderated by Zahar Vaks will take place at 4PM.

“Too Much of Everything;” an Interview with Matthias van Arkel 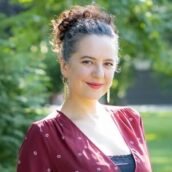 Guest Writer, Cultbytes Leeza Meksin is a NY-based artist working in painting, sculpture, public art and multiples. Her recent site-specific installations include Turret Tops at The deCordova Sculpture Park and Museum in Lincoln, MA, and Column Squeeze at CLEA RSKY in Brooklyn, NY. In 2021 she was awarded the NYSCA/NYFA artist fellowship for Interdisciplinary Work. She teaches art at Cornell University and is the co-founder and co-director of Ortega y Gasset Projects. l igram l