The archival exhibition “Betsy Damon, Passages: Rites and Rituals,” at LaMama Gallery, presents a decade of New York-based performance artist Betsy Damon’s artistic inventiveness from over 40 years ago; covering the years from 1976 until the late 80’s. Through photographs, videos, descriptions, testimonies, and scripts, we watch as one performance gives rise to the next; it is a view into an artist’s working process as much as a historical narrative. Damon’s cycle of rituals, starting with “Body Masks” (1976) and concluding with “Listen Respect and Revere” (1986), present a ten-year body of work in which Damon simultaneously defined the notion of public performance art while also generating a set of functioning feminist rituals that address rape, the erasure of women’s narratives from history, as well as providing safe spaces for the exchange of stories among women.

Damon preserved her performances with accuracy and clarity that mirrors the scientist’s desire to see an experiment reproduced. The performances are described in detail in scripts and essays by the artist, and accompanied by photographs were kept by Damon in her personal archive, in her studio. Working with the artist for the first time, the exhibition’s curator Monika Fabijanska has selected pieces from Damon’s archive and woven them together into a fluid narrative.

“Immaculate conceptions are entirely absent from art history,” says Lucy Lippard, an American scholar and early champion of feminist art, and this has a double meaning for Damon. In the first iteration of “Blind Beggarwoman” (June 15, 1979) Damon engages the story of the virgin birth in order to critique and utilize it, but in the metaphorical sense from which Lippard is speaking. While Damon planned and described her interventions in advance, much of the excitement of the interactions emerged from the mystery of the artist’s rituals. In “The 7,000 Year Old Woman,” Damon slowly removed bags of colored dust that were tied to her body and left them on the ground for the audience to take—420 bags in all—as she slowly followed a spiral drawn on the ground by another artist. And she could never be sure what how the audience would react. In a later project, “Blind Beggarwoman” (June 15, 1979), Damon costumed an artist colleague, Marcia Grubb, as the Virgin Mary in the first iteration of “Blind Beggarwoman” (June 15, 1979), Damon was able to draw a great degree of sincerity and vulnerable openness from the public through her portrayal of a blind person. The performance presented not only a safe space but also a full supernatural experience: mimicking a visit by a mythological/religious figure. This spiritual environment made it possible for many of the spectators to tell meaningful life experiences to Damon and Grubb. Damon’s gestures fit into a long lineage of ritual performances, street theater, and religious spectacle. The performances, in general, create functioning spiritual environments for herself and her viewers.

The documentary photographs are artworks in themselves, both documents of Damon’s practice, and nostalgic images of New York’s experimental art scene in the ’70s and ’80s are on view. Born in 1940, Damon received her MFA at Columbia, and by the late 1960’s, early 70’s had embedded herself in the growing Women’s Movement. She participated in the landmark Womanhouse at CalArts, organized by Judy Chicago and Miriam Schapiro. Damon returned to New York and began to develop and carry out her own public performances. In the photographs of her performances, there is an equal weight placed on the faces of the spectators and their response, as well as the details of Damon’s performances. During pieces such as “The 7,000 year old Woman” (October 31, 1977), “Blind Beggarwoman and the 7,000 Year Old Woman” (October 18, 1979), and “Meditation with Stones for the Survival of the Planet” on West Broadway, NY (1982-late 1980’s), we see not just a supportive gathering of like-minded artists, but viewers embodying a wide spectrum of responses; curiousity, disdain, bemusement, as well as heartfelt engagement.

During Damon’s performance of “The 7,000 Year Old Woman” which took place on Prince Street on May 21st 1977, a group of boys threw eggs at her during the ritual. The stark black and white photos of this event show Damon transfixed and seated on the cobblestones while little boys gab the small bags of dirt and sand she has laid out in the circle which circumscribes the performance. This bespeaks a level of intimidating power in the spectacle that prompted not only admiration but fear, bred of the unknown, in the spectators as well. In a second image, little girls sit as entranced as Damon herself. There is a level of bravery to Damon’s practice that seems to thrive on the contradictory responses of deep sympathy and empathy as well as harsh rejection and fear—both responses indicate you are doing something right.

There is a strength in these rituals that encourage us to believe they have continuity, that they may happen again in different or similar form, standing on the shoulders of Damon’s initial practice.

There are video recordings of the performances from which visitors can evince pace and choreography but they are not the focus of the exhibition. The meter and beat of Damon’s work comes through the verbal descriptions and is punctuated by the images. The framed brochures, flyers, invites, and magazine articles pull the viewer out of the imposed dream-state that begins to manifest from the deep concentration justly demanded by Fabijanska’s tight and substantial hanging of the works. The mimeographed sheet requesting “GALAS [Great American Lesbian Art Show] asks that only women attend this performance” or the type-written card where Damon states: “If you put stones and feathers together they will rapidly fly away” remind the viewer that these events actually took place.

There is a strength in these rituals that encourage us to believe they have continuity, that they may happen again in different or similar form, standing on the shoulders of Damon’s initial practice. Damon and her circle of artists, such as Harmony Hammond, Amy Sillman, Helaine Aylon, and May Stevens, have gone on to influence a new generation working both in performance and outside that purview, artists such as Kate Gilmore, Xaviera Simmons, Jodi Lyn-Kee-Chow, and Juliana Huxtable. The tradition of performance and ritual continues to be a guiding force in the artist movement for equality and universal civil rights. 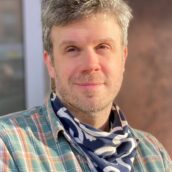 Guest Contributor, Cultbytes Will Corwin is a sculptor, curator, and art critic based in New York. He has written for Frieze, Bomb Magazine, Canvas Magazine, ArtCritical, and currently writes for The Brooklyn Rail, Art Papers, and Arcade Project. As an artist, Corwin has exhibited with The Clocktower Gallery, Theater for the New City, La Mama, Middle Collegiate Church, PS122, Judson Memorial Church, George and Jorgen Gallery and Gazelli Art House in London, Frise Kunstlerhaus in Hamburg, Red Gate Gallery in Beijing and the Taipei Artists Village. l igram l