When the NYC Parks Department announced they would remove a number of animal sculptures from New York playgrounds, people revolted. In response, the city created the first “NYC Parks Home for Retired Animals” in Queens, where NYC Parks Commissioner Mitchell J. Silver says New Yorkers can, “come stop by and say hello to an old friend!”

For artist Kristina Libby, this public response is indicative of the unique emotional relationship people have with animal related art. “I can think of almost nothing comparable, where people are so angry that the city actually creates a response like that,” Libby says. “When you look, you realize that there are actually animals everywhere in New York, in all kinds of buildings. I found that fascinating.”

Henry J. Stern, a former New York Commissioner, is responsible for a substantial number of these statues. His work served as inspiration for Libby’s newest project, In Plain Site, an animal focused public installation in Greenwich Village. I took a call with the artist a day after the show began to discuss her interest in animal related art, the story behind her “Chunkos,” and her desire for viewers to learn to “live bigger.”

“We really wanted to do something that would bring joy and spontaneity and surprise to the neighborhood,” Libby explains, referring to her collaboration with the Greenwich Village Alliance. “Even when we just give animals a name, or a jacket, we identify with them in a different way. It wakes people up from their basic experiences. Why is this animal in the middle of Astor place? It has an enlightening quality.”

The Chunkos, the animals at the center of In Plain Site, are life-sized, painted in bold, vibrant colors. Inspired by real animals, Libby channeled their personalities into the placement and aesthetics of each sculpture. “To me, they occupy this whole world,” Libby says. “This is a moment for them to come out.”

Ellie, the elephant, Libby describes as a “tried and true extrovert,” inspired by an elephant she observed on a trip to Africa. “She was this little child, who kept wanting to get closer and closer. Her mom came and swept her up. I had this impression, she just wanted to see what everyone was doing. With that behavior, I felt she had to be front and center.”

Next to Ellie is Herschel, who made the news in the 1980s for consuming 800 pounds of steelhead trout an hour. Described by the LA Times as “​​a fat, sassy California sea lion,” Libby says that Herschel “was single handedly responsible for the decimation of that species.” In her exhibit, his physical hunger is treated as a “hunger for experiences.” Ellie and Herschel stand together, looking out at the world.

Libby’s favorite character, a shy hippo named Mabel, remains hidden in this exhibition. “She’s creative, she’s an introvert. It wouldn’t make sense for her to be there,” Libby says. “She’s the kind of person I identify with.” When I point out that she described Mabel as a person, Libby laughs. “I extremely identify with Mabel,” she emphasizes.

For Libby, playfulness is central to her work, and the work that inspires her—one of her favorites, the Alice and Wonderland sculpture in Central Park. “We have so many serious sculptures memorializing people. Our experience of being human is much more playful than that. I want to be amused, I want to smile! What if art can help us get outside of ourselves?”

In this moment, Libby touches on one of the most powerful elements of her work—her ability to tap into the vital and imaginative capacity of her viewers. Much like the visitors of the “NYC Parks Home For Retired Animals” saying “hello to an old friend,” viewers of Libby’s work cannot help but be moved.

Libby’s works, often public, are centered on emotions and support. She founded the Floral Heart Project where she laid out flower garlands in public to provide a place to grieve the victims of COVID-19. And, together with thousands of others living in the United States, she is advocating for a COVID-19 Memorial Day.

At its core, Libby hopes her work will inspire viewers to live the fullest expressions of themselves: “the tagline of the piece is ‘live big.’ We are all living this mask of who we think we’re supposed to be, and how we operate. I can’t be an accountant and a public artist. The world is chaotic. We live in such a deep state of chaos, that we want to compartmentalize people so that we can make sense of them in the world. We want to make things as simple as possible.”

A corporate tech employee turned public artist, Libby is the embodiment of this message. “That’s the role of our intuition,” she explains. “We are processing on so many levels that are so complex that we can’t explain the rational calculus to each other. I’m in my late 30s and I made a bunch of chunky animals. Why am I doing this? I really believe in the message: we have to further lean into the complexity of ourselves and our society.”

In Plain Site is on display from June 10–June 12th in Greenwich Village, New York City. 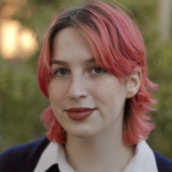