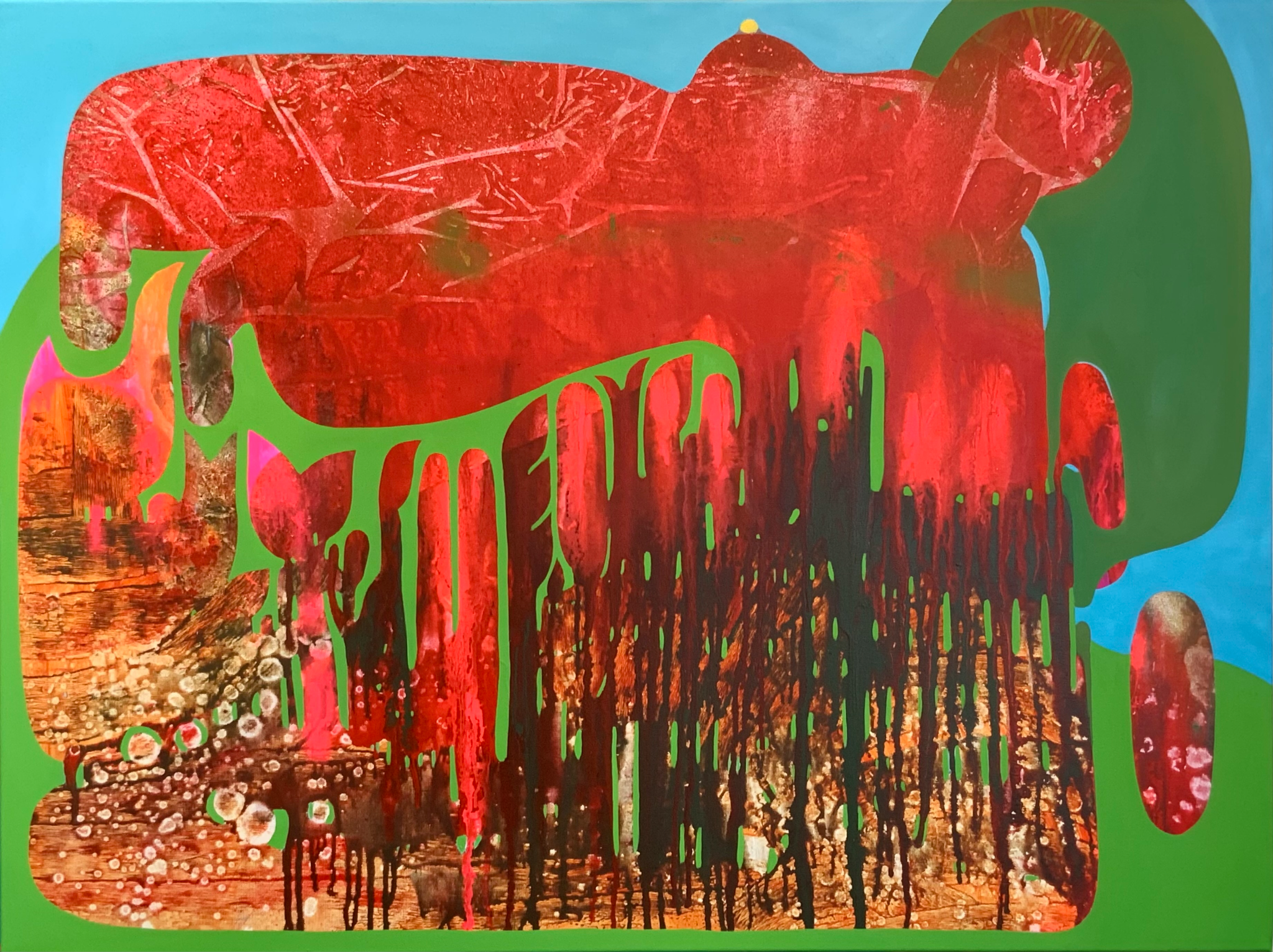 In 2006, less than six months after artist Vian Sora got married and moved to Istanbul, her uncle, Ammar al Saffar, then Deputy Health Minister in Iraq, was kidnapped from their family home in Baghdad and later killed. Terror invaded Sora’s life as she lost her uncle and her home, so she decided to move to Dubai with her husband. There, she filed a sharia refugee/humanitarian case for her family in the United Arab Emirates. In 2007, after many trials and tribulations, Sora re-settled her parents and siblings, but the financial crisis of 2008 quickly derailed their attempts at re-building a life. Determined to persevere and with few remaining options, Sora and her husband departed for his hometown of Louisville, Kentucky.

“It was a very difficult period,” she says. “My family and I were consistently denied visas to America. I moved between four countries in five years and I struggled to find time to paint or studio space. I confronted multiple difficulties in re-settling my family, particularly since our family home in Baghdad was forcibly taken,” she says. When she finally reached the United States, she and her husband were the primary caregivers of her parents and instead of dedicated studio time, she found herself between two worlds. “It was a low point in my career,” she continues.

However, she was no stranger to struggles or social upheaval. Born and raised in Baghdad, Sora witnessed multiple wars in Iraq firsthand, suffering personal loss while sharing in the collective loss of her country. From a young age, she used art as an outlet to work through the trauma of conflict and displacement. She was surrounded with artists in her daily life as her family ran an antique and art auction. “The creative class was all I knew,” she says, “I picked up a brush at age eight and never let go. I am a self-taught painter.”

While moving to Kentucky proved difficult for her career, she continued to make bright paintings with juxtaposing colors that burst with energy. Working through her past traumas, she used art to uplift others struggling with painful situations. “By relinquishing control of the paint itself and allowing it to work on the canvas, my work attains a measure of hope: if nothing is settled and determined, any outcome is still possible, thus I utilize vibrant contrasting colors set often on burnt or earth tones,” she says.

After many years of working in the studio, Sora’s community in Louisville embraced her work. Her paintings caught the eye of the Speed Art Museum and, in 2018, they acquired Echo and Narcissus. From then, her career took a dramatic turn and she began gallery representation with Moremen Gallery in Louisville and with Luis De Jesus in Los Angeles in 2022.

The speed at which Sora’s career changed may seem like luck, but behind this recent success are decades of hard work. In 1994, she started her undergraduate work at Al Mansour University in Baghdad, where she studied computer sciences. “During my studies, I found myself immersed in the forefront of technology, but always with a foot in the past, so I began to participate in archeological projects in Iraq to document and discover what lies within our undiscovered lands, the Fertile Crescent. While simultaneously looking to the future and the past, I began to concentrate on my painting and pushed as much as I could to get studio time,” she says. This consistent effort led her to become a member of the Iraqi Plastic Union Society for painting in 1998.

She began to develop a body of work and met the curator and director of Inaa Gallery, in Baghdad where she held her first solo exhibition, Pulses, Shapes and Sense of Time. “This series dealt with our inner journeys, and the subconscious pulses, feelings and senses that shape these experiences; the human connected neural network,” she says. “The show was not only an honor for me, but it also led to meeting Noori al-Rawi, who wrote the curatorial statement for the exhibition. As a painter, his influence on my work is undeniable, particularly his pushing representation and abstraction. He is among many of the treasures in Baghdad that nurtured and guided my career.”

Taking her early experiences of teaching herself art during periods of war, displacement, and tragedy, Sora’s practice, like that of many other immigrant artists, embodies perseverance and resilience. Now, she uses her art to reflect on life in the US and Kentucky bring awareness to critical causes, in particular the need for abortion healthcare, an issue that is increasingly urgent as we approach the midterm elections.

In Kentucky, abortion has been completely banned with very few exceptions, forcing people to travel out of state to receive the healthcare they need. Sora began making work to address the reversal of Roe v. Wade, including Hidden, Seek (2022), which confronts the dilemma of having healthcare choices stripped away, in some states criminalized, forcing people to hide, then seek protection for medical alternatives.

“Artists and creatives are critically needed to challenge the narratives, which is especially the case in ‘flyover’ states. Presence and relevance are necessary in each state, and not isolated in the larger American cities. The frontier in any battle must remember the center,” she says as she quotes Abraham Lincoln who highlighted the importance of winning Kentucky to win the Civil War: “I hope to have God on my side, but I must have Kentucky.” As her studio is on the edge of the Ohio River facing north, her perspective is literally driven by what she sees daily.

Sora donated Hidden Seek, along with Verdict (2022), to a recent benefit auction for Vote Save America’s Immediate Abortion Fund, which was organized by the curatorial collective Grandma and hosted by Artsy. The Immediate Abortion Fund is particularly crucial in states like Kentucky. The fund provides assistance to people in need of resources to pay for abortions or to travel out of state to get one. It also supports legal defense and funds independent clinics so they can continue to provide services, even if the people they assist are unable to pay.

Sora hopes to work on additional projects that bring awareness and assistance to critical causes so that her story of perseverance and determination continues to inspire others. “I remain a champion of our rights in my local community,” she says. “As a survivor of multiple wars, and still fighting through the refugee and immigration system for my family, my work is a message of hope and beauty that arises even amongst war, destruction, tumult and senseless discrimination. I think my works can assist others never to give up, no matter the explosions that occur, and see that life can regenerate in the detritus.”

Election Editorial: Setting the Stage for the 2017 Battleground