On the first day of my residency upon entering my new studio space at El Museo Del Barrio I found myself asking, “What should I do?” It took me until now to understand that not planning ahead but instead collaborating with and listening to the artistic community, visitors, and museum staff around me would allow me to produce good work and engage my audience. 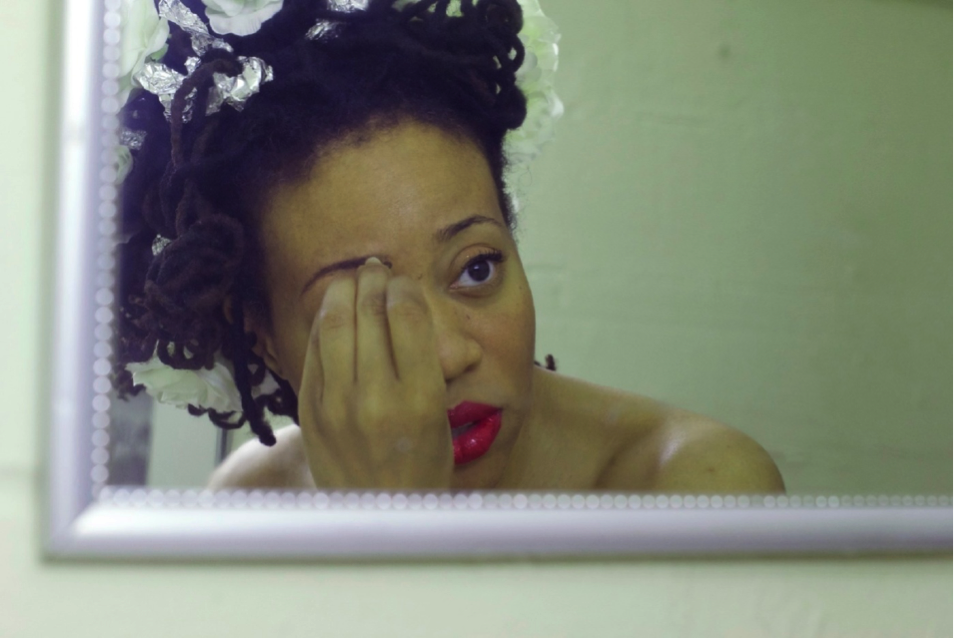 Ayana Evans in her studio at El Museo Del Barrio. Courtesy of the artist.

My residency at El Museo del Barrio marks the first time in 12 years that I have had an art studio. Not only was the space a designated workspace for me but also a space in which my work and artist process are on display for the public. It’s not that I was unprepared for my residency, quite the contrary; I had laid out an elaborate schedule. The foundation of my residency was that I aimed to build an artistic persona based on the idea of the artist being a star. To uphold this persona – exuding a sense of perfection – I stipulated a strict dress code. I would work wearing my signature catsuit by Butch Diva and heels. Whelp. I cheated a few times; on occasion I showed up to the studio in sweats and gym shoes and for certain tasks I would take my heels off (they hurt!). I had planned three thematic weeks; “Beauty Week,” “Work/Werk Week,” and “Legends Week.” In addition I wanted to install a selfie station and perform “I Carry You and You Carry Me” on two evenings. As my schedule fell apart I let myself be inspired by impromptu collaborations and saw my themes merge. This allowed me to strengthen the leitmotif of my residency, the shaping of a persona. I even got my residency prolonged by two months! It all happened and much more, just not as planned. 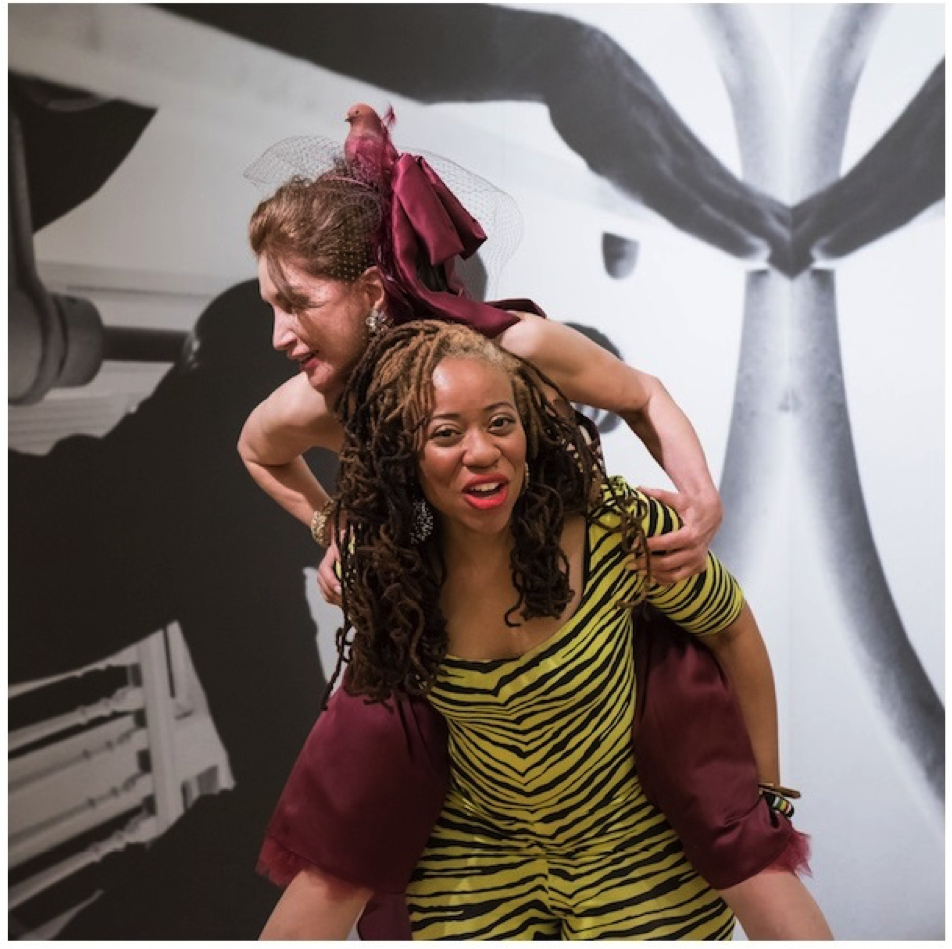 Ayana Evans carries a museum patron in “I Carry You and You Carry Me” at El Museo Del Barrio. Courtesy of the artist.

Initially, “Beauty Week” was to be a series of daily beauty performances – instead I contextualized the labor of beauty in my performance sets. During the museum mile bonanza known as Museum Mile Festival, when thousands flock to New York’s museums, El Museo Del Barrio was a buzz. My friend and fellow performer Esther Neff gave me a beauty make-over, inspired by Kelis (the singer who is a true make-up adventurer), to prepare for my performance “I Carry You and You Carry Me.” The performance consists of me giving viewers piggyback rides. As I began to, literally, carry out the performance Neff offered makeovers to museum patrons. I ended up giving piggybacks rides to people with the same make-up as my own – the effect was powerful and it was a great performance night. I realized that labor and beauty are so intertwined in my work that separating them didn’t interest me – thus I abandoned the idea of a separate “Beauty Week.” As museums have multiple opening for one show (VIP opening, Members Only, Public roll-out) I performed “I Carry You…” on three evening in one week, instead of one. The “Work/Werk” theme was suddenly becoming a reality. LOL. It bothered me that the outcome, in my mind, was less conceptually neat than what I had outlined but as my work deals with all three themes at once the performance sets were well received.

The Residency Gets Extended!

While my mind was spinning from how many things weren’t “going as planned” the museum offered to extend my residency to August 20th. Thanking my lucky stars I said yes immediately. As I began to plan for July and August I gained more clarity; in reality my first plan would be best executed over three months instead of six weeks! Although my residency was longer I still felt at a loss in terms of time. I was working 12 hour days. The hours spent at the museum, a summer camp job I was doing on the side, preparing for group shows in London, Italy, Brooklyn, and Queens, working on side projects, and answering emails took quite the toll on me. I was happy to receive an emergency grant from Foundation of Contemporary Art but, although time is money for some money is never time. For a rising artist the struggle to find time is real! Luckily Nicolas Dumit Estevez said, in his signature calm but stern voice, “you have to cancel something.” Dumit Estevez has dealt with many over worked artists as curator of the residency “Back in Five Minutes,” which is part of a larger program entitled “Office Hours(OH).” I took his advice – I completely canceled my plan allowing new projects to organically emerge.

“I am moving into the second week of

#SQUADGOALS; because what is a dope persona

without a dope squad?”

This month is coming along well because I let go of my rigid plan. Surprisingly, as I relaxed everything fell into place. I began working with an amazing intern. I experimented. During a week of performances I live streamed my work for the first time, an invaluable tool. By live streaming more people than those who have time to visit the museum can be involved in my work. I also started new projects. I staged performance incorporating the museum guards that allowed them to sit as long as I held an awkward pose in heels. My friend Davis Thompson-Moss out did me in this!! His pose was flawless. Mine, not so much. Headlined by the quote “you are the company that you keep” I summoned my performance art squad to plan events. I am moving into the second week of “#SQUADGOALS;” because what is a dope persona without a dope squad? One event took place during Uptown Bounce another was a performance picnic. And, this week I will collaboratively perform with Dominique Duroseau and Lisette Morel. I am eager to see what else will take shape. 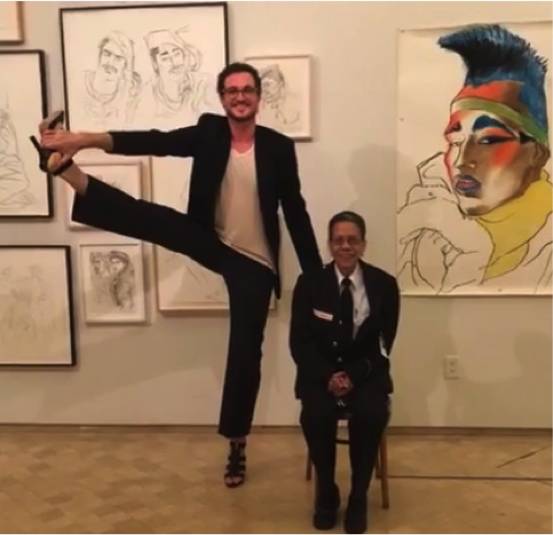 So far new ideas have come to me and creative ways to promote my residency have evolved. I have also learned how to navigate my artistic work process with an ever present audience. I learned not to fight the public interaction. (Spoiler alert: It is best to cheat and do the work that requires silence at home, then bring it for install and chit chat time at the museum). I am finding my happy medium.

I will keep you posted on what unfolds next.

What is the Difference Between Abstract Painting and Abstract Action? l Soundbytes by Cultbytes