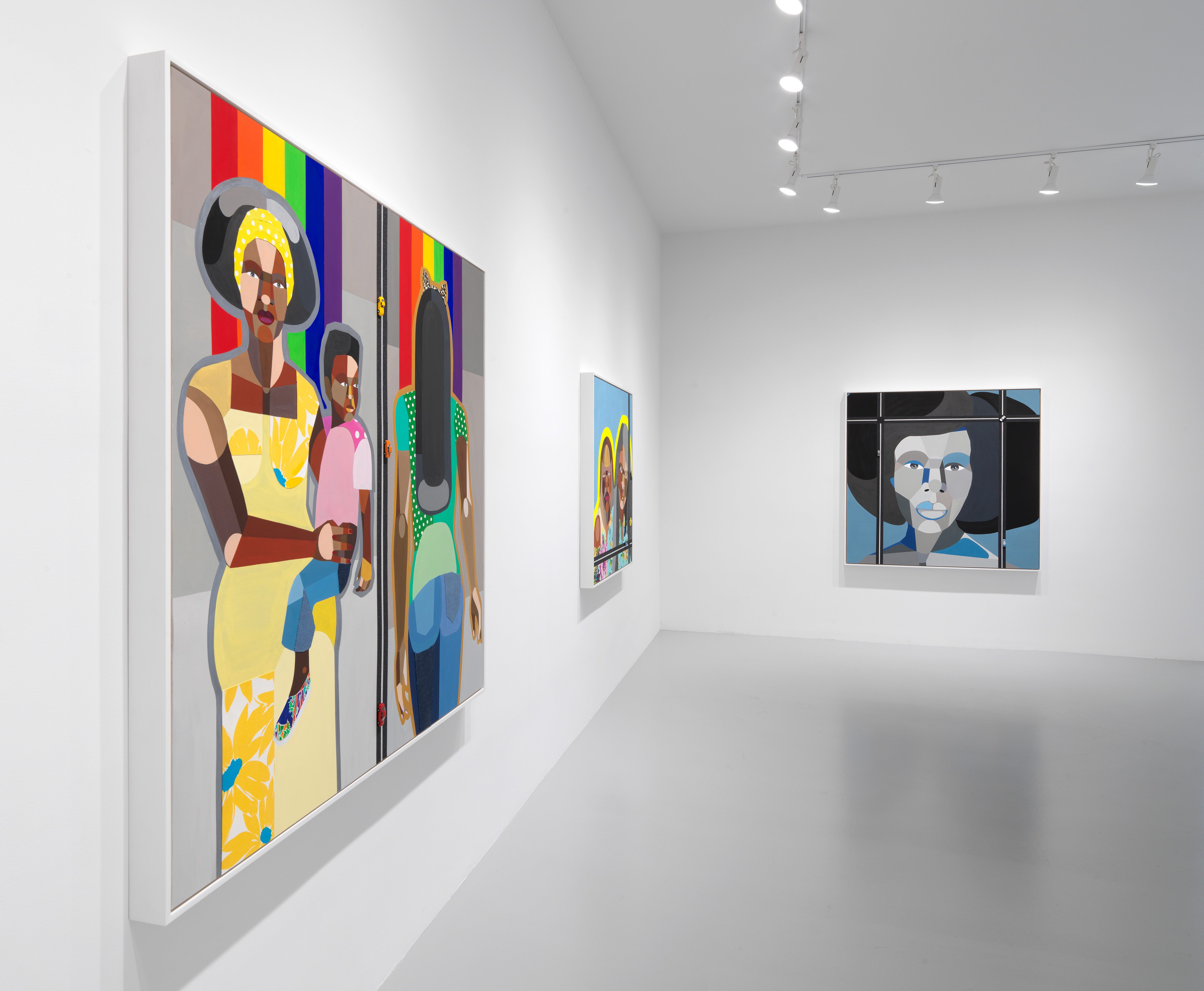 CHICAGO- New York-based multidisciplinary artist Derrick Adams has made a career out of engaging both words and objects through collage and drawings, to investigate the implications of societal norms. His signature bold geometric layouts directly address social-political ideas connected to Black cultural identity. Based on popular culture and making use of the vernacular, Adams’s works deconstruct and reconfigure the black body, lifestyle, and biases of acceptability.

For instance, the immersive installation “Black White & Brown,” at Primary in Miami, presented abstract shapes, gestures, and re-imagined material culture that used highlighted the black body as a conduit for performative mechanisms.

Adams’s newest exhibition at Rhona Hoffman Gallery in Chicago titled “Ins and Outs: Figures in the Urban Landscape” (on view from May 31-July 6, 2019) is a study of semiotics and a continuation of his cultural inquiry through methods of deconstruction.

At first glance, Adams’s seven new collages evoke the leisure and comfort of African-American life, black bodies, and the African-American experience. While not explicitly related to Chicago, the location of the show and history of the African-American experience in Chicago cannot go unnoticed. Each piece is painting with collage on wood panel, featuring model cars on highways rolling across the picture plane. They are all titled “Figure in the Urban Landscape” followed by a number. The anonymous nature of each figure allows for the viewer to truly take place in the African-American landscape of today. The history of urban planning in Chicago has had a lifelong effect of the city’s African-American residents, in this show, Adams continually revisits leisure through the environments he builds for his figures which questions how we exist in the environments built around us. 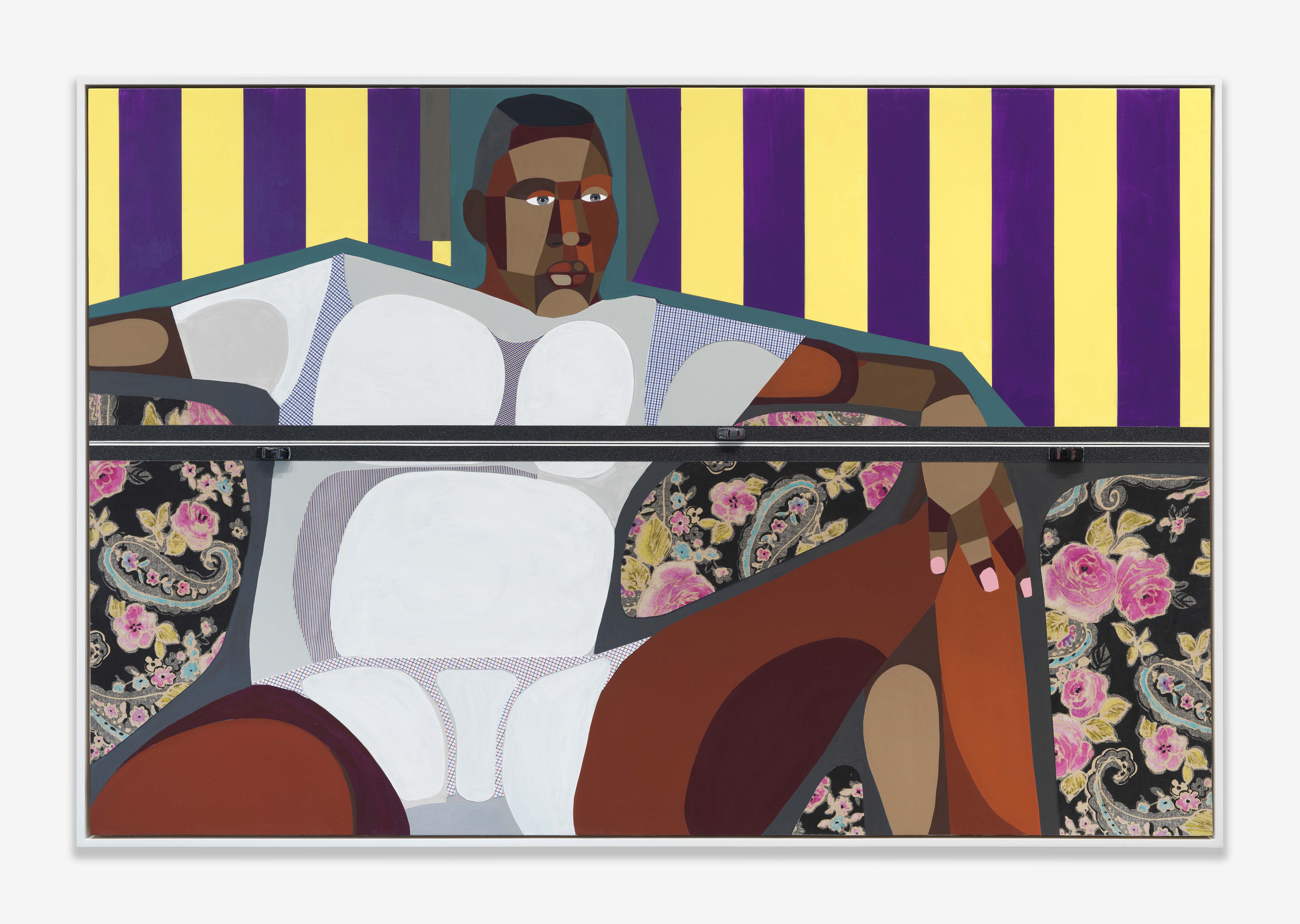 “Figure in the Urban Landscape 29” features a black male figure sitting in a relaxed state looking at something beyond the canvas. The figure can be perceived as both menacing and joyful, depending on your perception of the black community, and specifically, black men. The connotations of laziness and lack of drive can be evoked on one end while leisure and comfort due to success can be another conclusion drawn. This type of conceptual paradox is a characteristic of the whole exhibition, the scenes do not directly tell you what is happening but instead, question what you believe is happening. By creating imagery that the viewer can interpret in two ways Adams proves that perception, at times, is inherently subjective.

Perceiving the figure as menacing would not be entirely unfair, based on the disproportionately high percentage of black men in American prisons (31% of male prison population), higher unemployment rates (6.3% in comparison to white 3.2%), or African-American population living in poverty. Some would say this is a direct result of the abuse which America’s black population have endured since Americans began importing African bodies to work as slaves while others, the alt-right for instance, have found other less logical reasons. However, or despite, continued systemic racism, many African-Americans live in prosperity; these are the gradients that Adams so skillfully evokes in his work.

Each figure’s environment seems to exist based on them, meaning the surroundings take form around the figure and not the figure fitting in the background; thus they seem to exist freely. This way of rendering each panel allows Adams to create alternative narratives for these black figures. The environment adjusts to the individual thus revealing the power in black autonomy. He renders his figures in a multitude of colors, shading his black figures in a diverse range of shades. The conjunction of these tones speaks to the overall message of the show, revealing the vibrancy of the black culture and the similarities regardless of a specific shade. 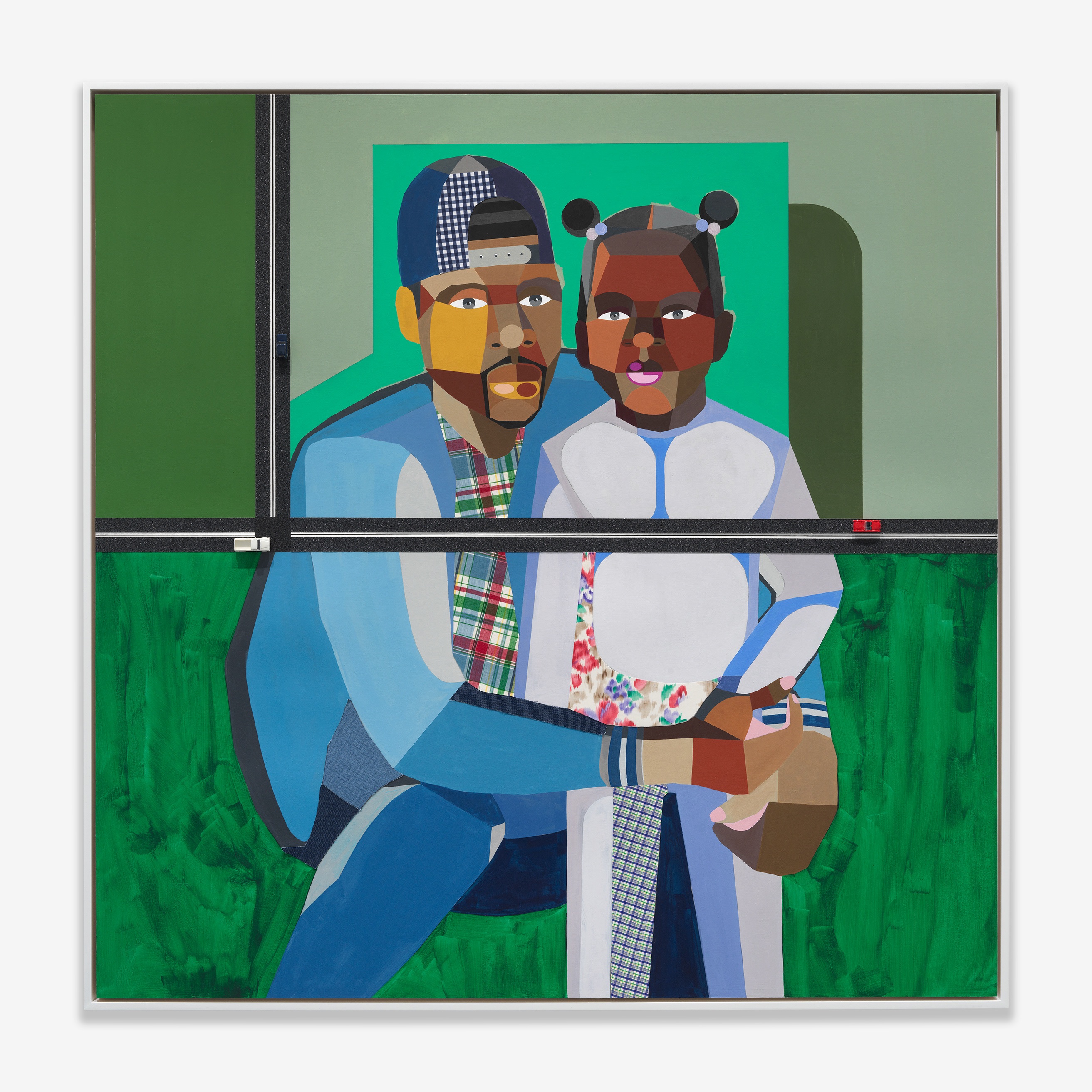 Revisiting the theme of travel, or displacement, Adams uses miniature cars to reference the Black American journey north, also known as “The Great Migration.” This movement involved six million African-Americans from the American South moving Midwest and North between  1916 and 1970. In “Derrick Adams: Sanctuary” at the Museum of Arts and Design, the 50 works in the exhibition reimagine the safe spaces for nonwhite travelers during the Jim Crow era in America. Specifically, Adams’s centered his work around “The Negro Motorist Green Book,” an annual guide book published by Hugo Green that listed black-friendly businesses – an invaluable resource for travelers. At Rhona Hoffman Gallery, highways are effortlessly interrupted with still-life collages to reveal that the journey and the destination is one and the same. 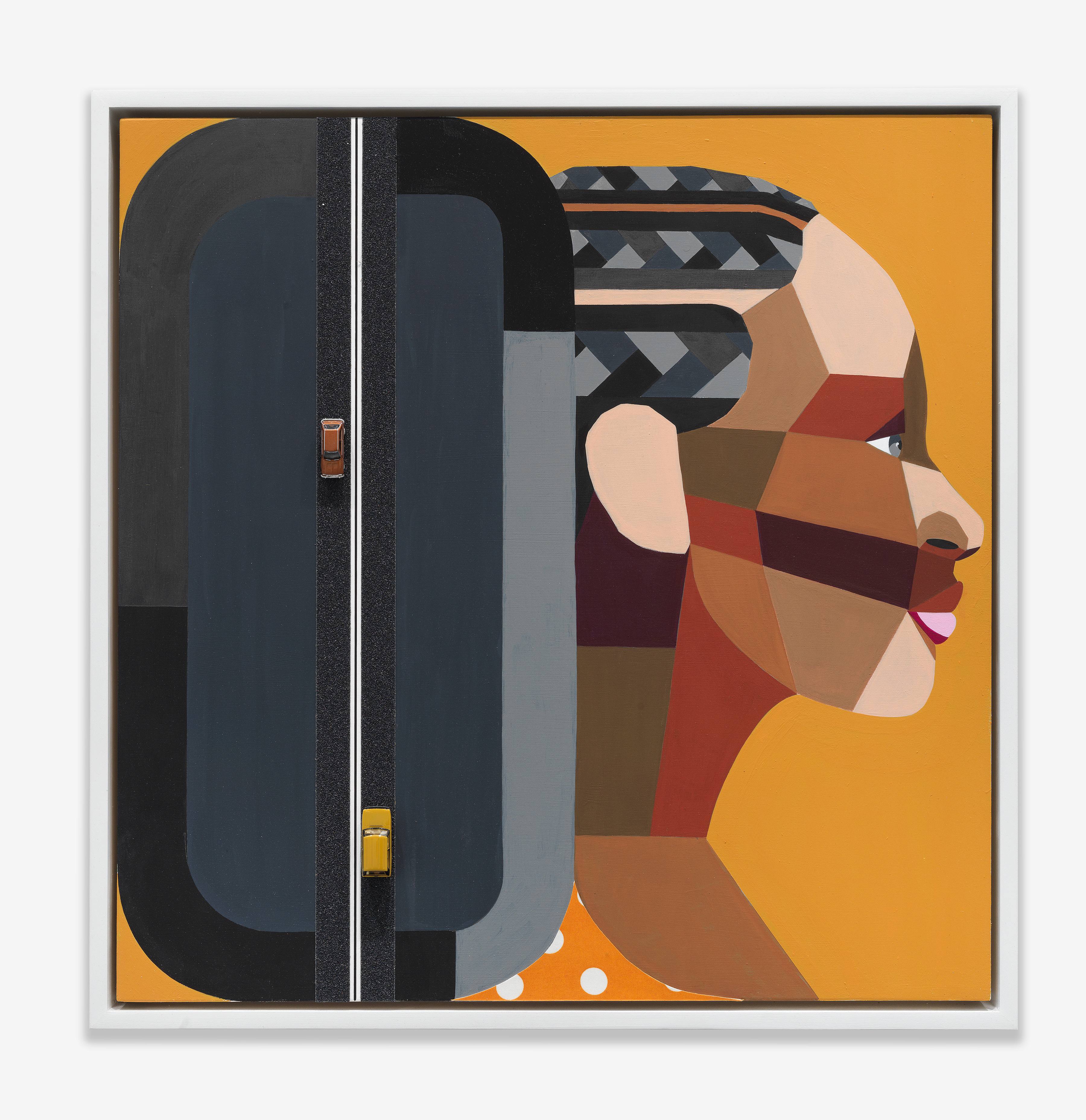 In Adams landscapes, who we are and the objects we have are intricately connected. He plays with shades, patterns, and dimensions, allowing the viewer to see how the work is built up, but also how it can be taken apart. Adam’s seven pieces question how the construction and destruction of collectiveness in the Black community have resulted in an inner struggle, one that cannot be easily defined or detected. These figures exist in their own urban landscape, but the deeper emotion provoked is how these domesticated environments reflect their inner lives. 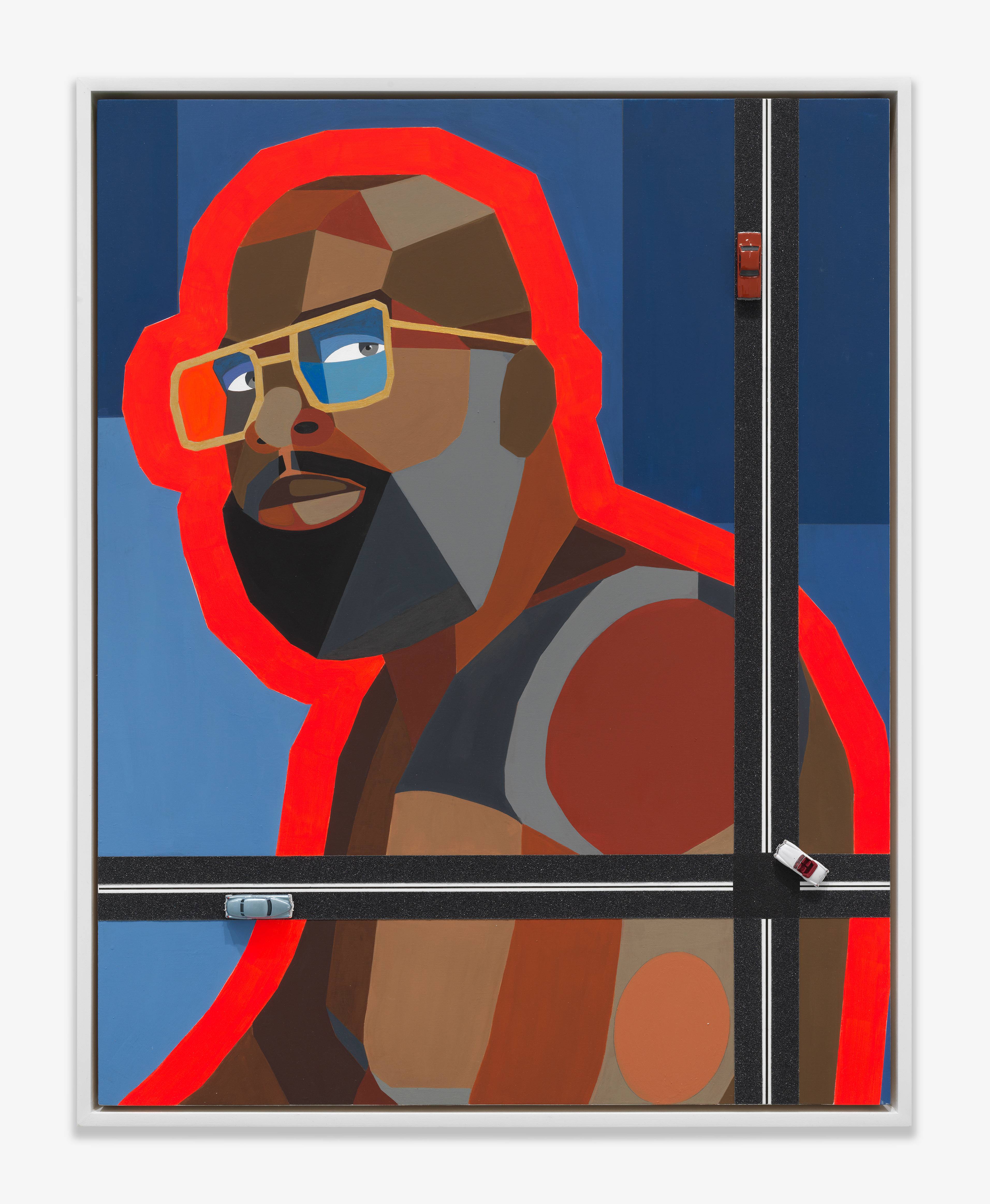 The location for this show is not to be ignored, as Chicago has been the basis for both extremes of the Black experience, from the renaissance beginning in the 1920s to the residential segregation implemented by the City of Chicago that has led to issues of survival and sustainability. Adams’s figures in the urban landscape reflect the tension that the Chicago black community has felt, in conjunction with the collaged images, the viewer can understand the radical ability to deconstruct and reconstruct their experience in their community.

“The Ins and Outs: Figures in Urban Landscape” will leave you directly wondering what your own narrative is, as someone part of the black community and/or as someone who has contributed to the stigmas of the black community. The imagination that Adams presents reveals hope and reality for the current state of race relations. One thing is true, you will be left inside and out knowing that black autonomy can be radical, and it exists within your own morality.

“Your Decolonizing Toolkit:” Freeing Thought From Conditions of Exploit

As Prices For African-American Artists Rise, These Issues Need to be Addressed

How American Artists Aligned With Caribbean Resistance at FIAP 2017