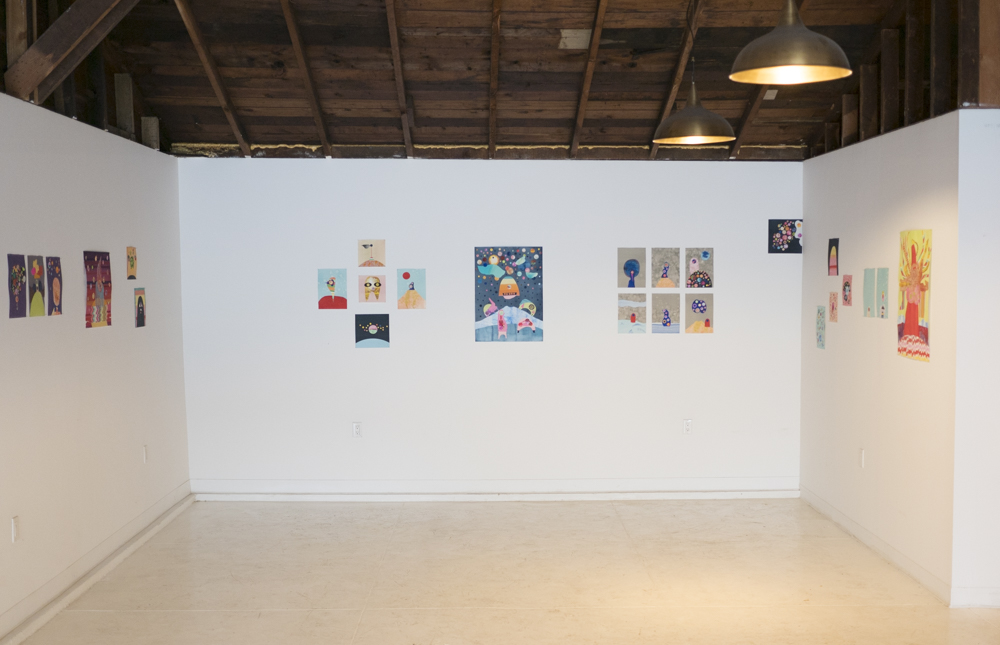 Having already established itself as a gallery in New York City, the team at Ed. Varie has decided to try out the fertile waters of the Los Angeles art scene. The show currently on display in their Eagle Rock location is by the Swedish artist duo comprised of Daniel Rydh and Anna Sörenson, known as Rydh/Sörenson. The exhibition, entitled “Apocalypse,” is the first occasion in which the couple’s works are being shown in California. This series of works is inspired by the colors and creatures of video-games from the late ’80s and early ’90s. Bringing over fifty of their collages of hand-painted watercolor paper to the intimate space of the gallery, Rydh/Sörenson take the viewer on a playful, fantastical journey.

In making their pieces for the show, the artists have mixed and matched paper painted in bright colors and patterns in layers and small geometric shapes. The compositions often have anthropomorphic elements and suggestions of fantasy or outer space. The artists’ little creatures and figures jump and play around mounds and colorful landscapes. Each collage is intimate and, although the show blends cohesively as a whole, the individual works stand out on their own. Some of the pieces have suggestions of volcanoes, mountains, and oceans, while others are purely fantastical. 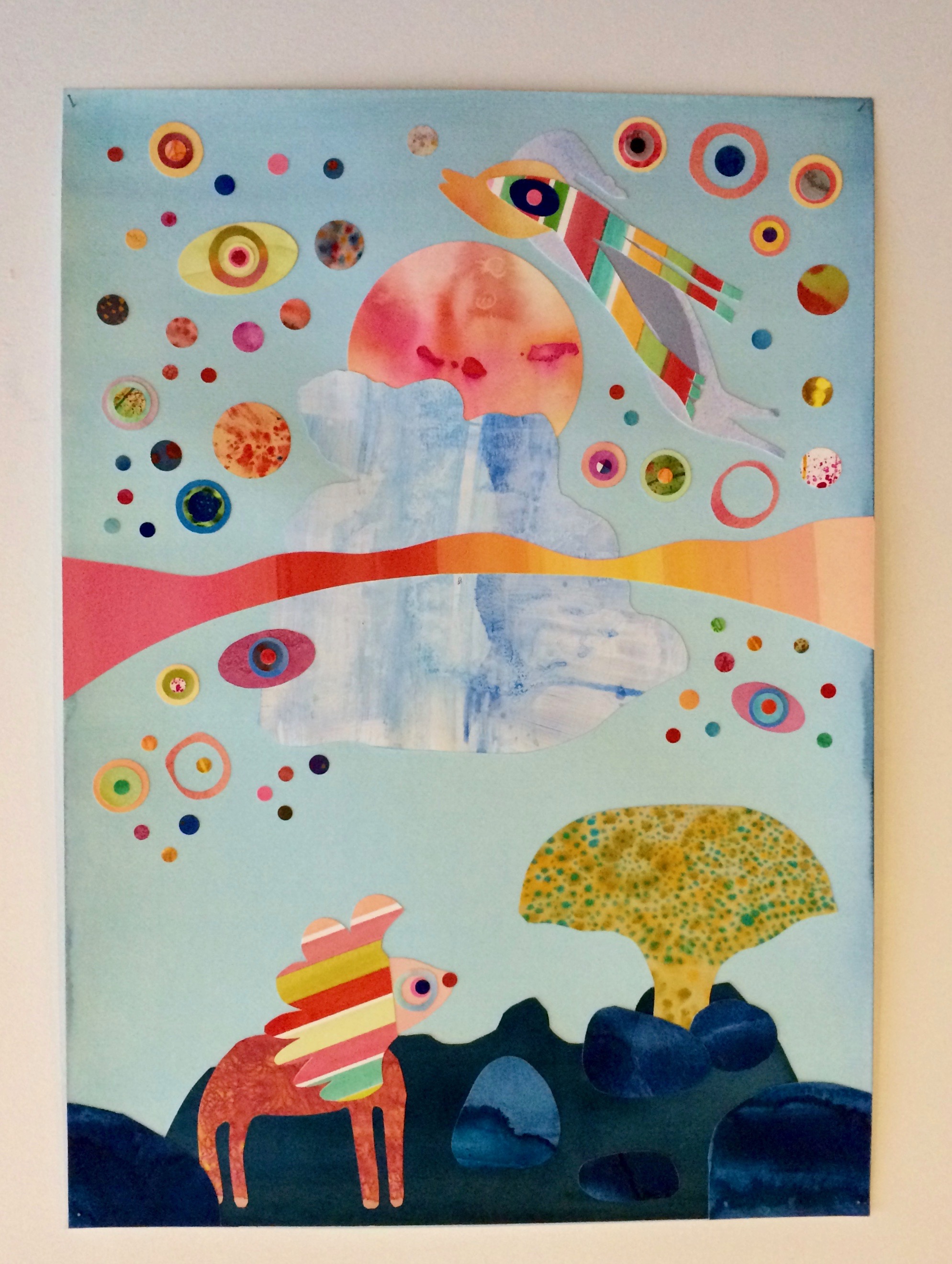 In one collage, a four-legged creature that resembles a deer with a rainbow lion’s mane looks up at a giant mushroom or tree shape. Above the creature is another bird-like figure floating in a colorful, celestial landscape. 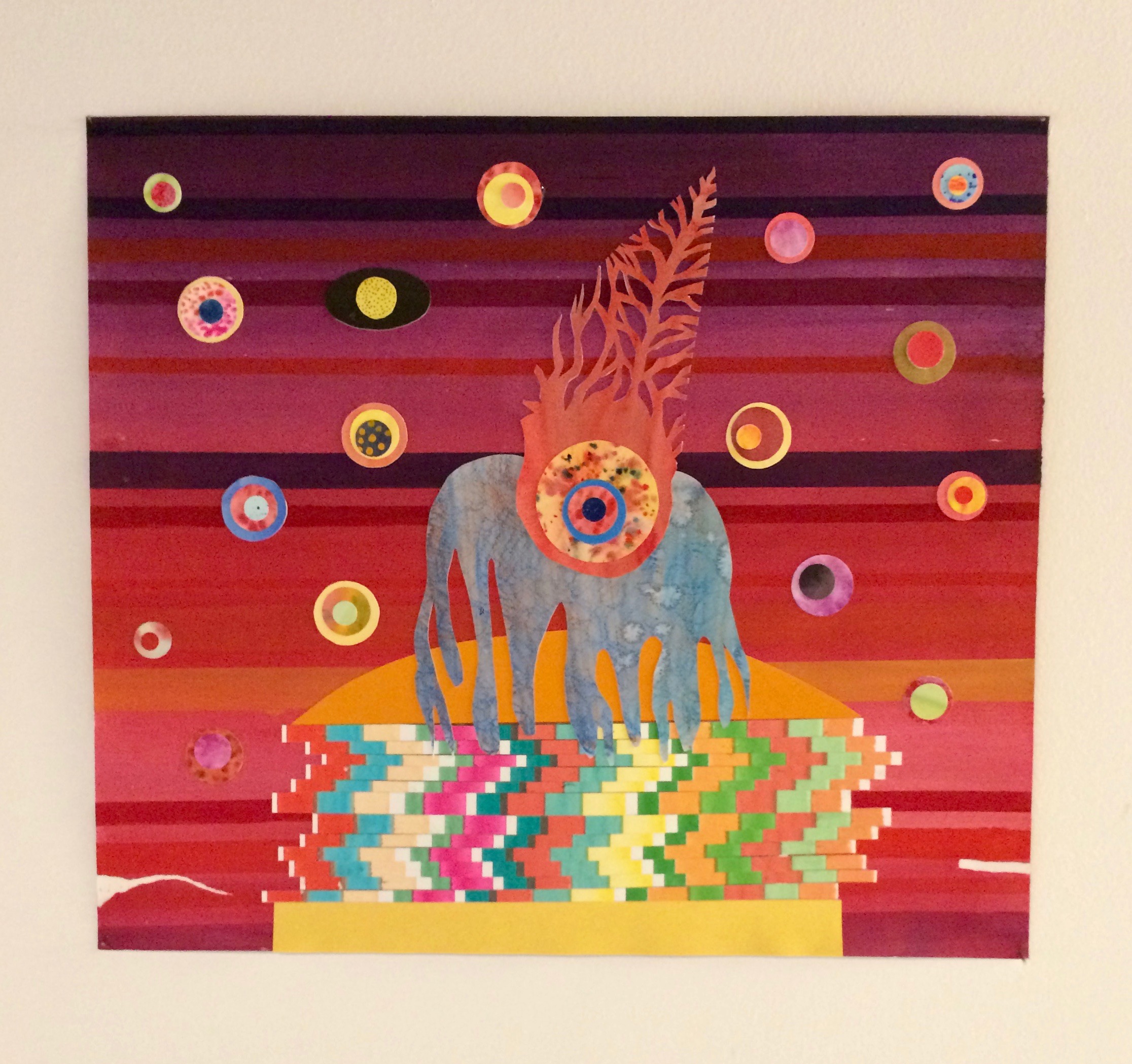 In another equally fantastical piece, the duo has created an amorphous, jellyfish-esque creature with a giant eye that has sprouted roots. The figure sits on top of a mound made up of thin bands of colorful, striped paper.

In discussing their art process, Sörenson explained, “Our apartment is our studio and usually we have many projects going on at the same time. We often have a format in mind, or some colors we want to try out. A common scenario might be that Daniel starts painting a background, and I play around with some painting techniques. We take a food break and let things dry. Then maybe I go for a run and Daniel starts to cut out some shapes. Then he takes a break, and I cut out other shapes and start placing both his and mine. Usually it is very playful and we make each other laugh. Sometimes it is very critical, and big, fragile pieces have to come together and we have to trust each other tremendously.” With so many small elements coming together, one can certainly imagine the trust and synergy the artists must have with one another. 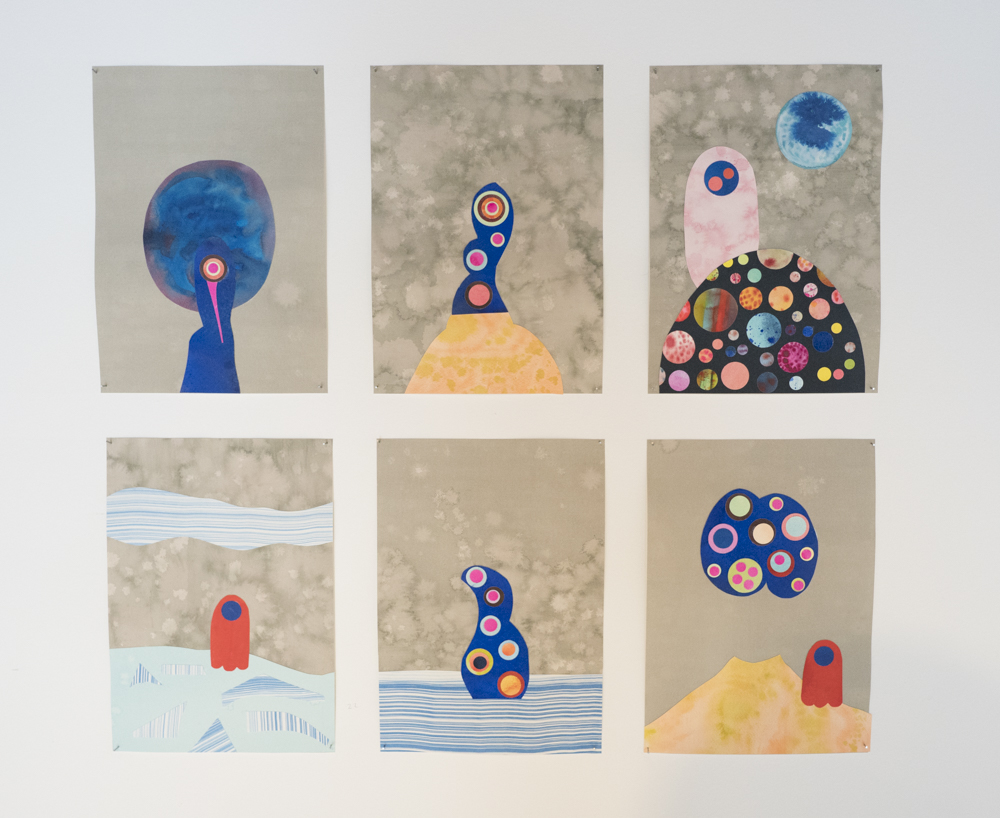 In addition to these busier works, Rydh/Sörenson have also made several smaller pieces with single anthropomorphic shapes set in some sort of other-worldly landscape. Although the two artists have their own distinct styles, there is no sense of discordance in their collaborative works. Elements of Sörenson’s style blend seamlessly with Rydh’s to the point where the viewer can hardly differentiate their hands. On this collaboration, Sörenson writes, “Working together without claiming personal copyright is more in sync with how we interact in online forums than in the art world, which is still obsessed with the artist as a solo genius. Daniel and I can work on our projects separately. We are never afraid to give away decision-making to each other, but there is always a time that we come together and talk, adjust or re-do. In that sense we watch each other and build on what the other one is doing, but multiple times during the process we work together, all four hands on the same piece at the same time.” The works in “Apocalypse” reveal the simultaneity of the process. While each piece draws attention on its own, the works also interact as shapes, figures, and patterns jump from one collage to another. Indeed, certain motifs appear in several of the works.

The paper that Rydh and Sörenson use is mainly fine grain, acid free watercolor paper that the duo paints, cuts, and places around the collage. For the artists, even the act of searching for new paper is an exciting endeavor. Sörenson explained the personal connection they have to the paper they use, “We do a lot of artist residencies, so we travel and buy art material in different countries. We can really nerd-out on materials. In the U.S., we found a watercolor paper with glass fiber in it, it’s a new paper, and quite amazing since it doesn’t buckle, so we became obsessed with that for a while. And last time I was in London, I think I bought ten different rolls of paper tape just to find the best for collage making.” Knowing the care with which the artists pick their materials, it was hardly surprising to see the amount of handiwork behind the painting, cutting, and placing of the tiny bits of paper. Each imperfect edge bares evidence of the duo’s meticulous practice and personal touch. 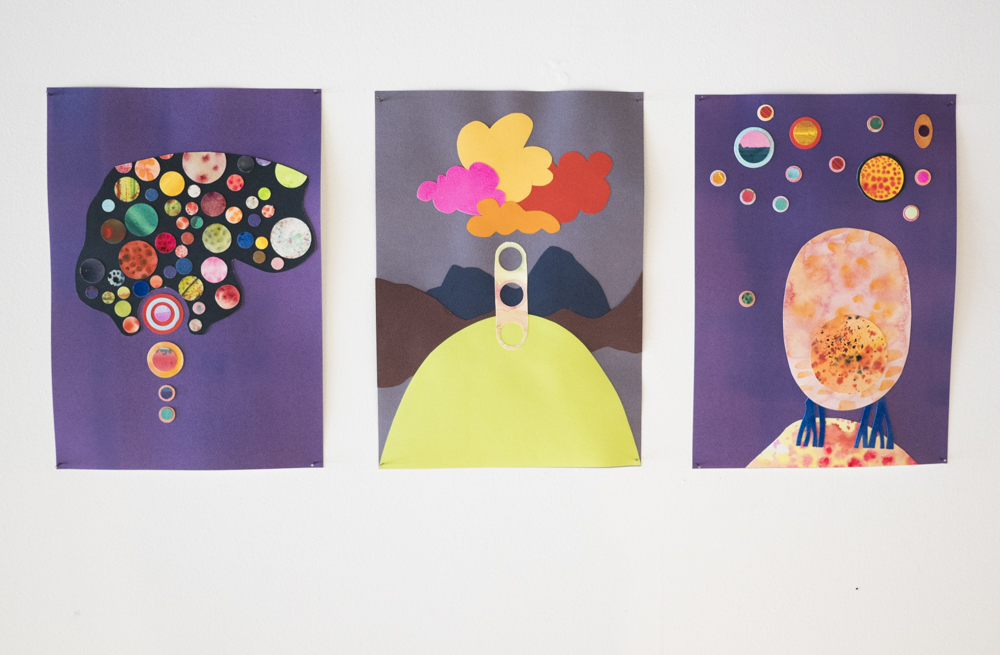 Having only seen Rydh/Sörenson’s works in photographs before seeing the show, I was surprised by how much texture the surfaces have in person. In some cases, it seemed as if I were looking at an entirely different piece. The layers of carefully cut and placed paper become much flatter in photos. This flatness speaks to the post-digital aspect of the collages. Sörenson discussed the relationship between their work and the digital world, “Working on a collage is very different than working on a painting. You have all these pieces that you can move around and layer. In that sense it is closer to work in Photoshop or other digital editing. Your product is in constant flux until you post it online or print it, or in our case glue it down. The post-digital world is also the world we live in, this is a time when we can look at an image and say ‘my computer could have done that’ rather then ‘my child could have done that.’ How we look at the world and how we look at art has simply changed. It is important for us to acknowledge that inspiration doesn’t necessarily come from nature or people, but rather from video games, glitches and internet-memes.” This notion of inspiration that comes from beyond the natural world is key to understanding Rydh/Sörenson’s art. Regardless of how much their figures and scenes resemble images from real life, they are all inevitably creations of the duo’s playful imaginations.

For me, it is this other-worldly quality that makes the artists’ works so memorable. They are joyful and inviting, like a nostalgic image from childhood. Perhaps this type of playful journey is exactly what the art world needs right now–an escape from reality and a moment to forget the growing sense of an apocalypse.