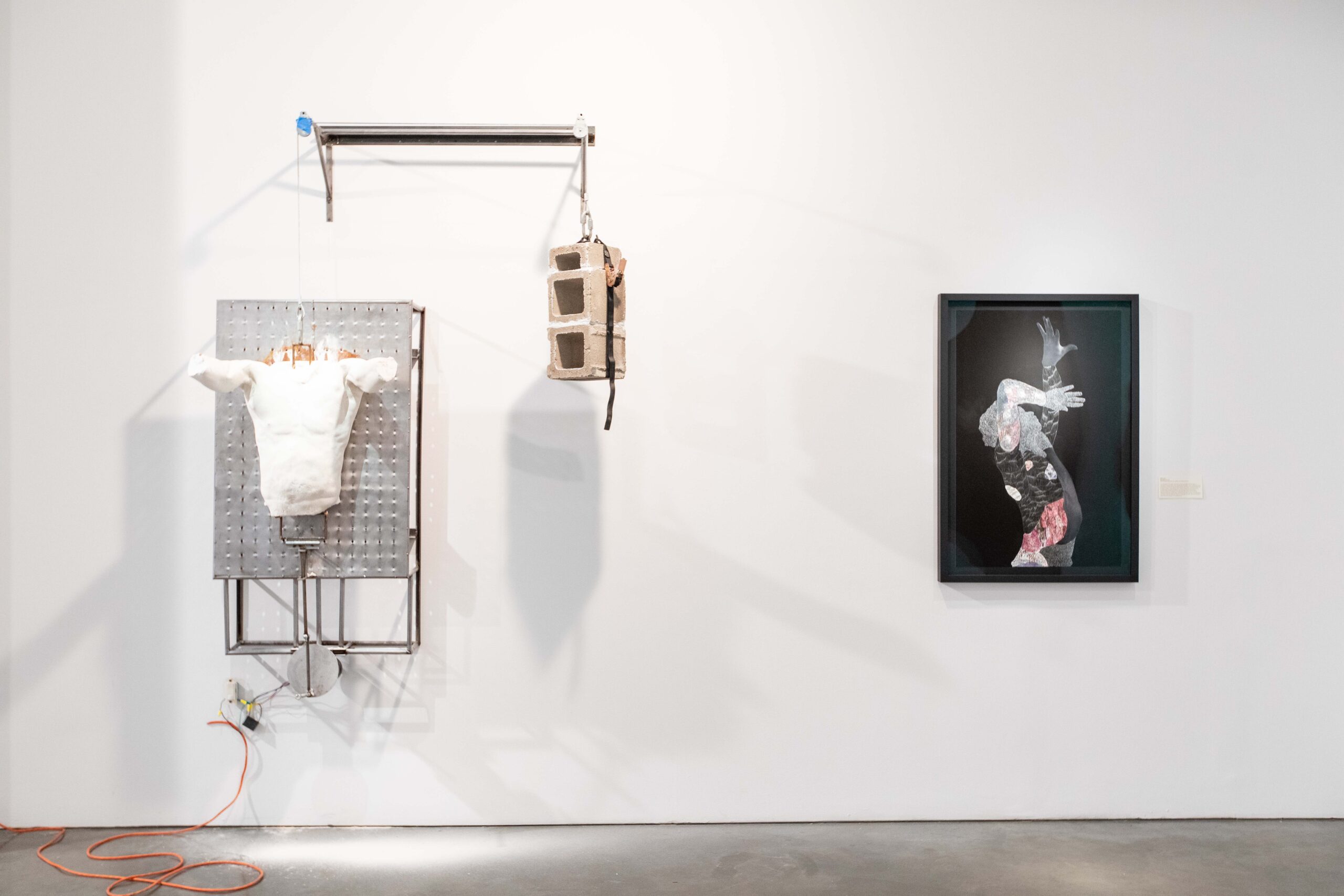 Through protests on the streets, social media, and the news cycle most have become not only acutely aware but also active in raising awareness for, or being complicit in, the racism that plagues the United States. Art is vital in leading us to new conclusions, experiences, and entry points into the tangled topics of racism, allyship, and a multitude of black experiences. In the heart of Chelsea, at Studio 525, VOICES is the first exhibition in New York to engage, display, and contextualize the Black Lives Matter movement since the police killing of George Floyd.

At the far end of the gallery the eerie installation “The Block is Hot” embodies the artist, Jeffrey Meris, experience with the American criminal justice system – a meeting with the NYPD that led to a citation later dropped in court. Using concrete, a nod to Bahamian architecture where homes made of concrete speak to upward mobility, attached to a pulley to balance a suspended punctured plaster cast torso, Meris complex work is a response to his own queries: “What are the conditions to make it possible to make the body visible like this? How is my body being read? What are the things I can’t control about how I exist in space?” An alarming amount of times the hoodie has been signaled as suspicious by police force when it is worn by black men and boys, sometimes with fatal results.

Curator Anwarii Musa has selected pieces by sixteen black artists, whose work touch on documentary, such as Steve Sweatpants, Mark Clennon, and Devin Allen’s photographs from protests and Esteban Whiteside’s oil on canvas Cops Plant Drugs a critique of the police force to more abstract, but equally poignant, commentary on upward mobility, violence versus movement and the display of black care and excellence. The exhibition is presented together with a series of artist talks hosted by art advisor Natasha Roberts – all strong black voices on the art scene.

In her work, that celebrates the female form, French-Senegalese photographer Delphine Diallo aims to capture beauty as she negotiates the social construct of the black body. She was trained with Peter Beard the legendary photographer who had over a six-decade career known for his shots of wildlife in Kenya and Tanzania. A naturalist he constantly strived to find beauty, however, later in his life, his ideals became out of touch – when he decided to forsake Africa he called the people “primitive,” a decidedly colonial term. Also known for his photography of women and supermodels in nature, Diallo admits that his male gaze did not always do his female subjects justice. Despite these racial and gendered political differences, Diallo’s respect for her mentor is great and her work accesses a natural beauty that is informed both by the framework of decolonial theory in which she is well versed and a raw approach to her subjects influenced by her time with Beard. Diallo’s photograph Unity is an elegant and heartfelt reminder that beyond the social constructs of race we are all human.

In 2014, the police killing of Michael Brown sparked a nation-wide movement against police violence women, however, were largely left out of the conversation which is why #SayHerName was founded by activists, scholsrs, the African American Policy Forum. That same year Gabriella Nevarez, Aura Rosser, Michelle Cusseaux, and Tanisha Anderson, all black women, had also been killed by the police. Gihgint erasure, parallel to Black Lives Matter, this social justice movement raises awareness for violence against black women simply by broadcasting their names. By that same token, this summer has put pressure on media and the arts to highlight black talent.

Rendered in watercolor on paper, YoYo Lander’s portrait shows a woman yearning – The Belly of Her Mind is Never Full – as the title describes, for knowledge. Latoya Hobbs has painted her model Kanifwe peering at the viewer through glasses while wearing traditional jewelry with stately airs. These visually striking portraits are considering what they lack, in a sense neutral, without sexual tension or exaggerated beauty they are modern and frankness. Roadmaps for how black women should be viewed by society today – at face value. Using different tactics, Nate Lewis’s work also dispels stereotypes of the black body. The video in the far back shows a man boxing into the air; the action is a movement not violence, laborious not aggressive.

Across cultures, in scholarship and activism, important strides have been made to assert equality and liberation by situating the “black body” within historical discourses, public policies, cultural, and political contexts. Musa observes these multiple and ongoing histories of violence and reparation to the black body, but his exhibition is not a survey, but rather a collage of the multiplicity of contemporary experiences that marked by violence and observant of societal critique are imbued with agency, positive and hopeful.

The exhibition is open through September 8th at Studio 525 and viewable on Artsy.