Doreen Garner is an emerging sculptor and performance artist who has all the right credentials. She has earned a masters from the Rhode Island School of Design (RISD), attended the Skowhegan School of Art and Sculpture, and completed a residency with the Lower Manhattan Cultural Council (LMCC.) Some think it lessens ones work to say that the beauty of the artist helps the career of the artist. I disagree. How the artist looks (inside and out) always affects how he/she/they is received by the audience, particularly when performance of the body is involved. Part of the formula that is at work in the case of Garner is that she is classically beautiful and not afraid to throw her beauty on your face or force you to question the validity of its status.

All of this art-world mapping/predicting aside the key component is still the work. And in this case, “the work” is getting done with fascinating attention to detail and a bold sense of assertiveness. Garner’s sculptures manage to racialize abstract mixed media objects, which on one had remind the viewer of tumors, but on the other hand reminisce of sex and everyday glory. The combination of these elements makes her work both confrontational and seductive.

I recently had the opportunity to ask Garner about her art practice and learn more about what motivates her to create.

AE: How did you come to work with glass?

DG: I was introduced to Glass at Tyler School of Art at Temple University. Like many, I was seduced by the shine, the liquidity, the sharpness, the danger. The material and process activated my artistic voice in ways other mediums never could. It is a fluctuating relationship. Losing and regaining control of the material, I find glass to be one of the most dramatic and responsive materials as a maker. In its “alive” and “wet” state, the interaction provides similar sensations to acts of gained or lost control in sexual dominance. Similar interactions occur between a surgeon and the human body. I consider myself an artist and surgeon combined.

AE: I see your work as an obvious investigation of the beautiful and the grotesque with references to objects I identify as being a large part of black everyday life, such as hair weave.  Where does your own body image and fit into this conversation, if at all?

DG: The investigations of appearance classification in my work have much to do with disconnection and lack of clarity. Many of our visual interests are influenced and sculpted by what society drives into our brains in both blatant and subtle ways. Shapes, colors, textures. Visually, we are encouraged to admire certain qualities while not always able to define why. My own body image enters the work through performance. Many of my performances engage the gaze as a tool to deconstruct objectification and spectacle. I had a studio visit once where a curator watched a video of a performance I did called Unique Revisited. She voiced that the performance wasn’t challenging standards of attraction because I was “beautiful.” How do we define beauty as individuals vs a collective? I know that I am beautiful regardless of how I look on the exterior. But why does she think I am beautiful? My weight to height ratio? My body shape? My facial features? What about these features are beautiful and had this been 1800 something would you still admit that you think I am beautiful? When it comes to thorough descriptions, I’m not sure if we can answer. And the same goes for the grotesque. We’re not able to define beauty without making a comparison to something that is ugly, and how do we define ugliness? The beautiful and the grotesque in many cases are not mutually exclusive.

AE: Makes sense… Sounds more political that pure aesthetics. Although many, including myself, would argue the two are always interlinked. Is there a political voice behind your work? Please explain.

DG: Body Politics are a driving force in my work. Experiences of particular interests are those that reflect my own as a Black woman living in America. The research that I do along with the pieces I create illuminate monstrous physical and psychological acts performed on the black female body both historical and contemporary.

AE: Your performance work holds the voyeur of the black female body accountable for over-sexualizing those bodies.  Where do music and video vixens fit into this dynamic for you?

DG: As a young black woman growing up watching other black women dance in music videos in bikini’s covered in oil, showered with gold and diamonds, I offer alternative experiences and views on objectification, feminism, and spectacle that many of the praised performance artists do not share. Rap culture significantly influences the way I arrange compositions, edit video, adorn objects and develop characters in performances. During the summer of 1996, my younger sister Candace suffered an AVM rupture and was hospitalized for several months. During that time I stayed at my Grandmother’s house which was a meeting place for the rest of my cousins. All of my cousins were older than me. At 10 years old, instead of watching cartoons I was watching Rap videos. During this prepubescent stage in my life, I looked to the figures in the videos to display a standard of what I should be when I became that age. In the early 90’s, hip hop feminism was very influential in developing the demeanor of my current work as well as my current self. At the time, attire was considerably genderless and allowed women to embody the same swagger that was accumulated with wearing baggy clothes, bandannas, and dark shades. Drapery and style distorted the figure, creating a larger, more authoritative, and more mysterious character. At times, I embody an alpha male flair that most rappers possess. Foxy Brown, Da Brat and Lil Kim display similar methods of self-regard. With these models of young females in authority I am able to pose questions about fetish and objectification through my work confidently.  “Who you looking at?“ “Who you calling a bitch?”  Simultaneously,  Video Vixens occupied the context of the music video, serving as a model as well. Scantily clothed showing me the way I should look, the way I should dance. These two representations of women clashed in my mind. One accepted objectification while the other denied and fought against it. Penetration is an important component of my work in physical and non-physical ways. The human gaze disrupts, probes and confuses the power dynamic that exists between “subject” and “viewer”.  I use the penetration of the gaze to disrupt objectification and vulnerability regarding race, gender and sexuality. There is a saying that if two strangers stare at each other for longer than 10 seconds they are either going to “fuck or fight”. My performance The Observatory uses the gaze to penetrate through four glass panels into the soul of the viewer. The Observatory is constructed from a glass box standing on four legs, painted black with a red interior. My nude body is constricted tightly inside of the glass box, slathered with petroleum jelly and glitter along with yellow and pink fiber and stuffed condom links that resemble intestines. I return an objective gaze toward each viewer individually for any length of time that I choose. Presenting the “artist as specimen” I focus on race, ethics and pathology, directly referencing the abduction of Saartjie Baartman also known as “the Hottentot Venus.”

AE: In what ways is your work currently shifting?

DG: Currently my work is changing in scale. I am thinking about ways I can incorporate small components to build larger, more confrontational objects. This requires more bonding agents and is some cases flexible materials to create an expanded sculpture.

AE: Tell us more about your radio show. What can we look for from this project in the upcoming months?

DG: #TRASHDAY is a radio show hosted by artist Kenya Robinson – K(Rob) – and myself Doreen Garner – doederek – on Clocktower Productions at Pioneerworks. WE TALK SHIT ABOUT TRASH! Each second Sunday of every month we come up with a theme that may or may not have to do with calendar holidays or the season of that month. Previous show titles include “What up Fam!” ,“That 90’s Though Block Party”, “Who You Callin A Bitch” and the most recent “Ho Hoe Beaux  . January’s #TRASHDAY was “Confessions of the ART WORLD” with an anonymous hotline (828) 3RA-CHET. You can listen to past #TRASHDAY broadcasts at: http://clocktower.org/series/trashday The next broadcast will be Sunday March 13, 2015.

To learn more about the work and upcoming projects of Doreen Garner visit:  http://www.doreengarner.com/  To buy her wearable art on Etsy visit: https://www.etsy.com/in-en/shop/fleshfluid  Also be sure to look for her work during Armory Week at VOLTA art fair, March 2nd – 6th as part of Something I Can Feel, curated by Derrick Adams. 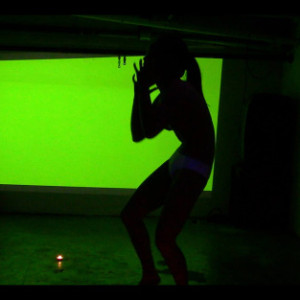