Annika Connor is an impresario of the arts with an uncanny ability to mobilize through her painting practice but also her organization Active Ideas Production. She wears many hats: painter, actor, curator, publisher, producer, socialite, and activist. The Southern belle, hailing from Georgia, works out of her studio in DUMBO, Brooklyn. The painter describes the lavish interiors, dreamy cityscapes, dancers, and enigmatic muses that populate her canvases as “contemporary romantic.” Not shying away from change, her primary medium was water color until she spent time at the Royal Academy of Fine Art in Stockholm where she rediscovered oil paints. Although her painting practice has developed, it was not until the election that her motifs dramatically changed towards the political. Artists have the opportunity to both communicate the rage, shock, and dismay many liberals feel after the election but also to mobilize through their artistic practice – this interview serves as a first-hand exploration of these developments.

At this point of rupture in her painting practice, Cultbytes met with Annika Connor to discuss arts activism, feminism, and the new direction her art is taking. 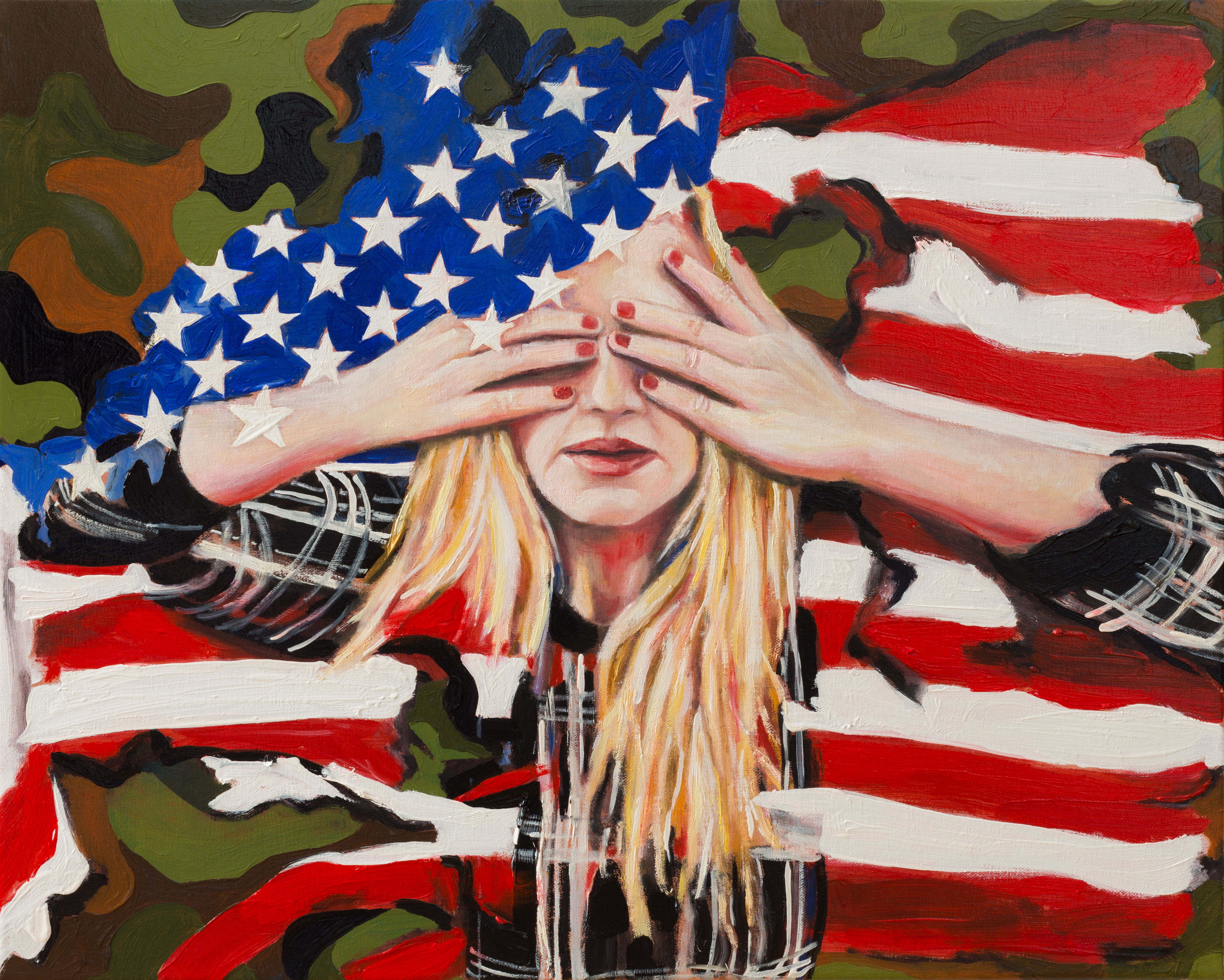 Cultbytes: Your piece “American Angst” was part of the Uprise/Angry Women show at The Untitled Space. Did you make the piece specifically for the show?

Annika Connor: Yes. My piece “American Angst” was specifically created after the 2016 election for the Uprise/Angry Women show at The Untitled Space. In this painting I sought to express both my stupefying sense of frustration and my hopes that we can fight past the fear and hatred blinding our nation. While the figure is filled with inner turmoil, the camouflage pattern is meant to suggest a backdrop of strength and willingness to fight against the ignorance harming our country today.

The exhibition received a lot of great press, congratulations. I think artists will be very important in the resistance, not only to create the images that will visually represent the fight but also forming collectives to promote civil rights and to take part in fundraising. Parts of the proceeds from Uprise/Angry Women will benefit the ERA Coalition. Why is an exhibition like this important to New Yorkers and the world?

AC: Showcasing and supporting feminist art, especially in the wake of the election and inauguration is vitally important. The new administration has taken us flying leaps and bounds backwards in terms of progress, feminism, and all manners of social justice. I can’t stay silent. The Uprise show at The Untitled Space which Indira Cesarine curated gave me and 79 other artists the chance to visually demonstrate our outrage. 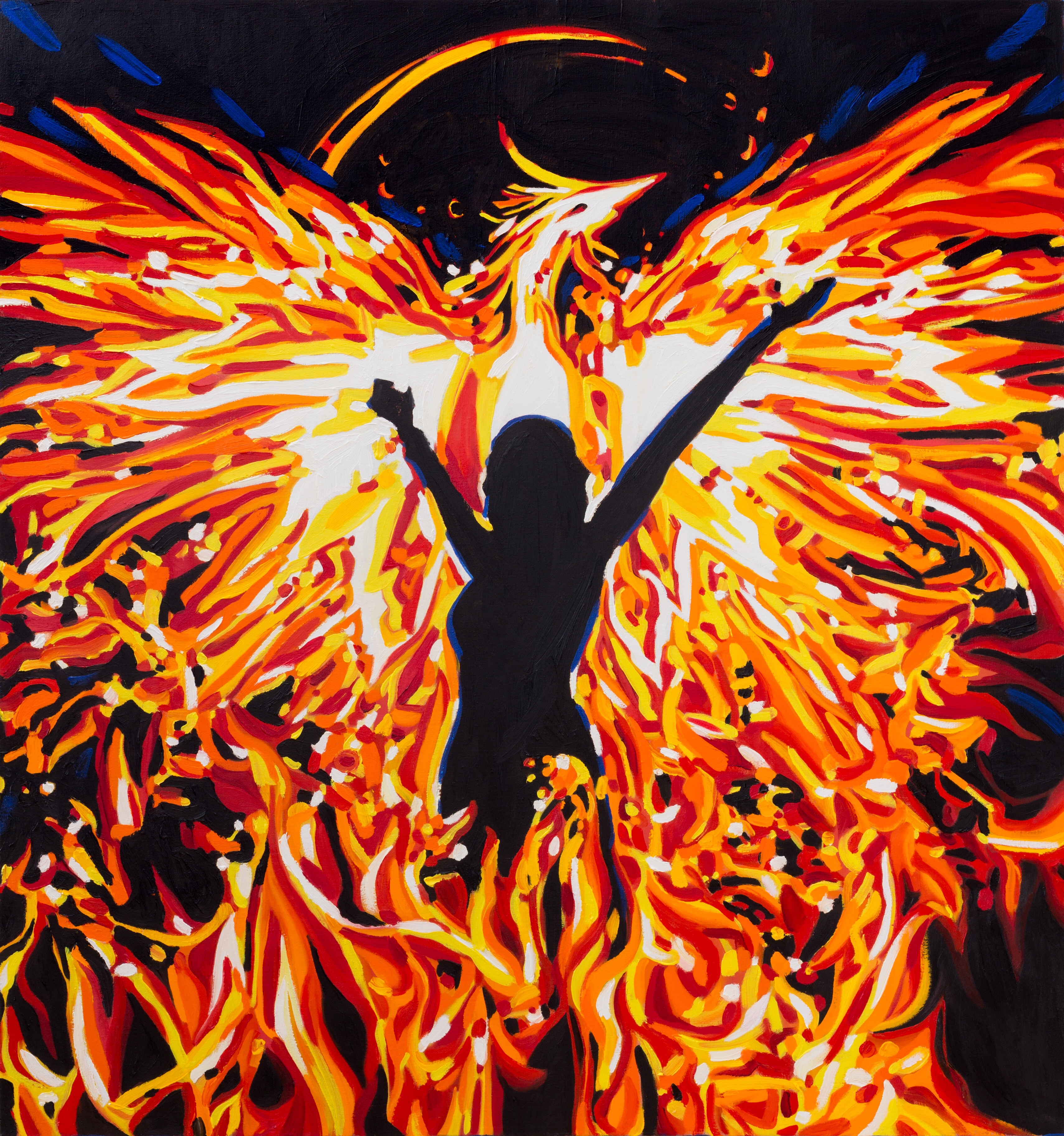 An article covering the exhibition was published in the politics section of TeenVogue, serving as an inspiration to young women. “Phoenix,” another one of your political pieces, is a silhouette of a resilient woman emerging from flames “a hopeful vision of strength.” Is the future female? What role or responsibility do women have these next four years?

AC: Female or male we all have a responsibility to stand up for what we believe in and to fight to make the world the best place we can. We have to all strive to rise up against injustice and stand strong for our values and lend a hand to those in need. If we can collectively do that (especially over the next four years) then the future will be better.

You also asked me will the future be female? To that I can only say I sincerely hope so. It breaks my heart the way the feminine voice keeps getting silenced and shushed. I desperately want to change that and do whatever I can to fight for equality for all and to demand respect and justice for women everywhere.

The politically influenced works you have been painting depart from your previous painting practice as a ‘contemporary romantic painter.’ Personally, I am very fond of your interiors of The Frick and other lavish places. You currently have four politically charged paintings featuring American flags in your studio, how many more will you paint?

AC: Who knows! If I could see ahead and knew what I would paint next the challenge and mystery of the studio would be far less enchanting.

The need for me to make political art didn’t boil up so strongly in me until lately. Like many Americans my world has changed drastically since November 9th. The call to action loudly rang in my ears and picking up my painting brushes to protest my objections and process my emotions and frustrations seemed the most important and instinctive response I could do. 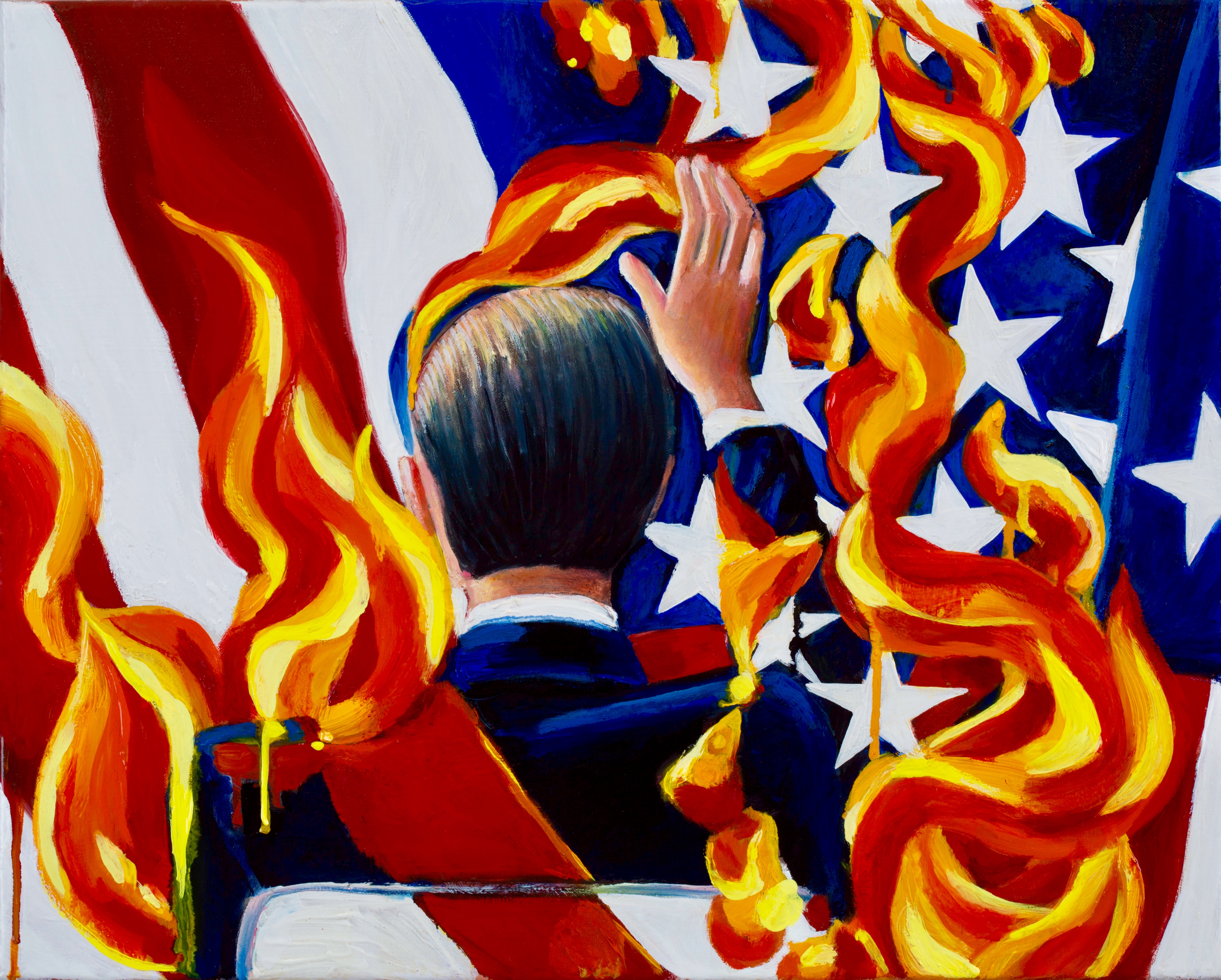 The word ‘feminist’ is a contested term, there are many men and women who are pro-gender equality yet hesitant to label themselves feminists. You eloquently said: “you don’t need to be a woman to support women’s rights,” I loved that. Are you a feminist and why is it important to use this term?

AC: Of course I am a feminist! Unfortunately it’s true so many people are afraid of the word feminism and attaching all sorts of negative meanings in their mind but that is a way they push down the movement and try to marginalize those fighting for our rights. Fortunately, the fear of feminism is lessening and more people then ever are embracing the fight for female equality and standing up to demand action to protect women and women’s rights. 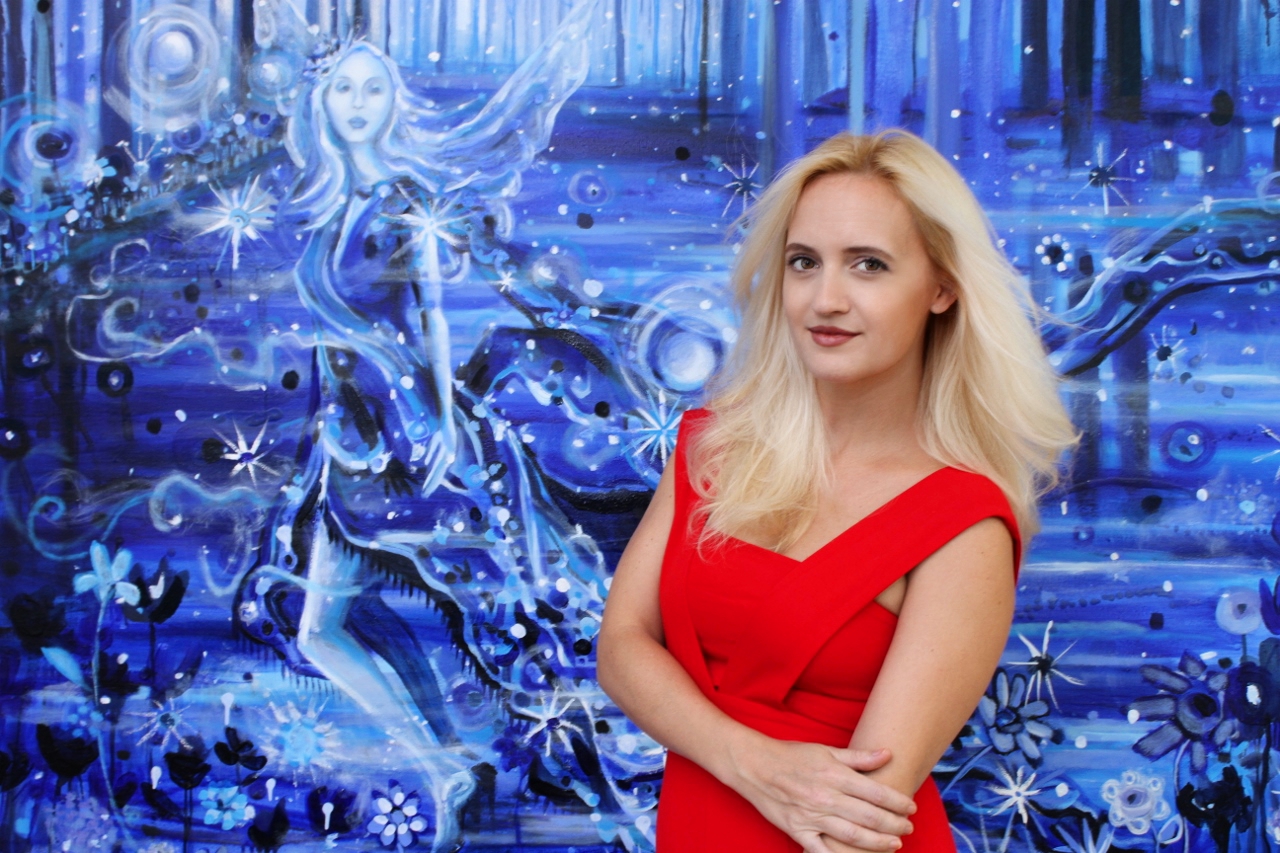 Annika Connor in her studio.

You are the founder of Active Ideas Productions, under its guise you have published books, produced events, and exhibitions that promote and engage in conversations that help artists navigate the politics of being an artist. You have sparked important conversations on topics often overlooked by the art world, such as how to innovate artistic collaborations with the business world through your series of panels. When did you start identifying as an activist?

AC: Hmmmm good question. I am not sure I can pin point a date. Like many artist I’ve been entangled in idealism for a long time. Plus I tend to be a bit of a bossy pants and have always been vocal about my views.

AC: I am not sure. I formed my company Active Ideas Productions in order to have a separate entity from artist Annika Connor. I found it helpful to allow myself on one hand to wear the business hat and the other to wear the artist cap. It’s been useful to have the company as separate for a variety of reasons and I am excited to see what new directions it develops in the coming years.

Earlier we talked about humor. Before the election you produced a comic political skit called ‘Let’s Go Blue,’ encouraging people to vote for Hillary Clinton. Now you are working on another skit. What role does humor play in activism and what brought this on?

AC: Comedy these days is wildly powerful. It’s amazing the way that comedy is being used right now to open the eyes of the audience it entertains. I am very interested in how ideas are communicated with laugher and I am in the process of writing sever short skits that employ humor as a tool while I am acting for activism.

Are these videos part of AI Productions?

How do you suggest that artists can involve activism in their artistic practice and/or life?

AC: Listen to what moves you and create from a place of passion.

If you could pick anyone, who would you like to collaborate with on your next activist project?

AC: Bob Dylan. It would be a dream to collaborate with him.

Paddle8 will be accepting bids for works in the Uprise/Angry Women exhibition until February 20th, 2017. Proceeds will partially benefit the ERA Coalition Fund for Women’s Equality.

A Fresh Take on the Meaning of Space at Revolver Galería